From sophomore to senior, one student was randomly chosen to tell their story 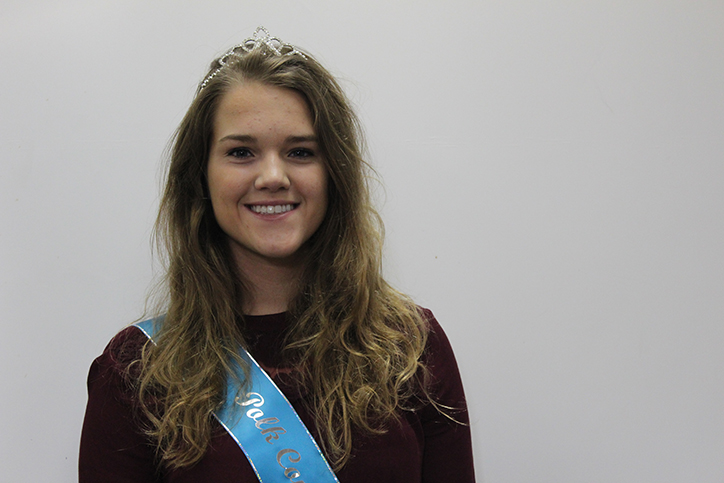 Standing on the stage, Jessica Bigelow ‘17 was hand-in-hand with the other Polk County Fair Queen contestants waiting for the very moment for the name to be announced. When the name finally poured through the speakers, Bigelow could not believe she had won. “When they placed the crown and sash on my head, It was at that moment that I realized all my hard work had finally paid off,” she said. “It was the greatest feeling ever.”

Bigelow, however, believes that it’s not just about winning a crown and wearing a sash but about how she can make an impact in one girl’s life by showing her that she can accomplish anything she sets her mind too. “The greatest part about being crowned is the impact I am able to have on my community,” Bigelow said.

Besides the pageant scene, she is involved in a multitude of other activities, including cross country, soccer, bowling, Iowa Youth Congress and is also a member of the Bankers Trust Youth Board. “I have like always lived this mentality that if I’m not doing something every day I’m not reaching my full potential,” she said.

Growing up, Bigelow looked up to pageant queens. She hoped one day to be in their shoes and use the platform to help better the lives around her. “My goal this year was to say yes to as many opportunities as possible,” she said.

Bigelow has had many of those, such as speaking to numerous elementary schools and at the 4-H Foundation Legacy Awards Gala.

In order to become Polk County Fair Queen, Bigelow had to meet the judging requirements of leadership and citizenship, interview, application, and participation and experiences in 4-H or community. Bigelow has been involved with 4-H Polk County counsel and 4-H State since fourth grade. “4-H has really been a great organization where I have been exposed to so much,” Bigelow said.

4-H is a youth program for fourth grade students up to their senior year in high school that focuses on teaching kids life experiences such as setting and reaching goals as well as developing valuable skills and being involved and giving back to the community.

Her mother, Jo Ellen Bigelow has been following her daughter in her very active journey over the past nine years of being actively involved in 4-H. “It was exciting while waiting and then proud that she was acknowledged for all of her accomplishments in 4-H when crowned,” Jo Ellen said.

Bigelow has made it a priority to use what she learned from 4-H by attending meetings with the Bankers Trust Youth Board on how to inform youth about the importance of banking. In Iowa Youth Congress, she meets with legislators and informs them on issues important to Iowa youth.

After being crowned Polk County Fair Queen, Bigelow spent the whole week volunteering at the Iowa State Fair. This included handing out ribbons to the winners of different events such as the sheep show and the kid’s tractor pull. Bigelow also helped out with cooking at the pancake breakfast.

The 2016 pageant was Bigelow’s second time competing, having come in second the first time. Now that she has won, she can no longer compete. For her, it is just another step towards her goals. In the fall, she will attend Iowa State University (ISU) to major in business and hopes to one day start her own non-profit organization.