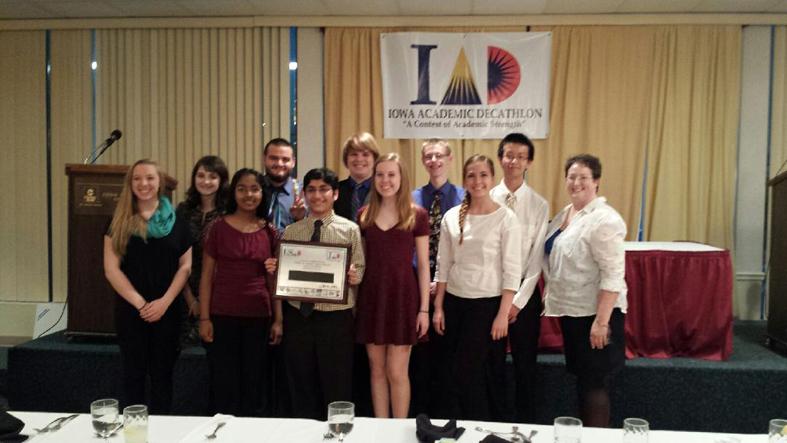 Academic Decathlon members pose for a photo holding their second place plaque from the state competition. Out of the eight team members, seven were all awarded medals and all team members placed within the top 13 in their divisions.

In addition to their placing, seven of the eight team members were awarded medals in their events. In the honors division, freshman Aditi Jithendra placed third in math, second in social sciences with third place overall, senior Jack Dolde placed second in science, second in language and literature with fifth place overall, and sophomore Afshan Chandani placed first in essay with ninth place overall.

The team’s score at state was their highest score ever in school history. “This year’s team was incredible,” Smith said. “It was amazing to be a part of it.”

Since the team won second place at state, they were able to continue on to nationals. Unlike first place winner Cedar Rapids that traveled to the national competition in Garden Grove, California, the team is staying here and taking their tests online. The first set of the 30 minute long tests as well as the 50 minute long essay took place Mar 31 and the last set of tests are scheduled for Apr 17.