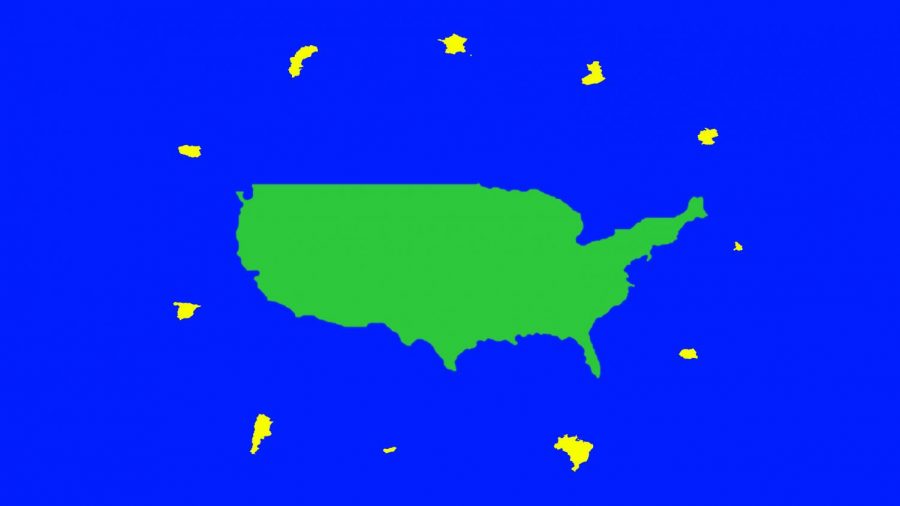 Eighth grade history covers the colonies to the end of the Civil War. Ninth grade covers the Reconstruction to World War I. Tenth covers world history, and eleventh is a comparative overview of all American history. Twelfth covers government and economics.

The United States is only 244 years old. By comparison, known world history goes back more than 10,000 years. Yet, from eighth grade to senior year, there is only one world history class; the rest are American history. There is no reason that we should continue to learn exclusively U.S. history in a world that involves more than the United States.

The lack of world history is just plain wrong. It promotes a society ignorant of foreign cultures that reflects poorly on the United States. Realizing that the United States is the current overseer of global cooperation, it is a necessity to include more global-oriented history in order for Americans to understand America’s role and position in the world; become more aware of the United States’ motives and interests; and be more aware of the causes and potential impacts of such situations as the Syrian civil war, the Iran nuclear crisis, the annexation of Crimea, and the Israeli/Palestinian conflict. An added benefit to an educated population is that when Americans understand the way modern countries interact with each other, they are less likely to elect a politician prone to blundering his way through diplomacy and politics in general.

Like so many other things, the focus on U.S. history began with good intentions. “I think the primary purpose is actually rooted in the purpose of the American school system in the first place,” world history teacher Sue Cline said. “The American public school system was designed as it is in the Industrial era… since they were working with immigrants, one of the major purposes was to make sure everybody’s got English, and that everybody understands American history, American government, all that, because many of them didn’t come from our system from birth… and I don’t think I’m misspeaking to say that there was an overt effort to increase patriotism,” Cline said.

“[Public education was designed] to take a nation of immigrants and produce a set of people who will be appropriately trained to serve in industrial jobs,” Cline said. The focus of American schooling, then, wasn’t in quality education, but rather one that prepared citizens for a basic job. With that goal in mind, learning about foreign history was not important.

But, like everything else, times have changed. Industrial jobs are no longer the norm; the labor market now demands highly educated workers for the service industry. Globalization means that people are not isolated from the greater world anymore; traveling the world is common and achievable, and at some point in their lives, everyone will encounter someone from a different background.

When American tourists visiting other countries are blatantly ignorant of everything that is not American, it reflects back on the United States negatively and builds the stereotype of the ignorant, hyper-patriotic American tourist whose indoctrinated patriotism unwittingly insults everyone else in the room. I say ‘indoctrinated patriotism’ because the stereotypical American does not understand the concept of the United States being imperfect or ever having done something regrettable. Instead of having an educated debate about, say, politics, they will just spout about how great America is and how unfortunate everyone else is not to be living in America.

Before you head to the comments and rant about how that is not at all how Americans behave, that is simply the stereotype – and while it is hardly representative of all Americans, enough American tourists fit the said description when visiting other countries that that is just how the stereotype has developed. Many foreign countries do not actually appreciate American tourists all that much because the ‘America’s the best’ nature of many American tourists is off-putting to the locals. To be fair, though, American tourists tend to have a deep pocket, making them very welcome to many locals – just not for prolonged stays.

How do we solve this problem? First, we have to define exactly what the problem is. The problem as this: the American history program neglects to teach American citizens enough about the world in general. Instead, it focuses on American history and emphasizes – some might say exaggerates, or at the very least overstates – American greatness and importance. The result is that American citizens, when traveling abroad, come across as being stereotypically ignorant and being unreasonably (that is, toxically) patriotic.

Introducing more world history options could help this, but the education program itself is not necessarily to blame. Instead, it is the America-centered approach designed to build patriotism that is at fault. World Studies teacher Dale DeJong has a solution for that. “It is important that we know our own history but at the same time we are becoming a globalized world and we need to understand how to interact with other nations,” DeJong said. “We should keep a focus on 21st century skills with the mindset that we are in a globalized world… it’s not so much about the classes, but rather the focus of the classes because as great of a country as the U.S. is, it isn’t the only country in the world and it wasn’t the first great country, and we need to know more about the world in general in order to succeed in a more globalized world.”

They are both right. The American method of teaching history is outdated; no longer are factory jobs the norm, nor is a stationary life away from other cultures. Travel has been revolutionized by airplanes, the rise of the tourism industry, and the Internet; encountering other cultures is inevitable, and traveling to another country is almost a rite of passage for the retired and well-off of this nation. Instead of centering our history program on American history and (exaggerated) greatness and importance, we should reengineer our history programs – at least one – to include a focus on globalization and the nature of the modern world, in order to better prepare our people for the social demands of the modern world.