The Black & White • May 5, 2015 • https://jhsblackandwhite.com/athletes-awarded-at-drake-relays/ 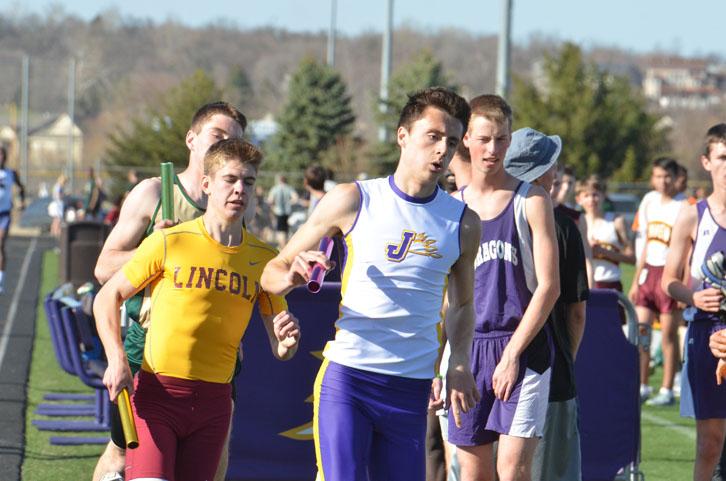 Senior Josh Borwick runs a leg of the 4x800 meter relay at a home meet. Borwick represented the high school in races at the Drake Relays as well.

High school students competed at the Drake Relays April 23, 24 and 25. High schools from across the state came together in Des Moines to compete at the annual meet. Runners qualified for the meet at most regular meets if they ran a time that met the qualifications.

The boys placed well at the meet, breaking three school records. In the individual races, sophomore Patrick Bose placed fifth in the 3,200 meter run with a time of 9:25 and also broke the existing school record. “That was really a big deal,” boys head track coach Patrick Mattingly said. “He came in 19th overall and ended up fifth, a huge improvement.”

Also breaking a school record,  senior Josh Borwick placed fourth in the 1,600 meter run with a time of 4:22.

The boys placed second in the 4×100 with a relay made up of sophomores Grant Gosseling, Carter Wuncsh, Jonny Pater and senior Jared Seay. The 4×800 relay team was made up of freshman Grant lair, junior Braden Cooper and seniors Josh Borwick and Ben Renner, and they finished second.

Another school record was broken by the distance medley relay team that placed third. It was made up of sophomores Jonny Pater and Gannon Svetska and seniors Jared Seay and Josh Borwick.

The girls were represented in the 4×800 relay made up by juniors Anna Toot, Maddy Bradley, sophomore Biz Foutch and freshman Jessica Mckee.  Toot also participated in the 1,500 meter run.

Although the weather was not ideal for the athletes, the results remained what they were looking for. “The kids get really excited about being on the blue oval and that experience,” Mattingly said. “They know that more people are watching (and) coaches from colleges are paying attention. That really benefitted us this year especially because we had good results.”

Although the Drake Relays is a larger meet, it is only the beginning of track season with districts and state to follow.