The Black & White • May 18, 2015 • https://jhsblackandwhite.com/avengers-age-of-ultron-a-satisfying-sequel/ 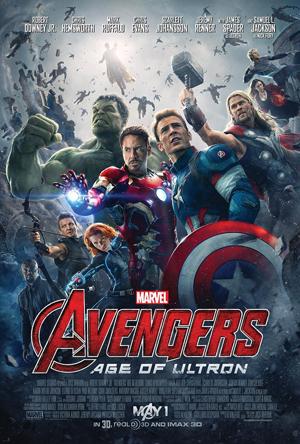 As I mentioned in my “Daredevil” review, I love superheroes. I also love dark stories rather than colorful, made-for-kids things.

Luckily, “Age of Ultron” pandered to both those loves, giving me an experience very different from when I saw the first “Avengers” back in 2012.

“Age of Ultron” went above my expectations. I can’t explain why I thought it would not be good, I just simply expected to be disappointed. I can happily say that I wasn’t. I had fun watching this movie, and one could argue that it is better than the first, although it isn’t perfect.

The main thing that holds this movie up is it’s cast. The Avengers themselves have wonderful team chemistry and their banter and camaraderie feels very real. I would point out notable performances, but everyone did a tremendous job so it’s hard to mention just a few, although Mark Ruffalo as Bruce Banner/the Hulk and Jeremy Renner as Clint Barton/Hawkeye did stand out a little bit more than the others.

Outside of the Avengers, there was still good acting to be found. I really loved the introduction of twins Wanda and Pietro Maximoff, also known as Scarlet Witch and Quicksilver, into the Marvel film universe, but I felt as if they were wasted. That being said, Elizabeth Olsen (sister to the Olsen twins) and Aaron Taylor-Johnson were still pretty awesome with the amount of screen time they were given.

The performance that stands out the most is Ultron, played by James Spader of “The Blacklist”. Although Spader lends only voice and motion capture for the part of Ultron, he still puts everything into this role. He’s very menacing and the stuff of nightmares, yet talks casually and sarcastically to the other characters, and even occasionally sings a creepy rendition of “I’ve Got No Strings” from Disney’s Pinocchio many times throughout the movie. He makes Loki look amateur in comparison.

Compared to the first film, “Age of Ultron” is larger. It has bigger cast, villain and scale in general. The first film was confined to two set pieces, New York and the hydroplane, but this sequel takes the Avengers everywhere. From the city of Sokovia to Seoul, the Avengers face consequences for the damage they do and they make references to past films, by bringing in characters and plot lines featured in Marvel films that came out within the last year.

Although I am giving “Age of Ultron” a positive review, I do have some problems with it. This mostly has to do with the treatment of some characters. I’m trying to keep this spoiler-free, but I can’t help but voice my anger at what was done with Scarlett Johansson’s Black Widow. She has a lot of what made her character interesting stripped away for the sake of her having a romantic subplot with one of her fellow Avengers. However, that is a discussion for another time.

Other characters felt underused. There didn’t seem to be a lot of focus on Thor this time around, and that was displeasing as he is a favorite of mine, plus Chris Hemsworth is a fine actor. As I mentioned before, there was little focus on Scarlet Witch and Quicksilver, so they are not well-developed enough for me to get as much of an emotional response as I should when a very important scene regarding them happens near the end. Even though I mentioned Jeremy Renner’s acting as Hawkeye to be very good this time around, I am still on the fence about the character decision they made for him (you know what I’m talking about if you’ve seen the movie). Along with all of that, there were some characters I felt didn’t need to be there at all, and took away from the main group.

Due to this film being larger in scale, there is also a large amount of characters. The comic universe is full of characters that Marvel Studios has films covered until 2020. There was not enough time for each Avenger to shine and I felt slightly overwhelmed by all the people to keep track of. Although after I got out of the theater I was kind of a hypocrite because I was wishing for a crossover between the Avengers and the Guardians of the Galaxy (let’s be real, that would be awesome).

I like the Marvel movie universe, its’ characters are distinct and holds a world of its’ own. I’m always excited for a new Marvel movie and, as I mentioned above, they have movies in development up until 2020, so I will be quite busy for the next five years. “Age of Ultron” was a flawed but overall rewarding addition into Marvel’s long lineup.