Behind the scenes of science dissections 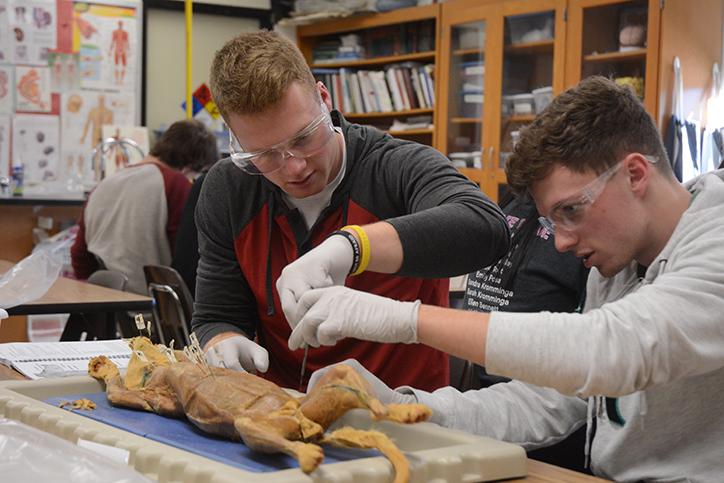 Seniors Dallin Russell and Noah Richards dissect a cat during Anatomy. The Anatomy students have been dissecting cats during second semester.

Many science classes such as Biology, Anatomy and Physiology allow students to have the experience of dissecting an animal. Biology students dissect fetal pigs, while Anatomy and Physiology students dissect a wide variety of things from cats to sheep brains. Before these animals (and certain body parts of animals) end up at the lab tables to be dissected, there is a process they have to go through.

Once aware of the dissecting dates, science teachers place their orders for the animals through the school district. The Biology, Anatomy and Physiology classes receive their animals from different companies; Carolina Biological Supply Company and Sargent Welch, respectively.

The companies process the orders and they are shipped as soon as possible through carriers like FedEx. “[The animals] are processed very quickly upon receipt because freshness is essential,” Keith Barker, manager of product safety and Compliance at Carolina Biological said.

Carolina Biological sells a wide variety of animals for dissection, such as lobsters, earthworms, fetal pigs, cats and many more. The prices range anywhere from $2, to upwards of $150. Some of the animals available for purchase are invasive species, so removing them from the environment helps the local ecosystem. Other animals like the turtles dissected in Kyla Burns’ Animal Science class are from farms where they are already raised for food. “The turtles can either be sent to a meat source, or they can be sent for dissection,” Burns said.

Junior Matthew Terrell is in Burns’ Animals Science class, and has the experience of dissection many animals including turtles. “It wasn’t easy,” Terrell said. “We had to break the shell and pieces went flying everywhere. It wasn’t a good day, but we learned a lot from the dissection.”

Other students have had other unique experiences with dissections such as when Senior Samantha Sobel dissected a starfish in Advanced Animals. “I got some of it in my mouth,” Sobel said. “It’s didn’t taste so good.” Another time she was dissecting a pigeon in the same class. “I was singing ‘fly like a pigeon’ while flapping the wings of the dead bird,” Sobel said.

The fetal pigs that are dissected in Biology classes are a byproduct of the pork industry; they are not raised with the purpose of dissection. When pigs go to the slaughterhouse, sometimes the female pigs are pregnant, so rather than throw away the babies, they are delivered to science supply companies like Carolina Biological. “[The fetal pigs’] lungs are still collapsed, so you can tell they haven’t been up and running around before we get them,” Biology teacher Lisa Horsch said. The price of fetal pigs varies from $18.25 to $29.

The cats used in Anatomy and Physiology classes mainly come from animal shelters. “A lot of times [the cats] are not adopted or deemed un-adoptable because they have some sort of issue, and the animal shelter doesn’t have the money to treat them so they’re put down,” Anatomy and Physiology Dustin Mead said. After the cats are put down, they go to the science supply companies. The price for the cats varies from $57.25 to $80.50.

After the animals are brought back to the company facilities, they are prepared for classroom dissections by draining blood through slices in the arteries. This is necessary so that future dissections will be cleaner, and the animals can get dye injected into their veins and arteries if necessary. The animals are then soaked in multiple preservatives and chemicals to ensure freshness, for safety purposes. The preparation process takes around two weeks for a fetal pig.

To ship the animals to school in buckets of nontoxic chemicals that keep the preservatives fresh. They get to school in the beginning of school year, and remain in various science supply rooms until they need to be used.

Despite many students’ mixed opinions on where dissected animals come from, they all agree that dissecting animals is a unique experience. “I thought [the dissections] were very fun, and informational,” Sobel said. “I do better with hands on with learning, so it was great.”