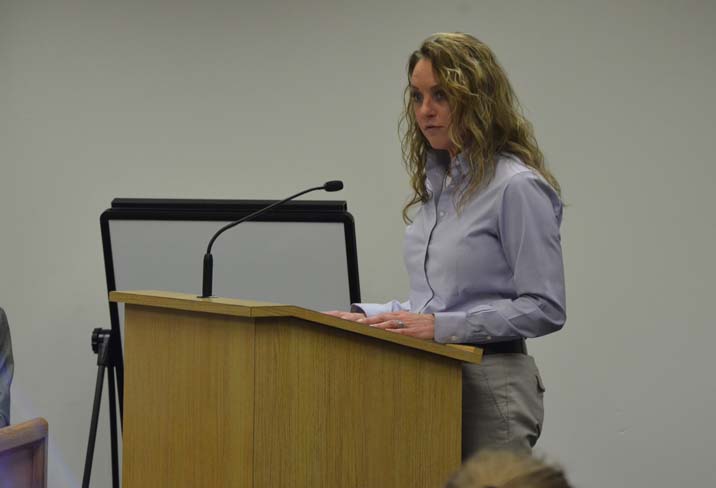 High school nurse Susan Krebs presents her concerns to the school board about the possible safety hazards of having health aids at some schools in the district and not certified nurses.

The Board of Education held a five hour long regular meeting Wednesday, March 12. Students and parents brought their concerns to the board about the recent budget cut draft list; the main points that were brought up from the community were the replacement of one full time employee nurse with one full time employee health aid, eliminating seventh grade athletics, and the transfer of one full time employee vocal position at the middle school to a substitute. Eighth grade vocal music director Laura Fog would have her position taken away, and she would be moved to a full time substitute teacher in the district. The nurse that would be replaced with a health aid was not decided at the time.

Board president Greg Dockum started off the meeting assuring the board and the people attending that the list put out to the public was only a list, and that the finalization of the cuts was March 31.

“From a board perspective, this process is just beginning,” Dockum said at the meeting. “There has been no decision made on that list at this time.”

Parent Kari Dostalik voiced her concern of the vocal music position. “I’m concerned that this will set a precedent, and that next time budget cuts come around it’s just an area we can keep cutting,” Dostalik said during her speech. She compared this budget cut with that of West Des Moines Valley School District. “From what I understand they laid everything on the table for parents to come ahead of time and voice their input before a draft was presented. And I feel like there was a lack of transparency here.”

Another parent, Shanda Carstens, expressed the way vocal music and athletics have impacted her children. “(My daughter) would miss maybe eight days of school a year because of sickness or headache, and this year, she’s missed none because Laura Fog has been here for her,” Carstens said during her speech. “My son, although I think he’s a stellar athlete, may only have this chance in seventh or eighth grade to play basketball. The competition here is tough in Johnston, so this might be his only opportunity to play school ball.”

Carstens also brought forth her concern of the replacement of a nurse. “My third child just went through an emergency appendectomy,” Carstens said at the meeting. “The only reason I felt comfortable sending her back to school when the surgeon cleared her was because [school nurse] Keri Meyer is on the other side and waiting for her.”

Eighth grade students Gavin Sullivan and Seth Diehl also stood up to talk about the way Fog has impacted their year as choir and show choir students. “Today over 300 students at JMS signed a petition to support the following points and Ms. Fog,” Sullivan said at the beginning of his speech.

Diehl went on to talk about the success of the music programs. “Not only has Ms. Fog contributed to our choral development, but towards our development as young citizens at Johnston,” Diehl said during his speech. “The best way to support the arts program here at Johnston is to keep quality teachers such as Ms. Fog, not terminate them.”

Sullivan urged the board to listen the concerns brought forth. “I hope that you do not dismiss our concerns as just coming from some kids,” Sullivan said during the meeting. “But rather that you take them to heart, and know that they are coming from those who care about their education.”

Diehl and eighth grade student Josh Marckmann started the petition with the help of Diehl’s father. Everyone on the petition agreed to the points that Diehl and Sullivan made in their speech. “I think the petition and our speech was well received by the board,” Diehl said. “I think it wasn’t just our speech, it was the collective support of the vocal music program as well.”

Krista Gorsche, another parent of students in vocal music, urged the board to look at the choir class sizes. “Mrs. [Ninth grader choir director] Ryan is fabulous, but she can’t take over an eighth and ninth grade choir,” Gorsche said during the meeting. “Hope Lutheran Church, where the eighth and ninth grade had their choir concert, filled, and that’s a mega church. Our choir department is huge.”

Gorsche stated that over 400 students are impacted by choir, and that putting that all on Ryan would not be beneficial. “We want our more kids to be in choir, not less,” Gorsche said while making her speech.

Other issues were brought to the board’s attention regarding the budget cut draft lift, including the possible cut of seventh grade athletics.

Parent John Tack emphasized the meaning behind young athletics. “What you see in seventh grade athletics is for a lot of kids, this is the first time that they’re not in a Sharpshooter in the Clive basketball league, or their not a Maverick in the USSSA baseball league,” Tack said at the meeting. “They’re Johnston Dragons. It’s heartwarming to see how big of a deal that is to them, it’s a link to their classmates, their school, that they don’t have before that.”

Tack went on to say that participating in seventh grade sports might be the only chance they have to compete as a Dragon. “If you take away that one opportunity for them, it’s just done,” Tack said during his speech. “That chance to bond with their peers and their classmates in this way is over at that point.”

The high school nurse, Susan Krebs, stated her trouble with the replacement of a nurse at an elementary school. “Under Iowa Administrative Code, in the state of Iowa unlicensed health associates cannot have the authority, and have not been trained, to perform initial assessments on problems,” Krebs said during her speech. “For example, if a student were to sustain a head injury at school, health associates should not, and legally cannot, perform a neurological assessment.”

Krebs informed the board that registered nurses are needed at school, all the time. “Never has the role of a school nurse been more important as we deal with increased complexity of physical, mental, emotional and social health,” Krebs said. “A registered school nurse enables even a medically fragile student to attend school.”

Executive Director of Human Resources Tom Mitchell gave a 2014-2015 Staffing Plan presentation to the board during his report. The main things that are projected to change are the number of elementary class sections to decline as well as requiring the teachers at the middle school and high school teach seven out of the eight periods rather than six out of the eight. The reason for this is that the district does not want to add teachers to the next school year because that would add more expenses.

In his presentation, Mitchell stated that although he does not enjoy to make the budget cuts, he must. “This is nothing that we want to touch but what we’re planning and presenting to the board is in some areas we might be asking some of our teachers to teach seven of eight,” Mitchell said. “You know we’d like to give our teachers half time teaching and halftime preparation but we’re not funded that way.” At the end of the presentation, the board approved the staffing plans.

Near the end of the meeting, Superintendent Clay Guthmiller talked to the board about how they came about the draft list and what they looked at in order to make a draft of the budget cuts. “I don’t believe we’re in a panic situation in this district regarding the shortfall of money we have,” Guthmiller said during his presentation. “But the reality is that we have to make $1.2 million of reductions.”

He went on to say that there has to be a reduction of staff no matter how hard the board and the community tries to keep staff where they are now. “I would remind you that 82% of our budget is personnel, so you can take the other 18% of our budget and whack it all you want, but you’re not going to get the results that we need in terms of looking at the reduction that need to be made,” Guthmiller said. “I think that’s important to understand, is that our biggest area is involved in personnel, and that’s what this organization is about.”

The evaluation criteria for budget reductions that Guthmiller wanted the board to look at was presented to the members and to the people attending the meeting. This prioritized criteria included mandates and agreements to the state, student safety, the impact of core and instructional programs, student learning and achievements, number of students that will be affected, non-core and co-curricular instructional programs, extra-curricular activities, effective management and finally, the impact it will have on the district facilities.

“Everyone can prioritize these things in their own manner,” Guthmiller said at the meeting. “But this is what administration has done and we believe it fits our mission and our beliefs that we have in this district.”

Guthmiller then informed the board of the strategies used to come up with the budget cut draft list. These included moving a staff salary to a different budget, a reduction in operations, departments, and administration, early retirement savings, not replacing staff that has resigned, transfers and shared staff between buildings, additional periods and reduction in force.

“We think if we can utilize these other strategies, we can evade that last one,” Guthmiller said during his presentation. “And we’re going to do all we can to make sure that happens.”

The final budget cuts will be decided at a school board meeting on March 31. “I want to end with saying this is a list only, and there can be anything on this list that can come or go,” Guthmiller said at the meeting. “This is presented in our best efforts based upon the planning that we’ve done, and I’ve received a lot of feedback from it, and we’re all listening.”