“Can I Have Your Attention Please?” 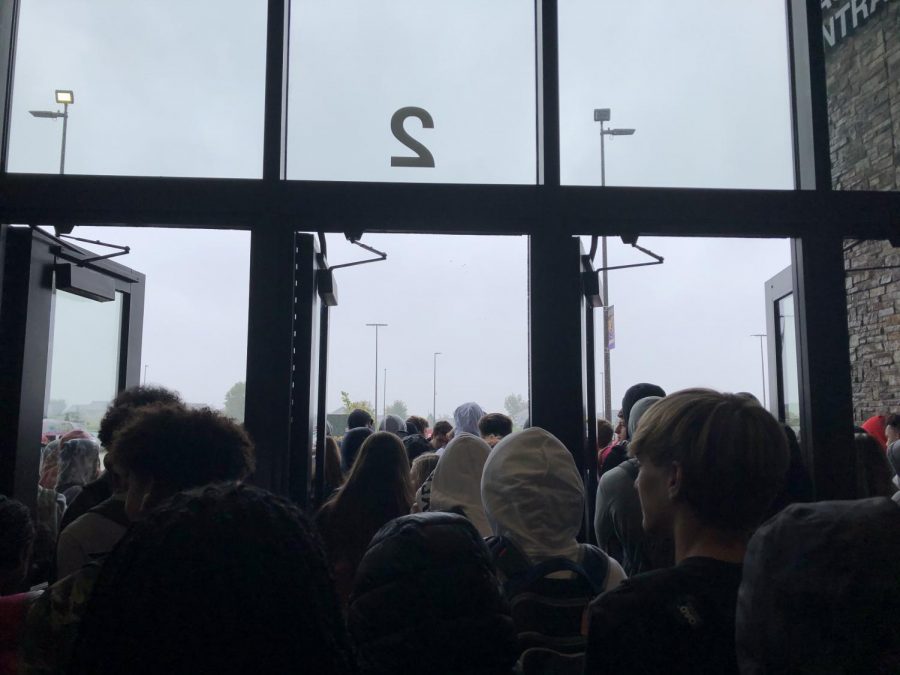 Many students exciting the building via Activity Entrance (door 2) into a lightning storm.

On Thursday Oct. 10,  the fire alarms started to sound. Unfortunately a lighting storm and pouring rain created a complicated situation outside. Many students and staff did not know what to do. The lunch room was filled with confused students in C lunch, who were hesitant to leave the lunchroom. Just before the fire alarm, many students witnessed a bolt of lightning light up the sky, followed closely with a loud crack of thunder. Most students were evacuated and the fire department was dispatched and quickly cleared the building. When they reentered the building, many students were drenched, shaken, and cold due to the whole ordeal. The rest of the day resumed normally.

Many students and staff speculated on the cause of the fire alarm malfunction. Many believed it was caused by a bolt of lightning that struck the highschool. Superintendent Laura Kacer stated in a press conference, “We were told that somehow, some way air bubbles had gotten into the water line system that feeds into the sprinklers. So then, we reach out to the city to ask them, do they know why or the cause.” Kacer also mentioned the fire alarms at Summit Middle school malfunctioned for the same reason at the same time.

The Johnston-Grimes Metropolitan Fire Chief Jim Clark recommended that students and staff go to an open area near the school when the fire alarm goes off. The parking lot or a grassy field are prime locations when students and staff are unable to go into the football stadium. Although the highschool is designed to keep fire from spreading from the initial starting point, Clark still recommends students and staff evacuate and wait for the fire department to clear the building.

When asked, the National Weather Service of Des Moines issued the following statement: “It can be a complicated answer. First and foremost, your administration should be your source for what to do in cases of fire alarms or other possible building evacuations. They will have the best and most up-to-date information with regards to any threat as well as the various safety procedures in place to mitigate harm. In the event that you must evacuate the building during a thunderstorm (severe or not), you will also want to look for direction from your administration to ensure procedures in place are followed and staff and students are properly accounted for.”

They also went on to state, “General outdoor safety during thunderstorms and lightning includes finding indoor shelter, but assuming that cannot be obtained reasonably, attempt to reduce the risk of being struck by lightning by avoiding wide open fields (where you become one of the tallest objects), staying off of elevated areas (such as the top of a hill), moving away from tall items (like trees), and crouching down (but do not lie down). When in large groups, it is also recommended to spread out to reduce injuries from lightning passing form person to person, should a strike occur.”

More information by the National Oceanic and Atmospheric Administration about lighting and thunder safety can be found at https://www.weather.gov/safety/lightning-safety