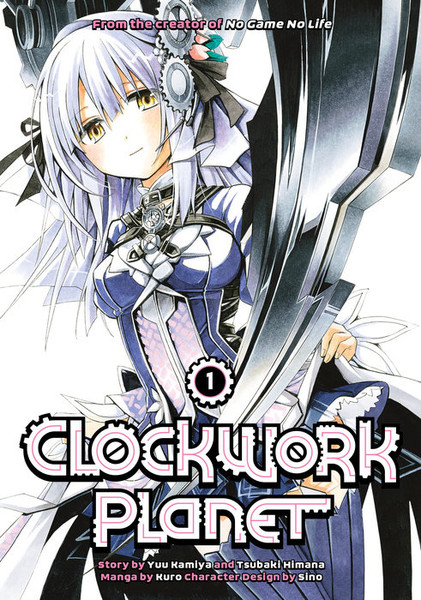 Clockwork Planet is a manga about mechanics and terrorism. I have to say it’s one of the better manga of this topic since the way that they blend the genera of mecha (robots), action and comedy fits their story and the purpose of the terrorist group.

Manga is a comic book from Japan. It is a growing industry of over $5.5 billion in Japan and has spread their influence onto multiple different continents. Manga is traditionally read right to left, even with translated copies that are sold in America.

This manga starts on a dead planet covered entirely by gears that spin to keep life, and they give very little information on how exactly this works. The main character, Naoto Miura, can hear any and all electronic functions. Miura is an oblivious boy who is bullied due to his obsession with machinery. He thinks only of the sound that is produced by each piece of technology while ignoring his bullies as they try their hardest to catch his attention. This is a fairly unique idea, though the main character role follows the overused style of an impressive character with little to no ability for school. Even though it follows a stereotype, I still really enjoyed his personality and how unmindful he is to bullying.

Miura’s life is changed in more ways than one when a shipping crate falls out of the sky and crushes his house. Inside of the crate rests a broken mechanical android in the appearance of a girl. Even as his house is about to collapse, Miura lifts the girl up from the crate, carries her to his workshop, and attempts to fix her. He comments on how beautiful of a sound her mechanics makes, and how one sound was disrupting the symphony. It was the main reason he was urged to fix the girl.

Miura only focuses on repairing the android, ignoring the building collapsing around him. For this entire time, the author, Yuu Kamiya, is only developing Miura’s extreme personality quirks. I find that to be extremely benificial, because my favorite parts of manga tend to be the characters. It helps to show that, while this character isn’t perfect, he definitly does his very best in whatever he puts his mind to. He doesn’t bother worrying about what other people think about his passion or methods.

Everything works out in the end, though, because the android is fixed after three hours of work, and quickly escapes with him before the roof finally collapses. Miura discovers the girl’s name is RyuZU and forms a contract with her. They continue with a fairly normal life of ignoring the teachers and annoying classmates. I love how RyuZU acts, since even though they’ve fallen into a master/follower sort of relationship, they still act as friends. Miura doesn’t command RyuZU to do anything, and even as a android, RyuZU has free thinking and free will in addition to protective instincts.

The author then switches from watching Miura and RyuZU to a tempermental mechanic named Marie Bell Breguet and her mechanized soldier of a body guard, Vainney Halter. The two are working to fix the Japanese city of Kyoto, which exists atop a gear. This gear, however, developed a problem and is planned to go through a purge, or complete destruction of the city. The government has not warned the citizens of the upcoming destruction, and has told Marie to flee the city since no one has managed to fix the problem.

As this is happening, Marie is also looking for RyuZU, hoping the android holds the blueprints that can help to save the city. She happens to pass Miura and RyuZU walking home on their way back from school.

The two groups began working together, creating what they classified as a terrorist group, and save the other cities that the government plan to forsaken. They have protected the civilians under the guise of destroying their livelihoods and forcing their evacuation from the defective cities. The way they did this, of course, was artfully done with Miura acting of a personality different from his own and becoming the face of their terrorist group.

Miura’s group traveled to multiple failing cities, sometimes being called their through secret challels and sometimes using information that they have found. They prevented the fall of two big cities, and managed to take down parts of the corrupt government using questionable means. As far as terrorism mangas go, this one has reasons seperate from vengence and anger thatseperates it from the others.

The reasons for their chaos are not due to revenge or hate, instead of the duty to help people that don’t realize the danger they’re in. At the same time, the author makes it clear that the government is not necessarily the evil characters in this manga, but are comprised of people trying to save themselves and their families.

All glances that we’ve had of the villain have been kept minimal with little information to go with it. From what I have gathered, the villain has a tendency to live underground in a dead city, and believes Miura to be a genius mechanic from 2000 years before. What he wants to happen with Miura is still unknown, since the manga is still being written.

I can’t wait for this manga to become more popular and gain more chapters, and am sure both will happen. The anime is already being developed this spring, for anyone who would rather watch than read. I personally give this manga a 8.5/10, with the lovable characters and the advancing plot.