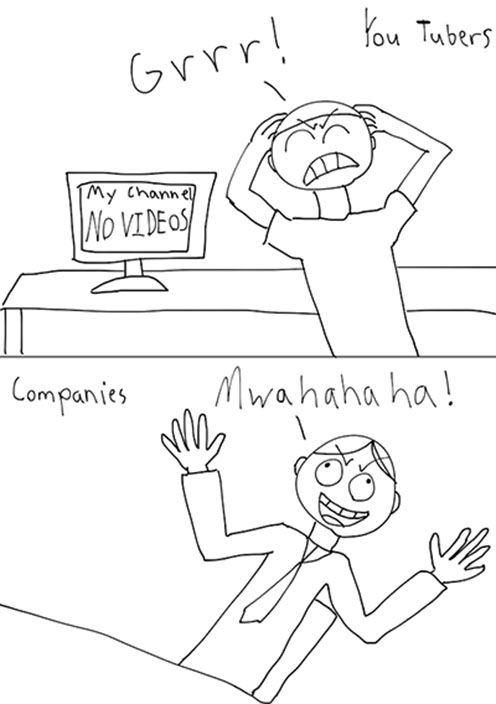 Recently certain companies have been abusing their ability to flag things for copyright, which means the companies can make YouTube take down videos without checking for fair use. Fair use is when a person can legally use someone else’s content without the creator’s permission, as long as they give credit to the original creator. This is really important for people like reviewers, and parody makers. Along with students that are making projects and doing research reports.

“Fair use gets abused a lot,” librarian Ruth Thoreson said. “I think it is different because people download the videos off of youtube.”

Knowing these new circumstances will help students get better at citing sources properly and how to detect copyright themselves. The website creativecommons.org says that giving credit to the original source when it comes to pictures of artwork, is considered ethical, but does not protect one from copyright. So, taking a picture from google images and citing it is not protected under fair use. Also there is no certain number for how long one can use a song in a video. It can be fair use if the content is used for a different purpose, such as giving information and not advertising, and does not take away any economic importance.

“This is kind of a hard subject for me, because early on most You Tubers didn’t follow copyright laws,” english teacher Jeremy Fitzpatrick said. “So we wouldn’t have this problem in the first place if people followed the rules before. People should just make sure they credit correctly. Though I do think it should only be the representing companies should be able to tag videos.”

Dragon T.V. always has to be careful of what they decide to use in their episodes. Whether it is the music or just references to other media.

“Our music that we are using for Dragon T.V., we pay for the rights to use it,” Dragon T.V. advisor Michael Barta said. “And we have had multiple videos of ours flagged, and emails sent to me about it. Even though the music is paid for and legal.”

There are many things to consider when determining whether a creation falls under fair use or not. Depending on how much of another person’s work you use and which part of the work you use, can determine if the video is making a copyright infringement. Sometimes it depends on what the you tuber, or student is trying to do with the piece of media they use. That is to say, if it is for an educational purpose or just for entertainment.

“In video production and Dragon T.V., we have gotten a lot better about realizing that if we are posting videos with someone else’s song or video that they have taken, we’re stealing,” Barta said. “That is one of the reasons we bought rights to our music.” Dragon T.V. has not had any more videos taken down since they started paying for their music.

There are certain filters on cites like google who will only bring up images that have certain usage rights, if you choose to turn those filters on. Or websites like creativecomments.com can give material that only have their protection.

“We use the sight megatracks.com for our music,” junior Ashley Miller said. As a student on the Dragon T.V. staff, Miller has to think about the copyright when coming up with ideas for episodes.  “I think as long as we have that website we will be able to make good quality videos.”

Taking these precautions helps protect things like dragon t.v. from getting more videos taken down. Though others still have to work harder to protect their work as well as their grades.

“I have taken several classes just on copyright laws, and I still struggle on whether something is fair use or not,” Thoreson said. “I’m struggling right now with getting videos up to helping students with reports. ”

There is also a computer system that goes around detecting copyright infringements. You Tubers like the Nostalgia Critic, have had experiences where this system was most likely responsible for his videos taking down. The website cartoonbrew.com has a whole article on the subject of the computer system, and fair use in general. So, if people want to make a project or paper public online, they will have to be careful of the very sensitive system.

“If it were me, I would say the only person that has the authority to take something down is the person that owns the copyright,” Thoreson said. “To me that seems simplest.”

This could really help lessen the amount of videos being taken down. In fact, just taking some time to do a little research on the topic could make a huge difference. The system will always be abused easily, until YouTube decides to get a better handle on their own rules though there are still people who are trying to fix things. Specifically, the YouTubers who are getting their videos taken down are speaking out. They are posting videos with their experience with the copyright laws, and how many videos of theirs have been removed from there channels. Most of these videos titled “Where’s the fair use?”. Hopefully spreading the word will make people do some research on the copyright laws. Checking out these videos would be a good idea if one would like to know more.