The Black & White • May 10, 2022 • https://jhsblackandwhite.com/des-moines-protestors-gather-after-roe-v-wade-threat/ 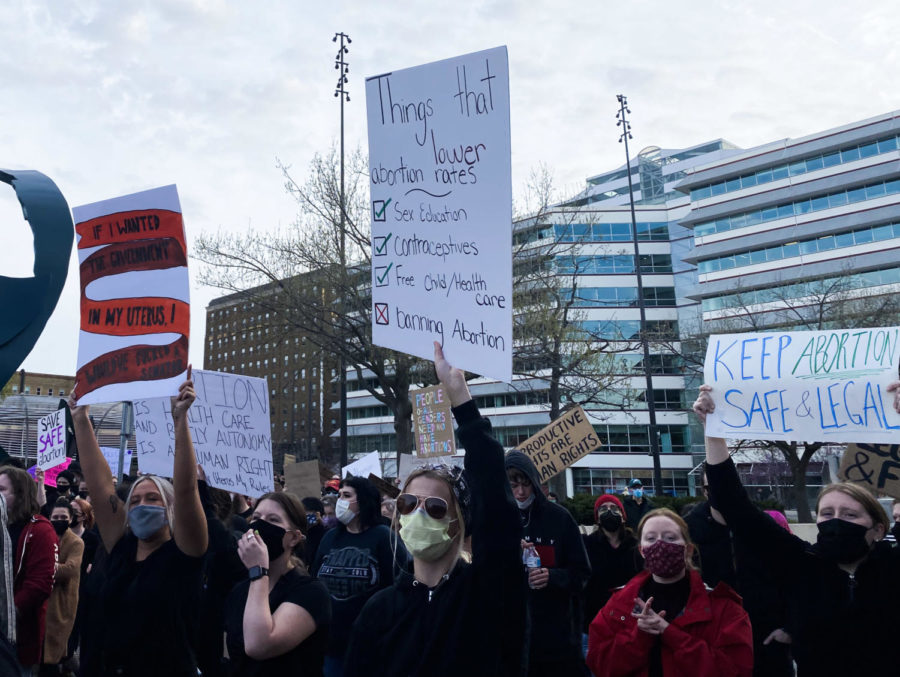 Advocators of Roe v. Wade abortion access ruling stand in solidarity at Des Moines protest May 4. “Without safe access, abortions will continue happening and people will die,” one speaker said to the crowd.

On Monday May 2, a Supreme Court case draft repealing Roe v. Wade was leaked by the political based newspaper Politico, stirring controversy across the country.

Two days after the news, hundreds took to the streets of downtown Des Moines in protest of the leaked case. Protestors crowded at the arrival location, Cowles Commons, then marched to the new federal courthouse under construction.

Ruled (7-2) in 1973, Roe v. Wade is the landmark decision of a person’s right to choose to have an abortion without excessive restrictions. Simply put, it is unconstitutional for state law to ban abortion and in many circumstances abortion is legal under this protection within the 14th amendment.

Additional liberties the 14th amendment protects under other court cases include the right to contraceptives (1965), interracial marriage (1967), and gay marriage (2015.) As a result, the question is raised of what more will be on the Supreme Court’s agenda, particularly if the drafted repeal holds in the final vote.

The march to the court house was slow paced with strong turnout. An atmosphere of emotion and solidarity accompanied the variety of chanting, drumming, and clapping. “Hey hey, ho ho, abortion bans have got to go.” the crowd sang.

At each intersection between Cowles Commons and the courthouse, protestors stood along the perimeter of the square as they listened to volunteer speakers sharing their stories through a megaphone. Women, men, trans and nonbinary people, older generations, teachers, dogs and children were just some of the groups represented.

While some chants were more confrontational towards the church, state, and police, organizers reminded the crowd that “We’re here in solidarity, right?” The crowd clapped and cheered in agreement.

As we wait for the final decision to play out within the next two months, undoubtedly the process will be met with more upset, protests and uproar. As for the crowd gathered on May 4th: