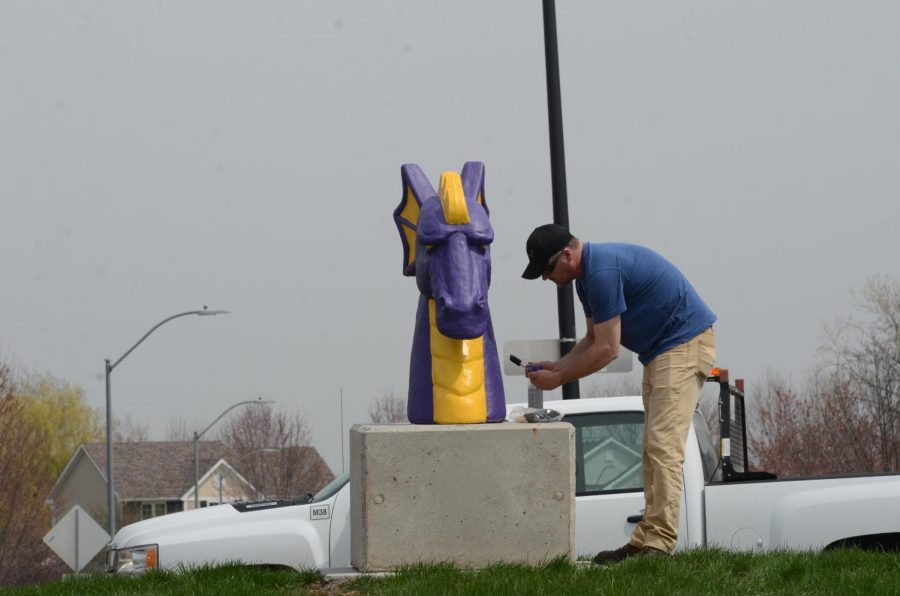 Two dragon heads were installed Tuesday on a roundabout and in front of the football stadium.

Parul Srivastava ‘19 was head of the dragon head committee for student council, and was in charge of sorting out what to do with the heads since last year when the committee was formed by the administration. “We were responsible for figuring out what to do and where to put the dragon heads and who would paint them,” Srivastava said. “But by the very end of the year it was kind of tabled because of summer and most of the people on the committee were seniors.”

The committee was restarted in this February, but the stakes were higher. “It was urgent because the people who had the dragon heads didn’t want to keep them anymore,” Srivastava said. “This puts a big burden on us because the dragon heads each weigh a ton and they are each about six feet. And they have to be painted in sixty degrees exactly the entire time you are paint them and the entire time they are drying, which is a long time because they are freaking huge.”

The committee was tasked with finding space to put the massive dragon heads, but finding strorage space for four tons of solid concrete was not as easy as anticipated. “We were looking at the school, the woodworking place, the locker rooms and stuff… It was all just so unrealistic because there was no place we could keep them for that long and we couldn’t find any student painters.”

A big setback for the committee was finding painters willing to paint the statues. “The administration told us they had reached out to all the elementary, middle school, and high school art teachers and none of them wanted to take it on,” Srivastava said. “That was frustrating because we didn’t even have clubs supporting us, so we just had to find individual people.”

After the logistical nightmares and immense frustration, the dragon head committee was at its wits end. Then came the student council meeting with superintendent Laura Kacer, when she revealed the administration had completley forgotton about the dragon head committee and they had already started to install the dragon heads. “They (the administration) had already put the base on the roundabouts,” Srivastava said. “They were ready to just paint it random colors and just put it on. This was six weeks after giving us this assignment and they had completly forgotton about it…I was really frustrated and I think that came out in the meeting.”

Luckily, a compromise was reached and it was decided the administration would take care of the logistics while the student council could pick the designs that would be painted on the dragons. “They got to handle all the hard stuff,” Srivastava said.

The dragon heads were finally installed this week on the two roundabouts, in front of the football stadium, and in front of the main doors of the school. However, the student council was not consulted by the administration as promised before installation, and the heads were not painted in the designs the council decided upon.