Dragons triumph over Jayhawks for a cause 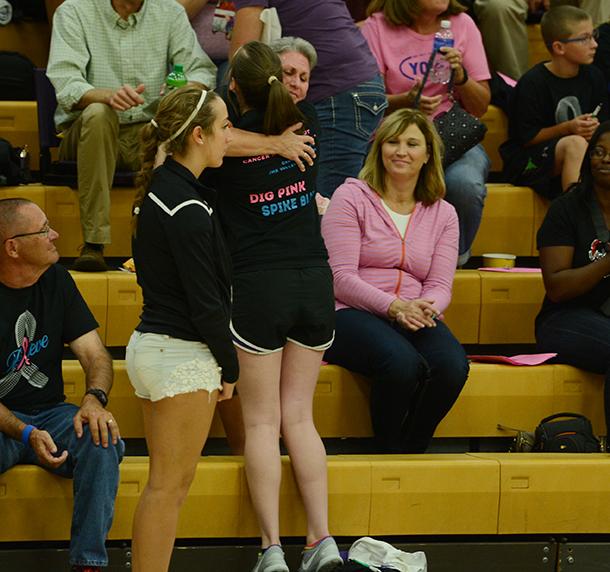 Junior Anna Miller hugs and hands a carnation to one of the standing cancer survivors in the crowd. The girls' varsity volleyball game took down the Urbandale Jayhawks during the Digpink/ Spikeblue game Sept. 29.

The Varsity volleyball team defeated Urbandale 3-1 at their biggest fundraising event and match of the season Dig Pink, Spike Blue Sept. 29. After winning the first two games and losing the third, the Dragons came back to win the match with a 25-18 fourth and final game score.

The Dig Pink, Spike Blue game was also senior night for the Dragons. Posters were displayed in the gym foyer with pictures of all the seniors, and they were introduced along with their parents in front of the crowd. “It was a lot of fun, especially because it was also our senior night,” Miller said. “It was really cool to know that all of the people that came out to watch were helping to raise money for a really good cause.”

Dig Pink, Spike Blue is a fundraising event that raises money and awareness for breast cancer and colon cancer. This is the eighth annual Dig Pink event held by Johnston and currently the longest running Dig Pink event in Iowa. At the game there was a raffle, bake sale sponsored by NHS and t-shirt sales all to raise money for breast and colon cancer. A reserved parking spot in the front row right next to the commons doors is also up for auction, with all proceeds going directly to Dig Pink, Spike Blue.

The volleyball team plays next Oct. 6 away at West Des Moines Valley, with JV at 6 and Varsity at 7:30.