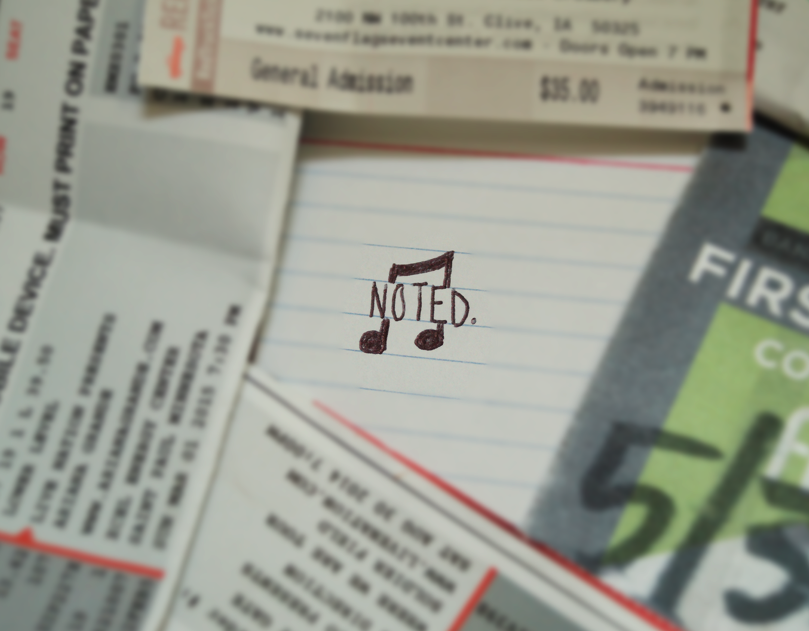 My first reaction to Ed Sheeran coming back to Des Moines was- must buy tickets. It’s not every day a more well known musician waltzes into Des Moines willingly to perform for our corn growing population, so I choose to pick up the opportunity with a smile. Soon after the thrill of purchasing tickets soon died off, I began to be skeptical of the Wells Fargo venue. Personally I am a smaller venue kind of person and knowing of Ed Sheeran’s vocal style, it seemed more fitting to go the smaller setting route. But at the end of the day I was going to see Ed Sheeran.

When I first arrived downtown near Wells Fargo June 9, let’s just say I wasn’t too happy with the parking situation nor the unorganized flow of traffic of fans also trying to find a place to settle. Eventually a spot was found and excitement grew the closer we got to our seats for the show.

After opening act Rixton made their entrance onto the stage, it looked obvious to me that everyone was there for Ed Sheeran. The crowd that I saw wasn’t too interested in the pop band of four until they started involving the crowd in various call and repeats along with lead singer Jake Roche’s attempts to be humorous. Since I have had the opportunity to see the band twice, I noticed they do deliver a lot of energy for the crowd to get them pumped up for the headliner, much like a tailgate. However they aren’t always my favorite vocal group, it could be because of my taste in music but sometimes they just don’t reach that level of amazement you receive from performers. Now don’t get me wrong, Roche has strong vocals but I felt he fell through a bit, making bassist and keys player Danny Wilkin the backbone to their singing. Since their debut album was released March 3 of this year, you would think they would have played a song or two off it, but sadly they stuck to their 2014 EP Me and My Broken Heart which was slightly disappointing. Overall they were a pretty entertaining bunch to watch, especially Roche’s dance moves and I was impressed with their musicianship even though the drums sometimes overpowered everything else.

For me it was interesting to see what Ed Sheeran’s stage set up would be, since he would be doing a one-man show. By the time he was ready to go on a lone microphone and stand along with trapezoid shaped boxes were the only items to make up his platform.

A thundering roar welcomed the musician on stage, which didn’t surprise me, but what did was Sheeran’s ability to fill up the large arena with his voice and acoustic guitar. Once completing his first set, my mind was dead set on him having a pre-recorded track but eventually Sheeran explained the looping system in place that recorded selected phrases or sounds during the production, which then could be controlled by his foot. This brought me out of my dampened mood back up to par and the rest of the show I was impressed with not only how talented of a voice he had but the amount of guitars Sheeran owned. I counted throughout the show how many guitar changes there were, the total coming to eight. I’m not sure if there were only two guitars and the man shipping them back and forth was tuning them all to the correct key or if there were just that many guitars tuned to them already, either way it was an astonishing amount. My favorite song of the night had to be “You Need Me, I Don’t Need You” just because of the amount of power and energy Sheeran brought to the whole stadium. Normally at the other stadium concerts I’ve had the chance to go to, you don’t really feel the artist’s connection with the audience making you as a listener not truly have that concert experience. However with Sheeran you could very much feel the connection and energy in the air giving the crowd a concert to remember. My only other criticism besides the venue would have to be the backdrops, the visuals displayed were actually really neat to watch due to the notable artistic work put into them, but distracted me as a viewer from Sheeran himself. Overall I felt as though Ed Sheeran held an amazing performance and I would definitely spend the money to see him again, but maybe at a different venue.