The backstory and progression of the food bins. 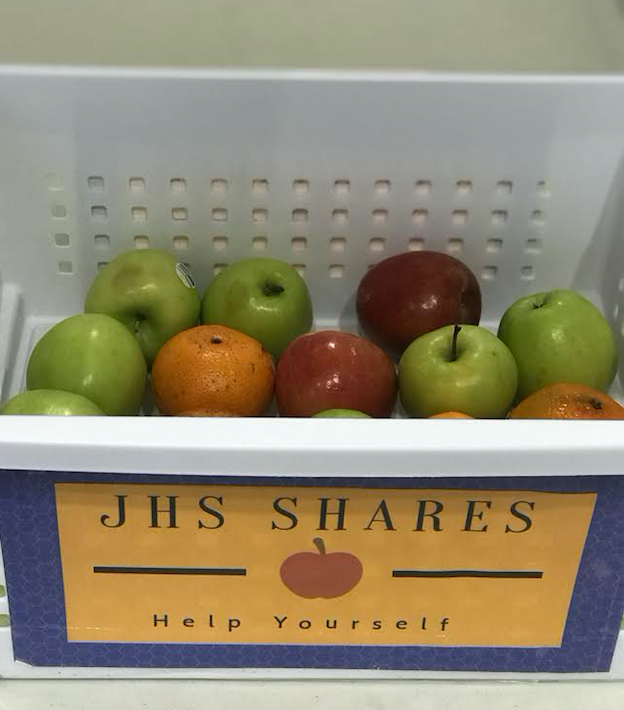 Sitting in class, Hannah Fageroos ’20 could not help but begin to feel hungry. As her hunger began to grow, Fageroos remembered one of her friends mentioning the food bins in the counselors’ office and decided to go there for a quick snack. As she walked into the office, she immediately noticed the white bins on the counter and headed over to pick something out. Although, when Fageroos looked into the bins, all she saw was rotting fruit. Not thinking her hunger was worth eating rotten fruit, she headed back to class with disappointment and a still growling stomach.

The food bins are one or two white bins placed by the trash in the cafeteria during lunch, so students can place any leftover food in there instead of wasting it. The leftover food, mainly fruit, is then placed at the counter of the counselors’ office for any students who may get hungry throughout the school day.

The bins were first introduced to the school by AP Environmental Science teacher Kyla Burns due to research her students did on the food waste of the cafeteria trash. “We discovered that the trash cans in the cafeteria were full of whole fruits,” Burns said. “I started investigating and found it was connected to the policy that students must take a fruit serving in a lunch in order to qualify as a full lunch. We can’t change that policy since it’s at the federal level, so we decided to find another way to prevent the food from getting in the trash.”

Since the start of the food bins, students have been half and half on their opinions of the bins. “Well people mostly put fruit in it and stuff, and I’m not just going to go and eat fruit that someone else has touched,” Maddie Herrin ‘20 said.

As Fageroos also recounts of her personal experience with the food bins, she is clear to point out that all she saw in the bins were “really old, rotting fruit that didn’t look tasty at all”.

Additionally, while Herrin thinks the whole idea of it is a good and interesting one, she just does not think it is well executed, considering all of the unappealing fruit.

This may be the case with many students, but other students do not seem to find any problems with the bins. “We get a full bin of fruit almost every day from the process, and most of that gets redistributed every day,” Burns said. “I am really happy that students are using the process. I was fearful that no one would take the fruits once they were placed in the bins, and we would be overwhelmed with fruit; but so far students have been eating it up.”

There is no actual data to how much food is being saved, but Burns plans on having her AP students do a follow-up project on the waste to see if, with the food sharing program in place, there is a dramatic change of fruits in the trash.