Pleasing fans one quarter mile at a time 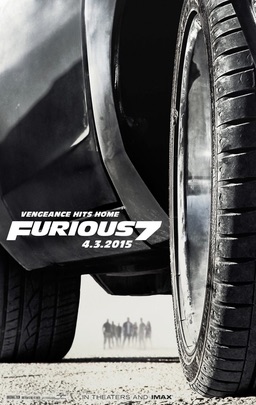 “Furious 7” is a movie that I can’t persuade anyone to really see, you either understand the formula and enjoy what it offers or can’t let the series many flaws fade from memory. If you need a review to tell you whether “Furious 7” is the movie for you, then it obviously isn’t and sadly probably won’t sway your opinion in much of any way. However, for those who have enjoyed the franchise for nearly 15 years, I can happily report that “Furious 7” does indeed take some minor, but much needed, risks and because of this succeeds on it’s own merits. Thought provoking material this is not, but if you allow the senseless nature of everything to sweep you up, I can promise a great ride that never lets go of it’s hold on your attention.

What distinguishes this installment from the rest is the recognition of what makes these movies entertainment spectacles. There’s actual racing in some scenes, something that has been missing since the early 2000’s, and the plentiful locales (ranging from Europe to the middle east) harken back to “Tokyo Drift” and even “Fast 5”. In many ways, it feels more like a conclusion than a true sequel, whether that be because of the passing of the late Paul Walker or due to director James Wan’s self awareness of the franchise’s fatigue. It’s back to basics for the crew figuratively and literally, as they gather for the one “final job” and to pay homage to everything that has come before hand.

At the center of “Furious 7” is Deckard Shaw (Jason Statham), an assassin who seeks revenge against Dominic Toretto’s grease monkeys for the death of his brother in “Fast 6”. After taking out a few key members, Toretto teams up with a shady government agency led by “Mr.Nobody” (Kurt Russell) to find Shaw and bring him to justice. Unable to keep tabs on Shaw and his team member Jakande (Djimon Hounsou), Dom plans to steal a top secret piece of technology called “the gods eye” which allows it user to track anyone in the world at any moment, which he plans to use to find and kill Shaw . From here it becomes a game of cat and mouse as both men battle for the eye leading them to a familiar location for one final showdown.

Statham himself, as an actor, is fantastic. Able to pull off amazing stunts while making everything look as effortless as possible. He’s no exception here, as some wonderful hand to hand combat sections really show off Shaw’s ruthlessness and physicality. The issue is that he’s sadly underused when compared to other less interesting characters. His scenes involve making his presence clear and then immediately leaving, this in and out nature leaves very little time for Shaw to be developed and feels like a second rate villain. Thankfully the rest of the crew are given more to do with Vin Diesel, Paul Walker, Ludacris, and Michelle Rodriguez all looking like they are having a blast on set, with The Rock really showing why F&F is such an over the top series.

The “family nature” of the actors and actresses can definitely be felt which makes a particular scene near the end even more emotional tugging (a tribute to Walker). However, I could have done with less emphasis on Letty and Dom’s reunion. It isn’t so much that the two lack chemistry, they’ve been together for many movies now, but more so that the script allows for Rodriguez to do little more than whine. Her predicament is a hard one to recover from (memory loss from the previous movies) but that doesn’t excuse the constant mentioning of love and lost memories, in the end it’s cheesy and drags the brisk pace down a few notches. With “Furious 7” being over two hours long, these little sections add up to little more than padding, most of which could easily have been cut.

The reason most viewers went is most likely because of the action, and I have to say it’s probably the best the series has ever been. When I mentioned that Furious feels more like a conclusion, this transfers over to the many action sequences. It does a fine job of keeping smaller/enclosed firefights and fist fights scattered throughout to not only feel like an older F&F movie but make the even bigger sets seem insane, and to this extent they succeeded.  There’s some real standout sequences here, including a skyscraper hopping car chase, a battle in a parking garage, and even a cliff side base jump, in cars. James Wan really knows how to film high adrenaline chases and fights (surprising given his almost exclusively horror filmography), making for some of the most fun in the series so far.

This does lead to a few problems, primarily with the pace which seems to always be a pedal to the floor instead of a nice and easy incline. For many viewers this won’t be an issue but I felt as though I needed more than a 5 minute break before the crew hopped on a plane to the next location, and yes, Furious does attempt these with some humorous interactions between actors but even that feels old after some time. Logic is also thrown out the window almost too many times to count (why escape from a falling bus through the open top door when climbing from underneath is way more dangerous) again though, if this sounds like it would be a hindrance to your enjoyment of “Furious 7” I’ll save you the trouble and say don’t go.

“Furious 7” knows what it wants to be and doesn’t stray too far the series conventions that make it a billion dollar franchise. However, that’s not too bad, if it ain’t broke don’t fix it, and Furious takes enough effort to try to create a new experience for fans that it doesn’t feel like a simple rehash if F&F6. Dom’s crew remain as enduring as ever, the action never ceases to amaze, and the subtle nods the series past are notable and welcome. It’s weak villain and questionable progression though does make it difficult to recommend to anyone who hasn’t enjoyed one of the previous films but in comparison to the series as a whole Furious stands well above the rest. So remember, there’s nothing wrong with enjoys the Birdman’s of the film industry, there’s also nothing wrong with shutting off your brain for two hours of pure adrenaline filled entertainment.