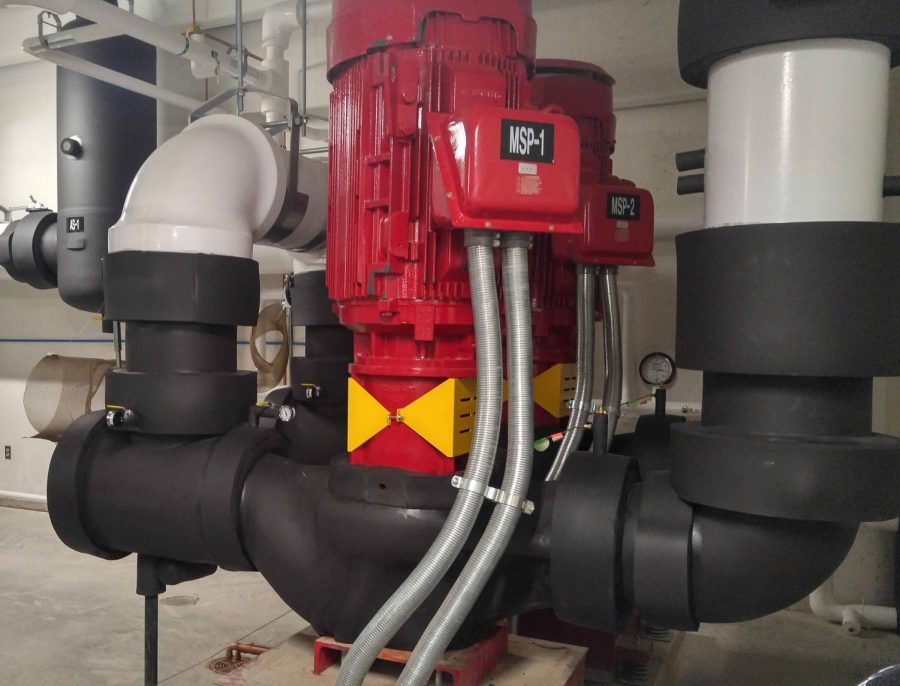 These are motors with 2000 horsepower that forces water through the pipes and around the building. Only one is working at each time, while the second is used as a backup.

The high school is an eco-friendly invention that has temperature-controlled rooms that are expected to be at the perfect temperatures at all times. Because of this, if a window is open, it messes up the entire system. Teachers were made aware of this new rule in an email from the buildings and grounds staff after at least one window was discovered open.

In the old high school building, teachers would bypass talking with the custodians, who control the temperature, and would open a window to cool or heat the room. Spanish teacher Kari Gray has struggled with her room temperature since the beginning of school. “[During eighth period] it gets disgustingly hot in here, and it is my biggest class,” Gray said. “It’s really sad to look out at my students and them sweating down their faces.”

Gray makes sure at least portable two fans are running constantly throughout the day to help with heat. This was a practice she started before learning the windows were not allowed to be opened because  even with the freezing temperature outside, the room would continue to stay too warm. “Sometimes when I’m up teaching and walking around, a kid goes and opens the window,” Gray said. “I don’t notice until I feel like it’s kind of cool [in the room], then I have to go shut it.”

Fiona Andersen ’18 is a student in Gray’s eighth period. “In the summer [students were] complaining it was too hot.” The most temperature change Andersen experiences is in the art rooms. During Andersen’s drawing class, temperatures can reach 61.6° or lower. “Some people will open the doors,” Andersen said. The outside halls are warmer than the rooms, reaching 62.0°. Some students bring blankets to class to keep warm, in addition to sweatshirts. Andersen said that the floor is the coldest part of the room.

Someone took pictures of the open classroom windows and that prompted the email. “As soon as I read it I was pretty angry that someone had taken pictures and [that they] came out angry,” Gray said. “The email sounded reactive rather than proactive.” Gray wished there was an explanation of why open windows were a bad thing. There had been no previous warnings from the school about this fact. “On that particular day, I literally had a fan in front of the window it was so hot.”

Buildings and grounds director George Smith is in charge of the new system. This is an entirely new system to Smith, and he is still learning the technical differences from the old school’s old system.

The school is heated using plastic tubing inside of the concrete floors. The tubes carry heated water, thus heating the floor. The heat then rises from the floor and fills the room. Large vents in the room are meant to circulate air and keep the rooms cool. There are sensors in each room that are hidden behind small metal plates to protect them from damage.

The tubing is checked monthly to verify that water is still clean, and to prevent any problems that might build up in the tubes. The janitors are not allowed to change anything within the system, instead experienced companies are called in to fix problems that may occur.

All of the rooms are at pre-set temperatures depending on if they are occupied or unoccupied. “With geothermal systems, we run the occupied and unoccupied temperatures closer together than we run [them] on the older systems,” Smith said.

Occupied rooms are designated to be between the temperatures of 68 and 75 degrees, while unoccupied rooms are set between 55 and 65 degrees. It is easier for older systems to change temperatures drastically than it is for the geothermal system because the air is directly heated and does not have to be conducted using concrete. “The rooms at JHS can heat or cool without the noise we are used to over the past years,” Smith said. “It is a silent system.”

Underneath school grounds, there are wells where the system draws water from.  The east parking lot has 350 wells, and there are another 350 wells on the south side of the building. “These geothermal wells are connected into a closed loop and circulated through the system to help with the heating and air-condition of the building,” Smith said.

Smith asked for everyone’s patience as he learns about the new system and the new school. “Each time we open a new or renovated building they give us an owners training on the system used to heat or cool that building.”

He insists that every new building has flaws that are to be fixed or improved, and said the heating is one that will be improved with time.