The Black & White • May 26, 2017 • https://jhsblackandwhite.com/grocery-store-chicken-nugget-taste-test/ 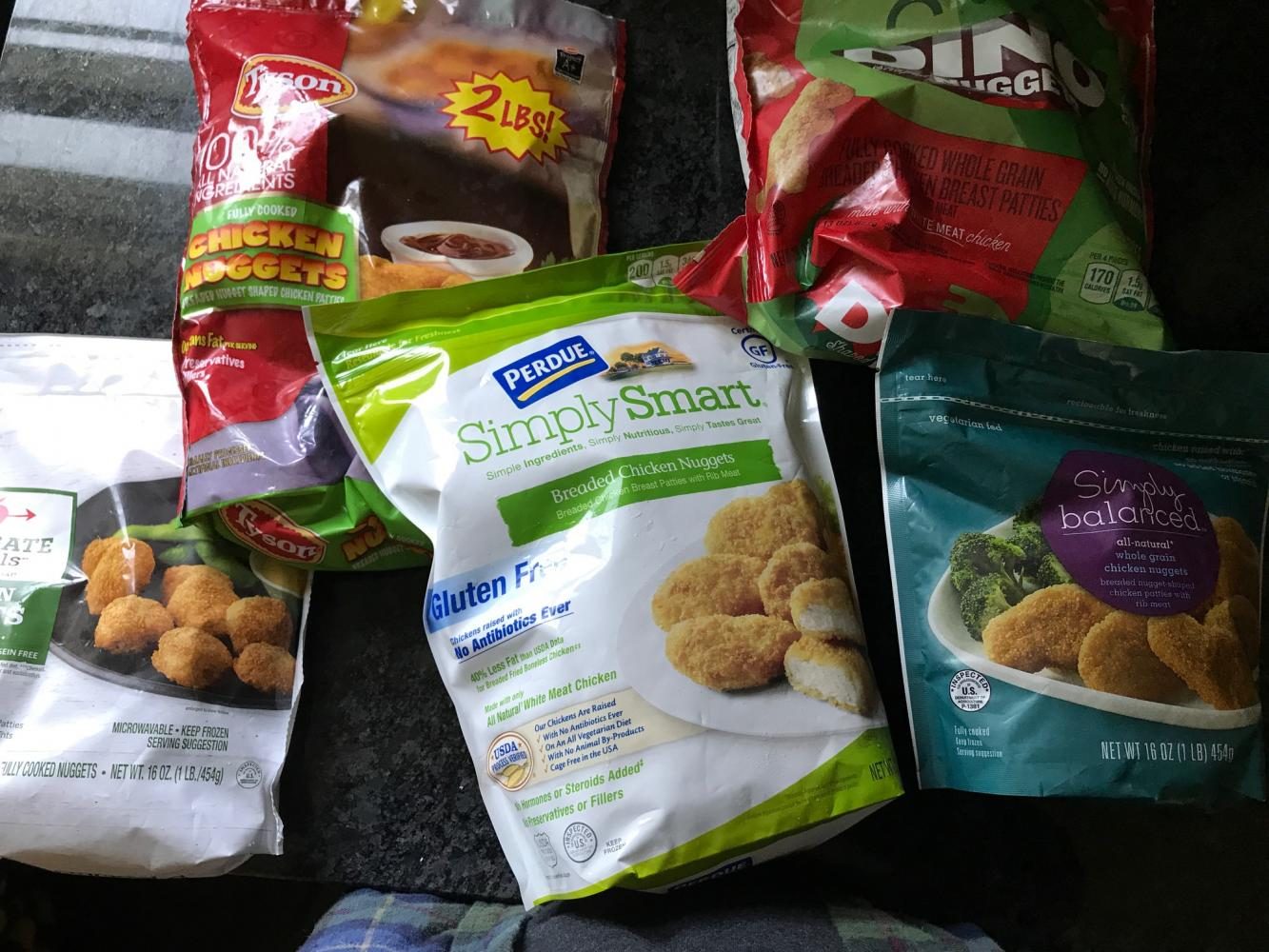 Americans consume more chicken than anyone else in the world at over 90 pounds per capita, according to the National Chicken Council. One of the most popular ways to enjoy chicken is through the form of nuggets. Unfortunately, running out and buying a pack of chicken nuggets from any fast food establishment isn’t always the most convenient or accessible option. The next best thing is stopping at the nearest grocery store and picking up a whole bag of nuggets, but with so many different brands and options, it becomes extremely challenging to find the absolute best frozen chicken nuggets.

A few friends and I judged five popular brands of chicken nuggets that can be bought at Target. We analyzed each nugget based on the inner and outer texture, overall flavor, appearance, crispness, juiciness, and sauce compatibility. The first chicken nugget we tried was the Purdue Gluten Free Chicken Nuggets. None of us have a gluten allergy, but we had never tried gluten free chicken nuggets so we wanted to see what we have been potentially missing out on. However, our first impression wasn’t a good one. The nugget in its frozen state was very pale and unattractive, so we were hoping that after spending some time in the oven it would look a little more appealing. Unfortunately, it still looked sad and pale, just a little bit greasier. Luckily, the first bite completely changed our opinions. The chicken nuggets were pleasantly crispy and juicy, and the chicken didn’t taste overly artificial. It was a little bland at first, but it started to grow on us after realizing how strong of a sauce compatibility the nugget had. The only downside of the nugget was the breading, which not only had an unattractive appearance, but also had the tendency to stick behind my teeth and on the top of my mouth. The final score for the Purdue Gluten Free Chicken Nugget was 4/5 stars.

The second nugget we judged was the Applegate Chicken Nugget. We had high hopes for this chicken nugget because the packaging made the them look amazing, but it was a major disappointment. They were so spherical and had a very manufactured-look, and the meat was gray and crumbly. It had absolutely no sauce compatibility and honestly the sauce made it taste worse. We had to give it a .5 pity point for its somewhat crispy breading, but we would not recommend this nugget. One of my friends describe this nugget as, “the only place this nugget belongs is in the bottom of the trash.” Our final score for the Applegate Chicken Nugget was .5/5 stars.

The next chicken nugget we tried was a Target speciality brand, which were the Simply Balanced Chicken Nuggets. These nuggets had a much better color and flavor, and the initial bite was pretty good. Then the nuggets took a turn for the worse. The after taste was horrible and tasted like chemicals, and the meat was very compressed and dry. This nugget was very mediocre, and the only points it received came from its appearance. The final score for the Simply Balanced Chicken Nuggets was 2/5 stars.

The second to last chicken nugget we judged were the famous Tyson Chicken Nuggets. We had all grown up eating Tyson chicken nuggets, but we hadn’t eaten them for a long time so our hopes were pretty high.  The outside appearance of the nugget was very pretty, and the breading was perfectly crispy. However, there was a very poor breading to chicken ratio, and the inside of the nugget looked horrendous. The nugget was just slightly too juicy and was more greasier than the rest, but we were actually impressed after trying some pretty bad nuggets. We had to remember that grocery store chicken nuggets weren’t going to even slightly resemble real chicken, so we accepted this nugget for its flavor and crispy breading.  The final score for the Tyson Chicken Nuggets was 3.5/5 stars.

The final chicken nugget we had to try was the Market Pantry Dinosaur Chicken Nuggets. We already had 4 bags of chicken nuggets, but we couldn’t have done our taste test without a dinosaur nugget. Obviously the appearance was pleasant and adorable, and the flavor was really good as well. The meat was a little spongey, but it was still juicy and flavorful. The sauce compatibility wasn’t great, but the overall nugget was alright. The final score for the Market Pantry Dinosaur Chicken Nuggets was 2.5/5 stars.