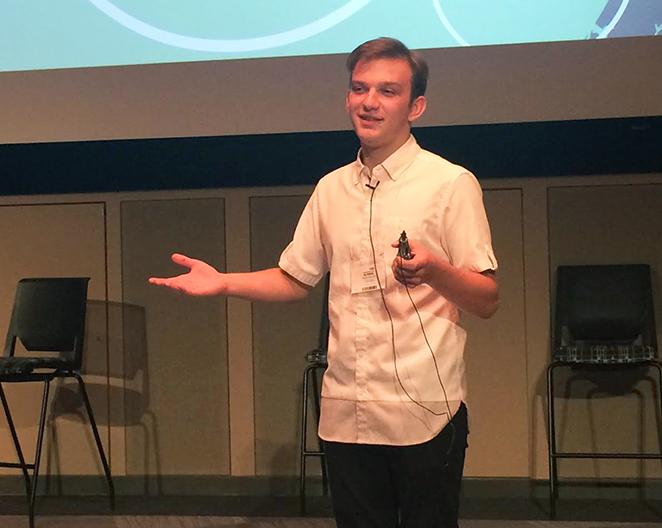 Junior Bryce Schulte speaks about his bullying experiences during the Pioneer event. Members of GSA were invited to the anti-bullying conference that was hosted on Oct. 2 at Pioneer.

A few members of the Gay Straight Alliance club (GSA) attended an anti-bullying conference at Pioneer on Oct. 2. The conference, also attended by Pioneer employees, shed light on a difficult topic to discuss. GSA president Bryce Schulte also spoke to the crowd of around 100 employees and seven GSA members.

The students listened to speaker Jennifer Farley discuss a wide range of topics surrounding bullying, including the impact of bullying on students and Iowa’s bullying and anti-harassment policies.

“I liked what (Jennifer Farley) had to talk about,” junior GSA member Savannah Degroot said, “I thought it was a really good thing to get the community involved and make people aware of school bullying, more than just teachers and students.”

GSA was invited to the event after Pioneer began to push to establish good relationships with businesses and institutions on 62nd Ave.  “Since the Employee Resource Group hosting the event was the LGBTA Resource Group, they started by reaching out to Johnson’s GSA,” Counselor and GSA sponsor Stephanie Guthrie said.

Pioneer hosted the conference to help put more emphasis on the company’s four core values: safety and health, environmental stewardship, highest ethical behavior and respect for people. “We feel strongly that businesses and communities are at their best when diversity and inclusion is encouraged, supported, and celebrated,” conference leader Mike Kunzler said.