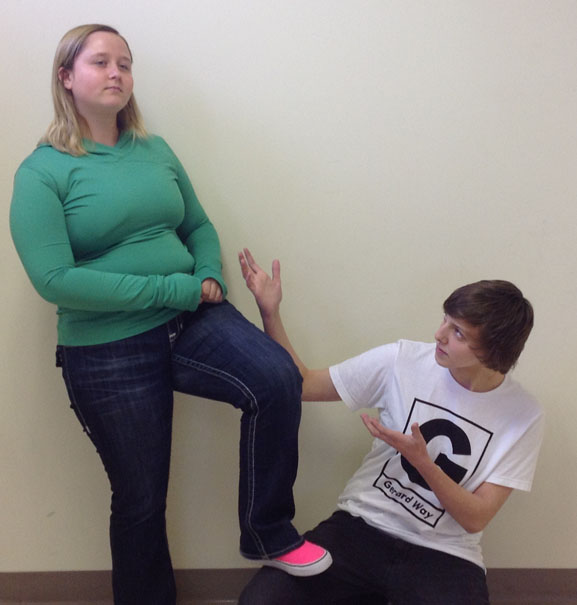 Student representative Taylor Hall poses as her self-proclaimed "sidekick", Natalie Larimer, presents her. Hall has been going to school board meetings and reporting back to Larimer about the topics discussed.

Larimer never thought that she would hold this position. “Mr. (Patrick) Hennes brought it up in government and I’m like, ‘eh why not?'” she said. “I never thought I would be a student rep, but I thought if no one else would, I would step up,” Larimer said.

In the end, both Hall and Larimer were both finalists to become the student representative. Hall was chosen in the end to be the student rep.”I really think she deserves this,” Larimer said.

With Hall as the student representative, Larimer was made Hall’s assistant. “I’m like her side kick, and then I run the Student Representative twitter that we have not started yet, and then I work for the newspaper to help communicate with students,” Larimer said.

The whole reason to have two people was to have more students represented, which was also reflected in Riessen’s answer. “The desire to have to people working together is getting more input from more people.” he said. He also seemed to agree that this is would be of great benefit to the student body, in terms that more people will be representative “Its kind of like getting like a two for one in the deal, they both have things to offer in the position” Reisen said.

Since Hall and Larimer being appointed, there have been multiple board meetings with Hall in attendance. However, according to Hall, there has been little that has been discussed that regards the high school student body. “There is not a lot that has directly related to the high school,” Hall said. “So I have not been super involved in asking questions.”

Larimer had a similar answer. “Taylor is going to the meetings, but she is not getting much info that relates to the high school,” Larimer said.

Hall has had some experience with stuff like this in the past. “I have not had any training from the school, but in the past I was on a committee board meeting for my church when we hired our new pastor, and I was the youth rep for that.”

In terms of communication there has been little. According to Reissen both parties have not talked sence the first bord meeting in September. “I have not sat down withe the girls to see how its been going so far,” he said.

Hall is also not sure what to think of it. “There are sometimes I feel like I’m not the best person for this, but no one wanted to do it,” she said.

In the end its hard to tell what will happen with the student board representative, but it is safe to safe to say that all parties want the students interest in mind.