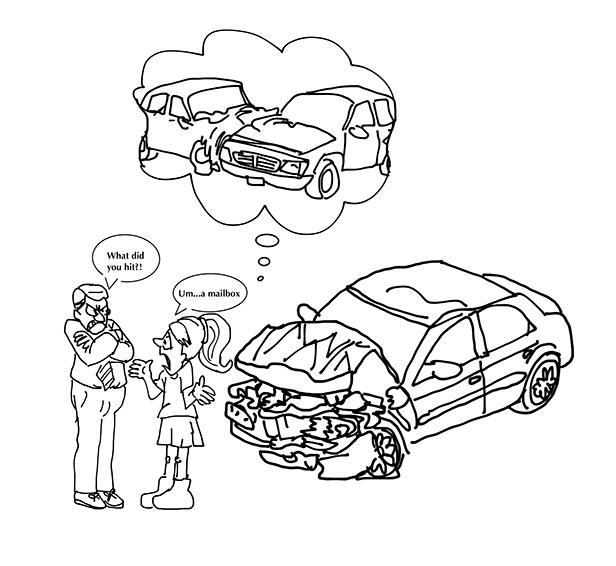 A few months ago, Hailey Sherman walked out to her car to see the back of it damaged. The damage was prominently there and Sherman was left furious because she got in trouble once she called her mother. She believes she got hit in the school’s parking lot, but did not notice until later.

“I found out in the parking lot of Merle hay mall when I was opening the door for my little sister,” junior Hailey Sherman said. “There was a scratch down my left rear bumper. It was down to the metal so whoever did it knew they did it.”

If a student hits a car and then leaves the scene, it is considered a hit and run. The students of both cars need to exchange information at the scene of the accident, but this exchange does not always happen. This issue does not stay in Johnston after students graduate, though. Hit and runs do not just happen in the school parking lot. These situations have now started to be reported.

“So far there have been two hit and runs on school property that have been reported this year,” police officer James Slack said.

There are many factors that go into investigating a hit and run. If a student reports what happened to the campus monitor Jan Bjurstrom, right away, the process should go smoothly. However if the student waits too long to tell her, or the attendance office, the person responsible for the hit and run will be more difficult to find. The student resource officer has to judge the crime based off of the amount of damage, and prioritize it carefully.

“Most investigations are handled in a similar manner,” Slack said. “The more information we have and the sooner we receive it the chances our investigation will be successful.”

The police come into the situation only if the student who hit a car leaves the scene. It is a criminal offense if the student just leaves and it is officially considered a hit and run. This can end up affecting the student’s license.

“The law says that you have to exchange information at the scene,” Bjurstrom said. “Which is driver’s license, vehicle registration, and insurance information.”

When investigating a case, the authorities use the reporter’s information to try and find the person who did it.

“If you do a hit and run, and we find out it’s you, then it turns into a criminal charge,” Bjurstrom said. “They can get charged with a traffic ticket, and [the charge] would go on your driving record.”

Besides the fact that hit and runs are illegal, these situations pack an emotional punch as well. Different students react different ways depending on if they are on the receiving end, or are the causing factor. These emotions can make one panic and forget what steps to take.

“There isn’t really any advice to give other than make a police report early on like the day of,” Sherman said.

Even though there are security cameras in the parking lot, the authorities can not rely on the cameras alone. There is no way to tell how long it will take to track someone down, because all cases have different information.

“Every case is different,” Bjurstrom said. “It depends on the information we have.”

There are times when police officers have to give up on an investigation because they cannot get the information they need from the report the student gave them. That is why some hit and runners are never found.

“We try to find out who, what, when, where, and how in every investigation,” Slack said. “Although, not all cases can be solved, we do everything we can to resolve the case, and answer the victim’s questions.”

After sharing information at the scene, the insurance can takes care of the rest. This way, it is not a criminal offense.

“The worst thing that could happen is it will cost you a little bit of money, but you don’t want to turn this into a criminal matter,” Bjurstorm said.