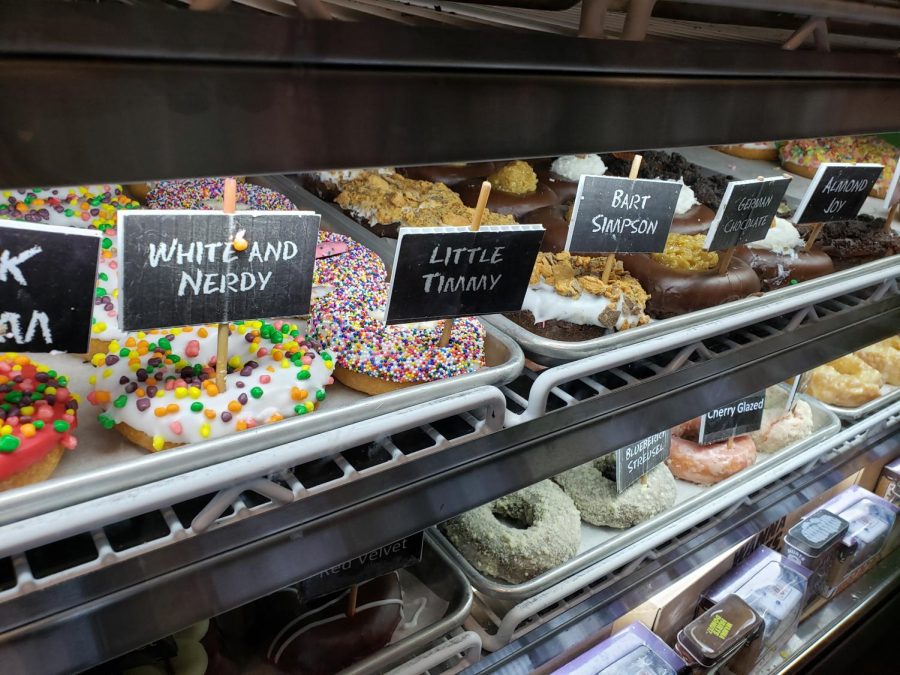 A selection of donuts presented in Hurts Donut.

Throughout my time in Iowa, donuts have been a popular pastry favorite; they are quick to get with minimal work, not very messy, and best of all, they are delicious. They’ll satisfy even the most stubborn of sweet tooths, and they are relatively cheap.

I had been to places like Dunkin’ Donuts and Krispy Kreme, but Hurts Donut was unfamiliar to me. As soon as I shared that information, I was told immediately by other newspaper staff that I had to try it, and that it was unfathomable that I had never even heard of it. Upon seeing photos of the donuts, I would have to agree. They looked delicious, had numerous characters and concepts that were easy to catch onto, and were topped off with intricate designs. It looked like donut heaven.

Saturday morning, my family headed to Hurts Donut to see if it lived up to the hype. We got a dozen donuts, and thanks to the size of them, they lasted us a day. That is a remarkable feat for any for any food when it comes to my family, particularly sweet foods.

After marveling at the selection, we each picked out three donuts. I am an avid chocolate lover, so the s’mores donut caught my eye, as well as the German Chocolate and Dirt Worm. By the time the dozen was in our hands we were ready to eat.

I went for my s’mores-themed donut first. The presentation was gorgeous and would attract any hungry stomach in a 10-mile radius. The donut had chocolate glazing, chunks of graham crackers blanketing the top, and a lightly toasted marshmallow in the center. It was seemingly calling my name. As for taste, if I am being honest, it was not all that I expected.

To be clear, I was expecting a donut that housed the flavor of three with such a stunning appearance that even chocolate haters could not deny. The s’mores donut exceeded in the exterior appearance by far. However, it tasted like most other donuts, minus the marshmallow flavor. It was not bad at all, and was the first donut I did not want to eat to save the design. While it did not live up to my expectations in exceeding the flavor of any other donut, it certainly was beautiful and still tasted good. What it lacked in flavor it made up in an astonishing design.

Next was the German chocolate. I was not sure what to expect of it, mainly because of the daunting golden-brown orb in the center. However, the simple chocolate glazing drew my attention, and the mysterious pile of what I later learned was coconut was endearing. So, unsure of what flavors I would encounter, I took a bite. The glazing was basic yet delightful, and while the coconut was a little too sweet for my liking, it was an easily likable donut.

While my expectations were still not met, I enjoyed the German chocolate donut. The flavor was more present than in the s’mores donut, and the design was very simplistic, which brought me back to my Dunkin’ Donuts and Krispy Kreme roots. I began to think my expectations were too high for any donut to come close, and that no one needs an astounding design or an explosion of finger-licking flavor to enjoy a donut.

That is, until I tried the Dirt Worm. Covered in chocolate glazing, tucked away by layers of dirt-like brownie, complete with a gummy worm on top; at first glance, it is the definition of a chocolate paradise.

As wonderful as it looked, I was a little doubtful of its flavor after the other two. They were both tasty and delightful, but nothing extraordinary.

When I finally took a bite, it was beyond my expectations. It was lush, chocolatey goodness, perhaps the best donut I have ever had, and my fanatic chocolate cravings were soothed for a day. Once again, a remarkable feat.

Overall, the Dirt Worm is all I can ever ask for in a donut. Beneath the gorgeous presentation is the finest, most impressive flavor I have ever tasted from a donut. Along with my three donuts, my family also enjoyed theirs with almost all positive reviews. None of us had ever been to Hurts Donut before, so we were blown away by the selection, presentation, flavor, and even just the aura of the place. It was a wonderful experience with a pleasant ending, so overall, I would give it a 10/10, and would go again.