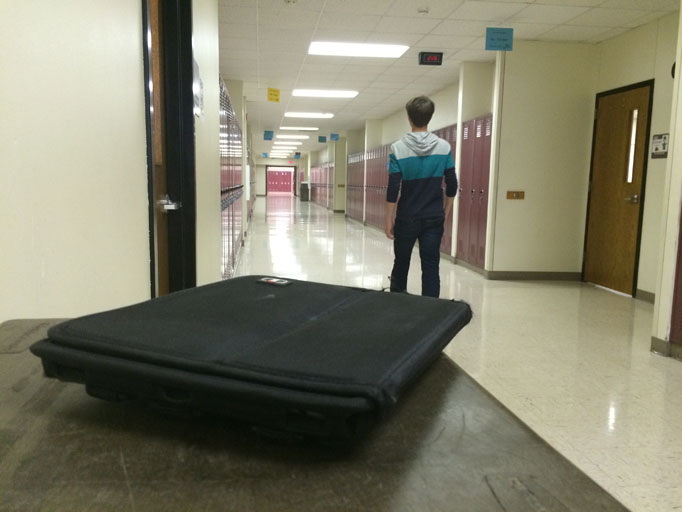 Students often leave their iPad around the school, resulting in iPad HQ having to track down the iPad.

Over the past two years, many issues with the iPads have developed, and one of these main problems is when students lose their iPads. Many have needed help from iPad Headquarters in the library in order to find their lost device, in which tracking technology assists in the search.

Technology Specialist Mark Wolter said this is not to be mistaken for tracking the iPads. “We don’t really track the iPads,” he said. He went on to say that the technology is only able to locate where the iPad was last connected to the Internet, and it can only give the general location.

The tracking only works to a specific point, or certain access points within the high school building. Wolter said it is similar to the application ‘Find my iPhone’ but has its differences. “We use an app called ‘Airwave,’ and it just shows up were they last connected to the network,” Wolter said.  “All we can do is track the IP [Internet Protocol] address where the iPad last connected to.” The IP address can track a student’s approximate location.

This technology use has helped many students locate their iPads whether it be at home or in the classroom next door. “If a student takes the iPad home and they connect to the Internet, we can see the IP adress at home,” Wolter said.

However, when the iPad needs to be found at school, the technology works a little differently. “As the Ipad moves from room to room we can see, this time it was here and this time it was there,” Wolter said.

As helpful as the technology can be, it is not immune to problems. Junior Nile Kroner has lost his iPads multiple times over the past two years. “I lost it three times last year, and something like three times this year,” Kroner said. Sometimes, however, the technology does not work. “Sometimes if you lost in the chemistry room, it tracks it to the social studies room, since [it is] up stairs,” Said Kroner.

He also said that it can be tracked to the wrong person’s iPad. “I have a cousin in the building and sometimes it tracks it to her iPad,” Kroner said. He said it usually takes about two periods for iPad Headquarters to locate his iPad.

Another potential problem rises if the iPad is not connected to the Internet when it is lost. “Once we have the data we can track it to were it was last seen, and see if it’s still there,” Wolter said. “But if the battery dies or it gets turned off, there is nothing we can do.”

However once they can find a connection they can track them with decent accuracy.

The idea of privacy is also important to Wolter when using technology to track students’ iPads. “The only time I get in is to help a student,” he said. “We have to be real careful about what we do, we dont want to infringe on other peoples’ rights. We can see the IP address at home, but we can’t see anything else,” Wolter said.