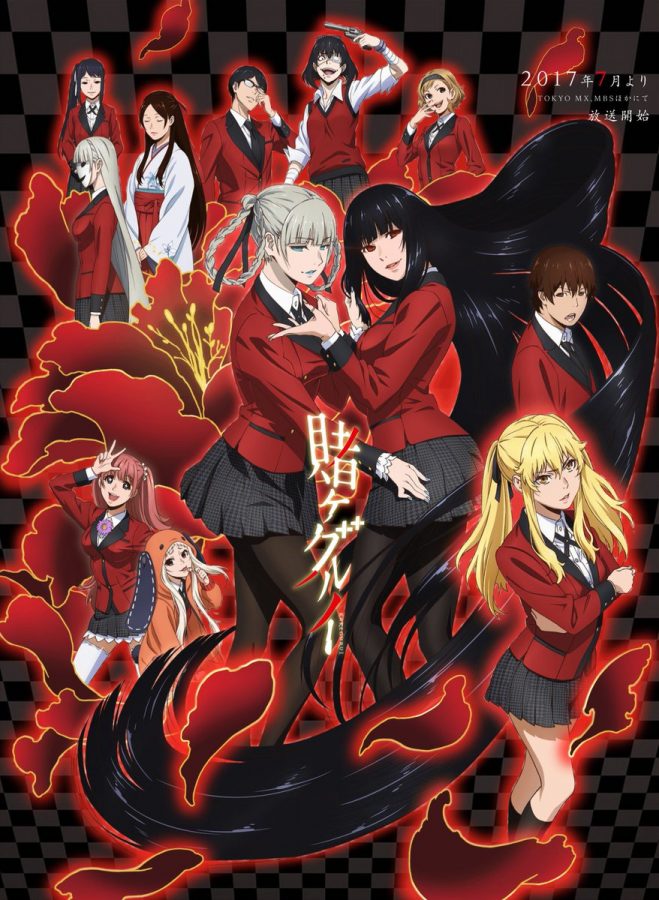 Kakegurui started off as one of the most disturbing anime I’ve watched in a long while. I believe it is a statement that all humans are capable of evil deeds and corrupt thoughts and that humans are capable of this from a relatively young age if they are taught to act this way. The students within the school are all from wealth and find those with less to be inferior. This belief was furthered by the way their school works. Everything is based on money and gambling, and those with high amounts of money are allowed to do anything to those in debt, or those who lost bets. Students willfully destroyed other peoples’ lives for fun due to this policy.

This is MAPPA studio’s first venture into a truly emotionally warped anime. In the past, they have created well-known ones such as Yuri on Ice, which is about ice skating and people trying to become the best skater in the world, and Kids on the Slope, an anime about three kids learning different styles of music. MAPPA studio generally uses extreme symbols to give meaning to characters, and always dive into weird stories that highlight people’s differences. Most of the time, their stories turn out wonderfully.

Kakegurui did not follow my expectations. From the first episode, I knew this would not be an anime that could appeal to my morals or artistic view. Each character would have a disgusting face when they showed their true thoughts and actions, despite acting like lovely children beforehand. They believed kids in debt were lower than human and would treat them as such. Even if the kid was a friend previously. The fact that they have changed their personality so suddenly or that they have hidden intentions is not the problem. My problem is that artist decided to dive into stereotypes of what a morally wrong person would look like and use each of the images, ranging from excessively large lips that are disproportionate to odd eye shapes and spit flying from the mouth.

I respect subtlety. Small hints of a person’s true personality showing through using a change in eye style or voice are my favorite techniques and still allow the characters to look appealing. Kakegurui had extreme amounts of changes all at once, and the changes were happening multiple times throughout an episode. Often enough that the changes became boring.

These personality shifts are not just seen in the antagonistic characters. The entire student body reacts this way when they find someone or something to make fun of.

One example of this is with Mary Saotome. Saotome was a prominent gambler among her grade and was respected by the majority of her classmates. After her defeat by the main character Yumeko Jabami, Saotome was declared to be livestock, which is the term for a student in debt. Her best friends came to her desk, which was covered in crude phrases making fun of her new status, and sneered in her face. They ordered her to clean up a spill and left the classroom as she was still on her knees wiping the floor.

Before this incident, Saotome used livestock to cheat in gambling or as furniture to further humiliate them.

All of the characters are still the middle school or high school age, though the exact grade has not been confirmed. Because of the rules of the school, the students are forced to participate in gambling large sums of money and must deal with the consequences of falling into debt. All students that are not livestock are able to order livestock to do undesirable activities, and the students are not allowed to disobey. Teachers do not interfere. The student council members are considered the leaders of the school. Members have the largest sums of money that may have been given by parents or were earned by the students themselves through gambling.

Despite all of these problems, none of them truly upset me to the point of disgust. I was disturbed with some of the actions but came to expect them from each character. After a very short amount of time, the average students became just that: average.

This leaves the student council to be the most disturbing group in the school. They are allowed to control every aspect of a student’s life, even the person they will marry in the future. For any livestock that does not regain their status as ‘human’ are forced to follow a life plan created by the council President which decides their future spouse and what job they will have. The only reason they managed to retain my disgust with them was that each member was completely different and we would only be introduced to them slowly.

The anime has no goal other than to have the main character, Yumeko Jabami, test her gambling against other high ranked members of the school, with her focus on the student council president. Jabami does not care to win and willingly gives away her rewards to other people because it would be interesting. Her personality ranges from being cute and innocent to demented and pushy. At the beginning of each game, Jabami is full of smiles and excitement to be gambling with someone new. After she finds out how each opponent is cheating, she pushes them to continue after revealing how they pulled off their tricks.

Many times, Jabami causes the opponent to have a mental breakdown while the game is still happening. She manages to convince each opponent that she knows how everything will turn out, and there are many times that she does. Others are complete bluffs that don’t always work out for her.

Despite all of the flaws with this anime, I am still intrigued due to morbid curiosity. MAPPA studio made an anime where people are meant to be disgusted, and their entire premise is based on how surprised they can make people as opposed to giving them a good plot to follow.

The only part of the anime which I truly enjoy is the opening song and the graphics that go with it. The music and theme match the gambling theme perfectly, which does mean that the message it sends is disturbing. However, the way the characters move is entertaining to watch, and all of the random objects floating around the screen make for fantastic visual appeal. It partly reminds me of Alice in Wonderland with the extreme strangeness of all the settings. I also love how it describes what happens within the anime without giving anything away.

Overall, I have to give this anime a 3.5/10. Despite how much I disliked the art and the characters, MAPPA studios managed to keep me watching to see what gross thing happened next.