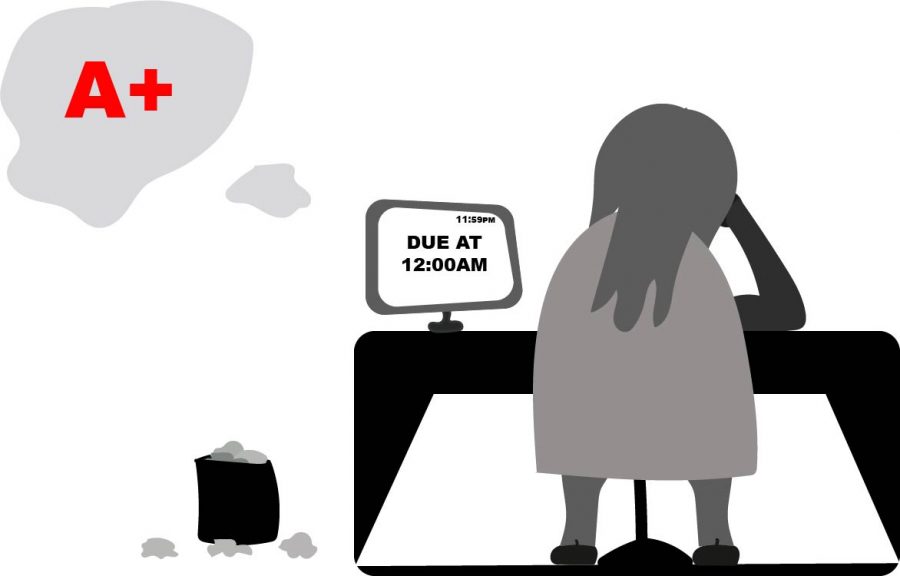 Students struggle with a variety of things, however a constant struggle that has survived over ages is the idea of perfectionism and procrastination.

Perfectionism is something that many people have probably dealt with at some point in their lives. According to the American Psychological Association, perfectionism is defined as “a combination of excessively high personal standards and overly critical self-evaluations.”

Rachel Ruisch ’21 identifies as a perfectionist. “Ever since I was young, if I would get a bad score on a test or not understand something right away, it would really frustrate me,” Ruisch said. “I would just think ‘Oh my gosh, the world’s ending.’ I still am like that to some extent. I think [perfectionism] is just kind of a pressure that I’ve put on myself, I really feel like I need to succeed and my version of success is getting a good grade or accomplishing some type of goal. Falling short of that is very stressful.”

There are many possible causes of perfectionism. AP Psychology teacher Jesse Dowell believes one of the causes is rooted in what people tell themselves. “A lot of times [people] tie their self worth to things like grades or if they’re an athlete, they might tie it to their performance in a game,” Dowell said. “These things can become a big part of who we are. Sometimes people who are perfectionists don’t have a way of separating out and saying ‘Okay, I’m good at this, this, and this, but I’m not as good at this and this, and that’s okay. I’m still just as valuable and worthy of a person because of that.'”

Another potential cause of perfectionism is having a fixed mindset. Someone who has a fixed mindset believes that their qualities, skills, and comprehension are “fixed,” or in other words, cannot change. This mindset can lead to perfectionism and a fear of failure. “People who have a fixed mindset tended to be really strong students when they were young,” Dowell said. “People would always tell them they are brilliant and ahead of the curve, and they learn ‘I’m born this way. School should be easy, I shouldn’t have to try.’ Later on, they finally get to a point where they are challenged. Instead of saying ‘It’s okay that I have to work hard,’ they say ‘If I actually have to try now, maybe I’m not that smart.’ That can create things like procrastination because it’s kind of hard to accept your ceiling.”

Dowell believes the biggest way to ease stress and combat a perfectionist mindset is to realize that it is impossible to be perfect at everything. “There’s a quote out there that I like: ‘Don’t let good be the enemy of great,'” Dowell said. “That is kind of the inverse, saying don’t just settle for good enough. But I actually like to flip it around sometimes and say ‘Don’t let great be the enemy of good.’ There’s not enough time in your day to be good at everything. I think about my roles as a teacher, father, and husband, and very rarely do I give myself an A on all of those roles in a given day. You can’t do everything perfectly. That’s just part of life. I think it’s good to try and do better, but don’t beat yourself up and think worse of yourself [if you do not do everything perfectly]. Don’t let it consume your value as a person.”

Procrastination is something that is very common among people as well. According to Psychology Today, “Procrastinators chronically avoid difficult tasks and may deliberately look for distractions.”

Ruisch is one of many students who struggled with procrastination. “Definitely in sixth and seventh grade I was a procrastinator,” Ruisch said. “I would wait until like 10:00 or 11:00 the night before to start something or do something. I would just get so anxious about it.”

As a result of the anxiousness,  in eighth grade, Ruisch came up with a system of setting aside 30 minutes right after school to get all of her homework done. This system has helped her a lot, because she became very involved with extracurriculars. “I really enjoyed feeling that way, going to my activities without having to worry about anything when I got home,” Ruisch said. “I stayed really busy year after year, so I kept that mindset of ‘I have this amount of time to do my homework, so I’m going to do it during this chunk.’ That’s how I shifted from being a procrastinator to not being one.”

There are many possible causes of procrastination, but Ruisch believes procrastination results from a lack of interest that students have for their classes. “I feel like everybody tries to pinpoint procrastination on so many different things,” Ruisch said. “It’s like ‘Oh all these kids just want to go on their social medias or they want to be on their phones or hang out with their friends.’ And it’s like yeah, but you’re also not teaching something that’s engaging that I want to learn more about outside of the eight hours that I’m in school. Maybe we need to take a look at what the classes are doing and make it engaging. I know there are so many classes that are interesting and that interest makes me want to do my homework.”

In order to help combat procrastination, Dowell suggests making a schedule, even if it may be challenging. “It’s really difficult, especially with young people and it’s even difficult for adults because we have a lot going on too,” Dowell said. “I’m one who gets a lot of enjoyment from not feeling pressure at the end. Flip it around and think about the anxiety you’re going to relieve yourself from if you don’t have to worry about that.”

Ruisch uses this method, and it has been working well for her. “A tip I learned from a friend was set a timer for 30 min and get as much done in that 30 min as you can, then take like a 10 min break, and if you still have stuff to do, do another 30 min,” Ruisch said. “That kind of helped me be like ‘Okay I have a set amount of time to get this done, and then I’m done.’ I’m also very competitive, so having a countdown really helps me.”

Dowell also recommends approaching school as an opportunity to grow and learn, rather than focusing on the grades. “Don’t think of it as just ‘Oh I have to get a 92 on the test to get my A,'” Dowell said. “If you really think about the enjoyment of learning, that usually helps too.”