Lewis is getting a boat 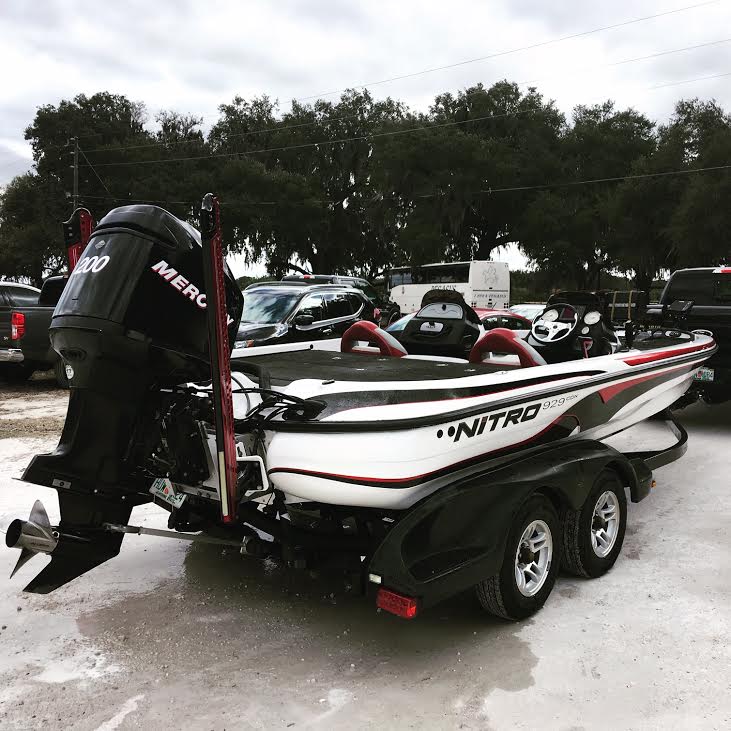 The new boat recently purchased by Johnston Fishing Club coach, Justin Lewis. Lewis flew to Tampa, Florida in order to inspect and purchase the boat. (This picture was provided by Justin Lewis.)

Last year, Owen Ness ’19 and Isaiah Evans ’19 helped establish the fishing team. They were the ones who came up with the idea of putting a team together, setting the idea in motion, getting sponsorships and equipment, and most importantly, finding a coach. They immediately went to one of the schools notorious fishing fanatics – math teacher Justin Lewis.

For Evans, Lewis was a clear candidate for the coaching position. “I’ve always been a huge fisherman and I knew Mr. Lewis was too,” Evans said. “So it was a pretty obvious choice.” These tournaments generally take place in distant parts of the state, and sometimes even across state lines.

Because attending the tournaments consists of a lot of traveling to, for the most part, fairly remote parts of the state for multiple nights, convenience is an important part of the teams routine. “We all have to come as prepared as possible for the tournaments,” Ness said. One of the preparations the team needs to make is providing their own boats for their team to use. For the past few years, they have been using different boats provided by various people, such as officer James Slack or family boats of team members.

Having boats they know they can depend on is essential for the fishing team to stay competitive as a team. “The boats are necessary as the anglers (fishermen) cannot fish off of the banks in a tournament situation,” Lewis said. “Therefore we have to secure volunteers, or have a boat through the club so that at least one team can compete at every tournament. It also serves as the live-well to keep the fish stored alive and healthy until weigh-in.”

Because there is a lack of week-to-week certainty that comes with depending on volunteers, Lewis recently made a monumental decision for the team’s future. Lewis found a boat for sale down in Tampa, Florida, and has worked with the school board in order to acquire it for the fishing team to use in tournaments. “This was not an easy process,” Lewis said. “It involved speaking with multiple building administrators including our, at the time, interim-Superintendent, now Superintendent, our Chief Financial Operator, and then finally our School Board.” Lewis said of convincing the districts administrators to grant him permission to buy the boat. “The anglers presented, among other items, the importance of self-reliance for tournaments as we currently rely entirely on volunteers to supply boats, as well as their time, to allow our anglers to compete.”

When Lewis was given approval from the district’s higher-ups, he paid for his own plane ticket to Florida in order to inspect the boat. “The expense was entirely mine because I believed in what the club is doing and that these anglers deserve it,” Lewis said. After spending around an hour inspecting the boat and its trailer on land along with asking the seller questions, Lewis and the seller took it on a test drive around multiple chains of lakes in the Tampa area.

After Lewis was content with the boat and everything it offered, he made the final decision to purchase it. “We were grateful that all of the individuals mentioned were willing to listen to our club,” Lewis said. “They asked great questions, and in the end supported the purchase.”

The boat is currently in transit, having left Tampa on Jan. 17. While Lewis and the club are not entirely sure where the boat will be stored yet, the impact it will have on the future Johnston fishermen will be profound. “The purchase of our own school boat will allow the fishing team to have a presence at all of the tournaments throughout the year for at least a single team,” Lewis said. “It also allows for a great deal of learning to occur regarding boats, boat maintenance and safety.”

With the purchase of this boat, a new era will start for the fishing team. “This boat means more to this club and team than anyone can understand that isn’t a part of it,” Lewis said.