From pastime to profit 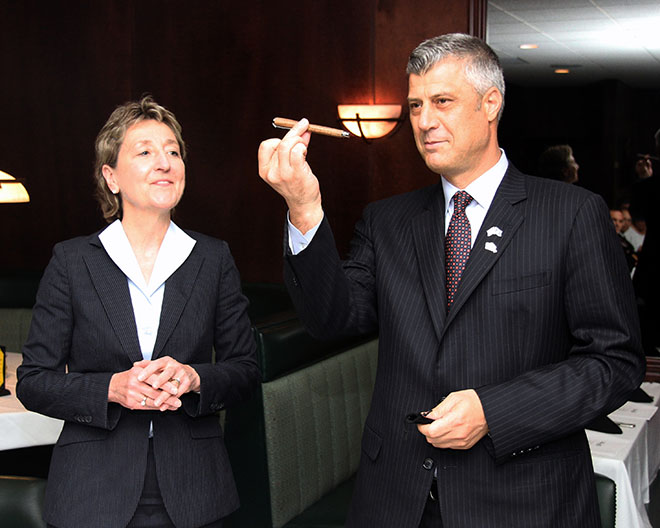 Mayor Paula Dierenfeld presents the Prime Minister of Kosovo, Hashim Thaci, with a pen made by Jesse Balmer. Balmer's pen was chosen as a gift to give to Thaci. "I was very honored when my pen was chosen for the prime minister and I was shocked that I would be able to give one of my products to such an important person," Balmer said.

In possession of the first Prime Minister of Kosovo, Hashim Thaci, is a brown pen made by sophomore Jesse Balmer. “The whole city of Johnston presented [Thaci with] a gift for coming, so they chose one of my pens and gave him that,” Balmer said. The country of Kosovo is partnered with the city of Johnston.

Balmer makes pens like the one presented to Thaci for the community. Each pen takes around an hour and a half to make, but sometimes they can take much longer depending on the design. “I spent about five hours on one of the pens,” Balmer said. “Like this one is a bunch of slices of acrylic, they’re all glued together so that took a long time to piece together.”

When Balmer makes the pens he makes the body of them. “I have a lathe in my basement, which is a machine,” Balmer said. “It takes a block of material, whatever you’re going to [make the pens] out of, and it spins it so I cut it with a chisel while it’s spinning and that’s how it gets rounded.” But in order to make the body he must hold possession of materials.

“I make this material [the outside of the pen] out of plastics, wood, deer antler, all sorts of stuff,” Balmer said. He buys a majority of these materials online, however he gets some materials like the deer antlers himself. Things like the tips of the pens are not personally done by Balmer himself.

Brian Balmer, Jesse’s father, taught him how to make these pens. “He’s very creative and needed something to occupy his time,” Brian said. Jesse has made around 1,100 pens since he started about three years ago. “It was pretty cool to make my first pen,” Jesse said. “It opened my eyes to what this hobby could turn into once I sold my first pen.”

Jesse sells his pens at farmers markets, art shows and by word of mouth. “He has done a good job marketing himself,” Brian said. “Going to the farmer’s markets and things I didn’t do that for him, he’s done that all himself.”

Balmer also does orders for companies. “I’ve had one company order 40 pens of the same kind,” Jesse said. Company orders tend to come through his father who gets the chance to tell others about them through his work. “I own my own business and when people come in and see me using one of his pens they ask where I got it so I explain to them what he does,” Brian said.

Each pen costs around $40 with the cost of materials being about half of that. “It has taught him how to manage his money,” Brian said. “He knows he has to buy material and so he can balance his money that way.”