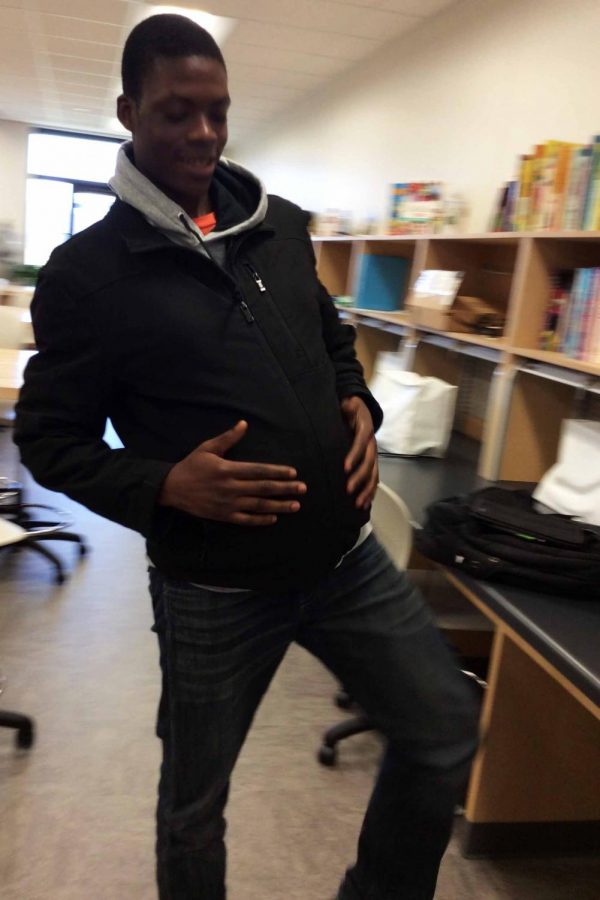 Kalambayi Ntambwe '18 demonstrates his mobility with the empathy belly by doing a suggested exercise activity. Physical activity is necessary for a pregnant mother in order to keep balance and reduce back pain.

Only one man out of the entire student population challenged themselves to the extent Kalambayi “Moses” Ntambwe ’18 did. He pushed through student humiliation and social ridicule to understand what many women will go through in the future. The class Exploring Parenting gave students the opportunity to wear an empathy belly, which simulates the symptoms of pregnancy eight months in. They had three options: wearing it for half the day throughout school, wearing it during class for a week and completing a written assignment. The only other male in Exploring Parenting opted to wear the belly during class.

Ntambwe wore his belly the first half of the day, from first period to the end of fourth. For the most part, his experience was awful. “I almost fell down the stairs twice,” he said. “I could not fit in my desk, I could not bend over to reach something, I could not keep balance.”

His difficulties were not limited to everyday activities. “When I get to my class, the first thing people did was just start laughing,” Ntambwe said. “They were making fun of me, some of them were joking that I was gonna be a good mother.”

Despite the judgment, Ntambwe was proud of himself for participating. “I can finally experience how females feel when they have a pregnant belly,” Ntambew said.

Jennifer Smith, the Exploring Parenting teacher, is amazed by Ntambwe’ determination. “It’s not highly accepted,” Smith said. “The age group we’re doing it with, they’re going to make laugh and make fun and stuff, rather than realize the whole picture is that you’re gaining empathy, you’re gaining understanding by being put through this.”

Smith did not believe Ntambwe would decide to wear the belly because in the beginning of the school year he was adamant about not participating. “At first it takes him a lot of talking into,” Smith said. “To hear that he’s changed his mind and so on, It’s awesome that he’s open to it.”

This experience is going to better prepare Ntambwe by helping him understand his future wife and how to help her through pregnancy. “He’s going to be an amazing spouse first, and an amazing father,” Smith said. “Just wearing the belly, and then being in this class is going to expand his idea of how to parent.”

Smith wants people to understand that parenting is a partnership. “We have all girls for the most part in here because it is seen as the mother’s job to parent,” Smith said. “As a society, we need to change that. I think what Moses has done is the start of it.”