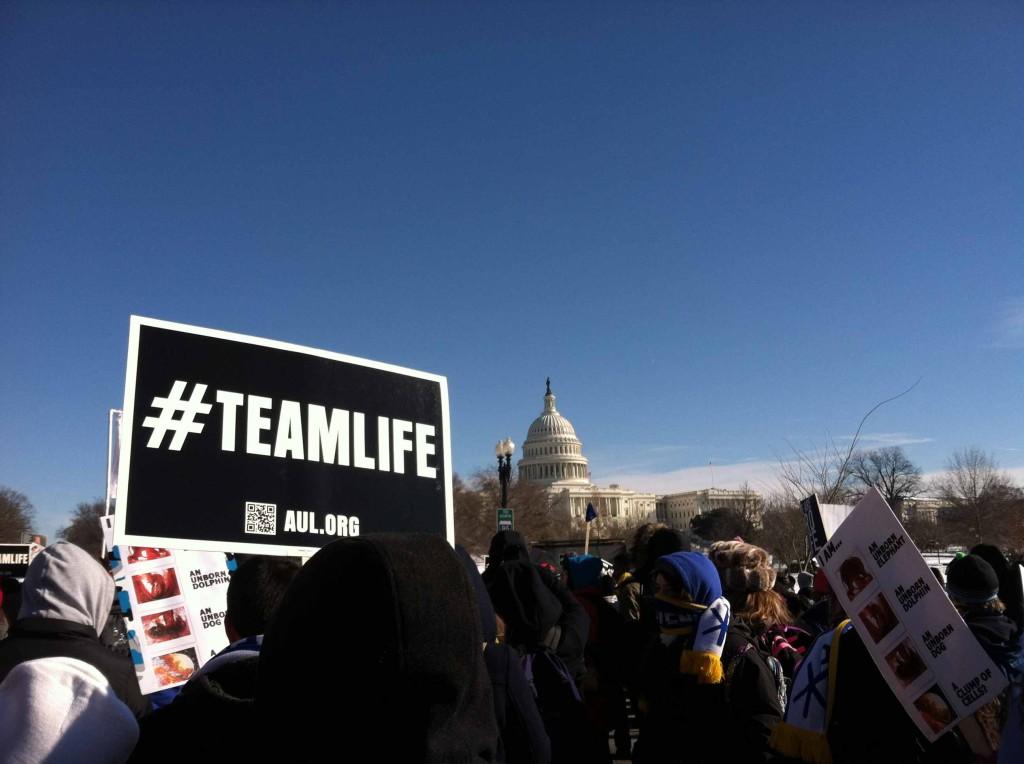 Society often makes us feel like we are alone if we disagree with the status quo. Society makes us feel like we should just sit down and be quiet. When senior Mallorie Goodale and I went to Washington, D.C. for the March for Life, I had no idea that when I got there, our nation’s Capitol would be full of people who had made the pilgrimage for the same reason that we had. Everywhere we went, whether it was out to dinner, monument touring or site seeing, we bumped into fellow pro-life marchers.

The morning of the march was a whirl wind. We woke up, put our bags on the charter bus and headed to the Verizon Center for the Youth Rally and Mass for Life. Our group was one of the first to get there and when I looked around, I thought that there was no way that a bunch of teens were going to fill the stadium that is comparable to the Wells Fargo Arena back home. After a few minutes though, the seats began to fill in and the energy was something you couldn’t help feed off of. Being surrounded by people of the same faith, same age and same purpose was comforting and I began to realize that there were thousands of people who believed in the same thing as I. Though, the 28,000 that showed up for the rally were nothing compared to what waited outside.

As we began to make our way to the National Mall, crowds of people were everywhere. Once the March began, we could tell we were very close to the front of the pack. Keep in mind that “the front of the pack” was more like the first 500 people making their way up Capitol Hill. The enormity of it all still hadn’t struck me until we left the marchers and headed down to Union Station. We had been at the top of the Hill for a good 20 minutes and as we made our way back down, I looked at the crowd still marching. I couldn’t even see the end of the marchers. I began to fathom how many people would have to be marching in order to have a very large number standing still for about 20 minutes and still not even be half. When the numbers came out, 600,000 to 700,000 people marched that day. All for the end of abortion and for the right to life to be given to every individual, no matter how small.

This year was my second March for Life and the experience still did not fail to amaze me. A lot of times it seems I have the unpopular opinion being pro life and it can be disheartening. When I am in Washington, D.C. surrounded by people with the same beliefs as me I know that what I feel at school is not reflective of the nation.

While marching, people all around me were taking pictures. Many people posted their pictures on social media with the hashtag #whywemarch. I found myself scrolling through pictures of fellow marchers who also used that hashtag and really enjoyed see their march experience and why they march.

The reason for marching is so important for us to remember, especially when our views are questioned. So, why do we march?

We march to save human lives.

We march because the issue of abortion is not a religious issue, but a civil rights issue.

We march to stand up for women.

We march because life begins at conception, not at birth.

We march because as Martin Luther King Jr. said, “Our lives begin to end the day we become silent about the things that matter.”

We march because 1.3 million babies are aborted each year in the United States while only 135,000 are adopted.

We march because abortion hurts men and women.

We march because a fetus is human life. Fetus in Latin means “small child.”

We march because a baby should not be punished for the crime of the father.

We march to save women from the complications that follow abortions, such as increased risk of breast cancer and likelihood of future miscarriages.

We march because motherhood is not a punishment but a gift.

We march because as Abraham Lincoln said, “No law can give me the right to do what is wrong.”