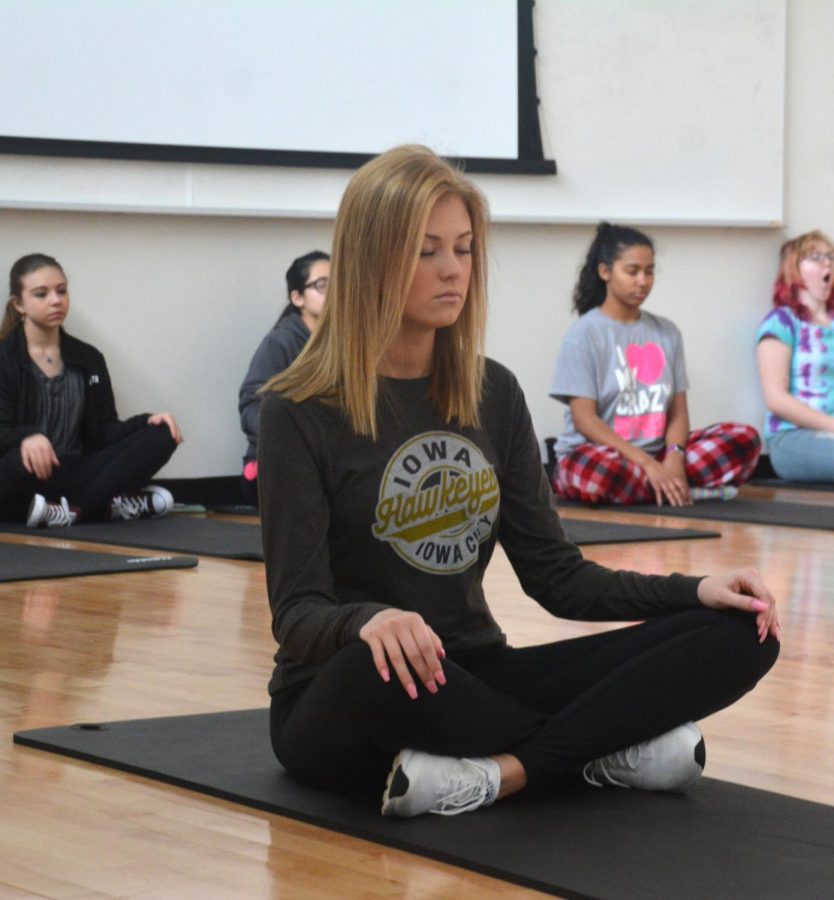 The wind blew hair in her face as Olivia Arnold ‘19 stepped through the front doors of the high school. While Arnold slowly made her way to first period physical education, all she could think about was the multiple tests that filled the day ahead of her. As the class sat down and began to listen to that day’s meditation track, Arnold gradually felt all the stress leave her body, relieved to know she had no reason to worry for the rest of the period.

According to Harvard Health Publishing, mindfulness meditation has become more popular in recent years. The purpose of meditation is to reach a thoughtless state of consciousness that helps reduce stress and improve mental health. This state can be reached in various ways, generally including several minutes of sitting, deep breathing and sometimes background music. Meditation is also the newest addition to Track 1, a physical education class taught by Deb Nicholson.

Students in Track 1 participate in meditation along with yoga every Monday. At the beginning of both semesters, Nicholson gave students a lesson on how to do meditation and the benefits it provides. The elements of meditation that were introduced in the lesson are used by Nicholson and students to create a successful environment for meditation. During meditation, Nicholson plays music and videos ranging from guided meditation to soundtracks with relaxing ocean waves. Students can sit on yoga mats in the center of the room or up against the walls. Nicholson encourages students to place their hands on their knees and to close their eyes. In general, the meditation lasts between five and ten minutes.

Nicholson made the decision to add meditation to Track 1 at the beginning of this year. “Meditation is the mental part and physical education is supposed to be the physical part, but I wanted to add that component in because I know mental health is a big issue these days,” Nicholson said. “I’d just heard about [meditation] and I was thinking that we should try to introduce that and get that into the system and I thought the multipurpose room is the perfect environment to do that, with the mats and all.”

Makenna Gregurek ‘20 is one of the many students that see meditation as a helpful way to relax during their taxing day. “I enjoy meditation during school because it is a way to almost ‘press pause’ on all of the stresses of life,” Gregurek said. “I have PE 5th period— almost in the middle of the day— so it helps me to destress and feel more relaxed for the rest of the school day.”

Whether they have Track 1 at the beginning of the day, the middle, or the end, students continuously see and feel benefits. While not all students enjoy meditation, Nicholson hasn’t had many complaints. “I haven’t had anyone really come to me and say ‘This is stupid. I don’t want to do this,’” Nicholson said. “I don’t know if they are just going through the motions and if they don’t like it unless they say something.”

Even though some students do just go through the motions, others try their hardest to clear their heads and really focus on the moment. “While I’m meditating I honestly don’t think about anything,” Gregurek said. “I try to let go of everything I’ve been thinking about that day, however sometimes that is hard to do when I have several things that I need to get done. But I find that not thinking about anything is what relaxes me the most.”

Some students have also found meditation to be helpful outside of school. Madeline Proudfoot ‘20 found herself using meditation on her own time after her doctor suggested meditation to help relieve her severe headaches and migraines. At first, Proudfoot was skeptical, especially when her doctor mentioned imagery meditation, a practice where you envision something calming. “[Proudfoot’s doctor] said pretend you’re walking on a beach or something and at first, I was like ‘this lady is crazy’,” Proudfoot said. “Then I started thinking that I’ll just pretend I’m in the woods because I like the woods and stuff.”

Eventually, Proudfoot found meditation to be helpful with her headaches. Now she implements the practice into her daily routine. “I try to do it before I go to bed so that it can calm me down so I can go to sleep,” Proudfoot said. “I think it has also helped me calm down when I’m stressed out because it gives me a break from thinking and worrying about everything.”

Nicholson believes that meditation can help students relax. “I think it brings you to the present,” Nicholson said. “I think a lot of us are so wrapped up in the outside world, with social media and things that we forget to just slow down and think about the present time.”