The horse that started the pony car. 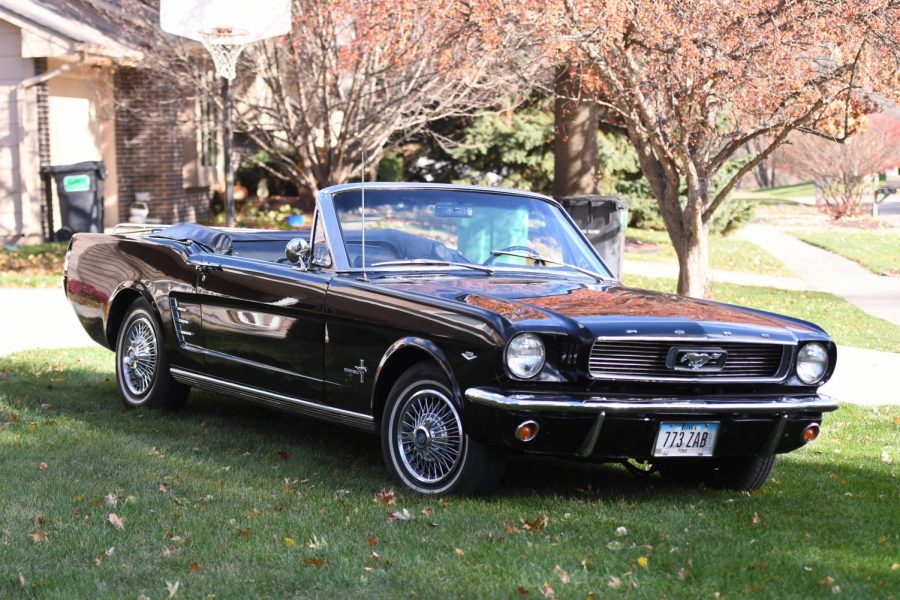 In the early 60’s a man named Lee Iacocca, the Vice President and General Manager at Ford, decided that Ford needed a four-seater with two doors to attract a younger audience. Iacocca wanted a small, sporty car that would be under 2,500 pounds and cost less than $2,500.

On April 17, 1964, Ford introduced the new 1965 Ford Mustang at the World Fair in New York. The Mustang went up for sale later the same day. Ford expected to sell 100,000 cars yearly. Little did they know that they would sell 22,000 on the first day. The only thing that limited the sale of the new pony car was how many could be produced. In the next year the muscle car sold 400,000 units and brought in $1 million. The Mustang has happily sold for the past 60 years and doesn’t show any signs of stopping with its current sixth generation doing just fine.

The first generation Mustangs ran from 1964 to 1973 and came with the iconic GT package that was equipped with a 289cu in (cubic inches) engine with a 2-barrel carburetor making a respectable 225 horsepower. Some of the Mustangs had a K-code (which means the cars vin number had a K in it telling you what the engine is). These Mustangs came with the same 289cu in, but this one had a 4-barrel carburetor bumping power to 271 horsepower. In 1965 a man named Carroll Shelby got his mitts on some Mustangs and put a high-riser intake manifold on the 289cu in V8. This boosted power to 306 bhp and 329lb-ft of torque. Although this pony cost a pretty penny she wasn’t built for comfort.

Shelby also made 34 GT350R Mustangs; these cars were made to be flat out race cars following SCCA rules and the model was B-production champ for three straight years. All of the 1965 GT350s were painted in Wimbledon white and had guardsman blue rocker stripes. In 1966 the Shelbys and Mustang remained unchanged except for coming with a bunch of new colors. In 1967 Shelby’s New Shelby GT500 came with a 428cu in Cobra Jet engine making around 365 horsepower. The rare GT500KR (King of the Road) had the same 428 Cobra jet engine as the base GT5000 and Ford claimed it made 335hp, but everyone knew this was a joke with it making horsepower numbers slightly north of 400 and a powerful punch of 440lb-ft of torque. Not too bad for the small pony car. In 1967 the base Mustangs also got a redesign. It got heavier and a bigger engine bay to fit Ford’s new top of the line 390cu in engine making 335hp. Midway through 1967 the car became the ultimate drag racer for the street when this model got the 427cu in V8. Before 1973 the Mustang got two more major redesigns. The first was the best. They also introduced three models with the Boss 302 and 429 both having, you guessed it, 302cu in and a 429cu in engines. There were only 1,628 Boss 302s and 429s sold combined so this makes them rare and desirable. I want to own a Boss 429 with a matte black paint job and the glossy lime green racing stripes so bad. I alway have since I was a little kid in elementary school before I knew anything about cars. Due to declining sales of the 1969 GT, Ford introduced the Mach 1 coming with the three engine options: a 351cu in V8, a 390cu in and a 428 Cobra Jet. The Mach 1 lasted two years in 1969 and 1970. Some notable cars in the first generation:

0100 the first GT500 built
0131 the only Shelby GT coupe built. Nicknamed Lil Red and inspired Lee Grey to create the special edition CS(California Special) for Californians. Lil Red was found rusting out in a Texas field in March of 2018
0139 marks the only GT500 convertible ever made.
The 1967 GT500 was converted into a monster after Ford put the 427 FE GT40 engine in it built for Le Mans. This snake pushed 650 horsepower and was coined with a fitting name “Super Snake”. During a demonstration by Carroll Shelby himself the car hit 170 miles per hour. Back in January of 2019 the Super Snake sold for $2.2 million making it the most expensive Mustang ever sold at the time. If money were no mean this would be the first mustang that I would buy because this car has those looks of the sporty 2 door coupe from the 60s but the beating heart of a lemans legend.
In 1968 a movie named “Bullitt” came out starring Steve McQueen as a daredevil detective fighting crime in San Francisco. McQueen drives a highland green Fastback GT Mustang. This mustangs reappeared recently and sold at an auction for $3.4 million in January 2020 making it the most expensive Mustang ever sold.

The second generation Mustang was introduced in late 1973. This new Mustang was named the Mustang II. Crippled by the oil crisis in 1973 the new Mustang came on a layout similar to the Ford Pinto to hopefully become less harsh on fuel unlike its tire-smoking, first gen brother. It came with three engine options: a 140cu in I4(in-line4), a 171cu in V6, and a 302 V8 making a tiny 140hp. The Mustang II came as a 2-door coupe or a 3-door hatchback. The Cobra and GT350 returned, but they were just appearance packages. The Mustang II did not leave a lasting impression and was gone by 1978 to make way for its new brother, thank God!

In 1979 the new fox platform Mustang was introduced, now known as the fox body Mustang. This third gen Stang had seven engine options coming with a 2.3L I4 at the bottom and the glorious 5.0 or 5L(302cu in) V8. It also came with an option of a 2-door coupe, 2-door convertible, or 3-door hatchback. In 1982 the GT package finally returned after 13 years and Ford came out with the slogan “The Boss is back.” This fox came with the “5.0” making a respectable 175 horsepower (still not enough). Ford also sent 15,000 SSP (Special Service Package) to the police departments around the United States. In 1983 the Mustang would get a slight facelift. Ford’s performance division came out with the SVO (Special Vehicle Operations) Mustang. It came with the 2.3l turbocharged I4 making 175 horsepower after upgrading the fuel and intercooler systems. The SVO would last until 1986. In 1987 the fox body would receive one more facelift, my favorite of the three. It lasted until the end of its run in 1993 making the fox body the longest-produced Mustang ever. In 1993 the car’s 5.0 would be upgraded to 205hp. The newly-formed SVT (Special Vehicle Team) branch would eliminate SVO and produce a new Mustang. This group got their hands on a 5.0 and boosted power by 30 horsepower. The new SVT Cobra would make 235hp and 285lb-ft of torque. The SVT also produced a Cobra R (whispers* “the R stands for Racing). The Cobra R came with the same engine as the base Cobra, but didn’t come with air conditioning, a stereo or backseats to try and cut some lbs from the beefy pony. It was only offered in vibrant red with only 107 being made. This is another case of if only I had the money. The sneaky little fox looks extremely good with that hatchback. It would be fun to blow past my mom in her third gen hatchback Camaro. Hatchback v. Hatchback. Two windows down, 65mph, because who needs A/C?

In 1994 the fourth generation Mustang or SN-95 would be introduced also on the fox platform. This Stang would have the 5.0 return for 1994 and 95. The 1995 Cobra R had a redeveloped 5.8L Windsor V8 making 300hp and 365lb-ft of torque. Only 250 were made and they were only available in crystal white. In 1996 the Mustang’s engine would get swapped for a 2v 4.6L SOHC making 235hp (2v means two valves). The car has one valve for exhaust to be pushed out of and one intake for a fuel and air mixture to enter through. SOHC stands for single overhead cam meaning that the car has one camshaft that opens the valves. This would be the top engine for the GT package. The new Cobra would get a 4v 4.6L DOHC making around 305hp and 318lb-ft of torque. In 1999 the Mustang’s power would get upgraded to 320 horsepower and 318lb-ft of torque. In 2000 the Cobra R would return one last time. After the 1999 Cobras were having problems, the 2000 base Cobra was canceled and the Cobra R became the only high performance Mustang. The new Cobra R became the fastest factory Mustang ever with only 300 units produced. It had a naturally aspirated 5.4L V8 making 385hp and it could go 0-60 in 4.7 seconds and was once again only offered in red. In 2001 the Mustang GT got a special edition Bullitt package to honor the original car. This Mustang had a 265hp 2v 4.6L V8. Following its successes, Ford decided to resurrect the Mach 1 name badge in 2003-2004 coming with the same DOHC as the previous Cobra Mustangs. Its engine was also shared with the Lincoln Aviator, and my precious Mercury Marauder. As a final send off for the 2003-2004 Cobra Mustang some Ford fans were disappointed with the performance so SVT got together to make one of the most legendary Mustangs and muscle cars ever. The Terminator Cobra. It came from the factory with a Eaton M-112 blower giving this Snake a screeching 390hp and 390lb-ft of torque. This is my favorite Mustang that Ford has ever produced. The wide open grille with that nasty little cobra gives this Mustang a menacing look and paired with that 4.6L S/C V8 that could make horsepower numbers into the 400s with a lower pull kit is awesome. This Mustang was timed perfectly with the 2nd gen Lightning and the Marauder to bring back that muscle that had been lost since the 60s.

From 2015 to now the sixth generation or s550 Mustang has remained the same with the 5.0 V8 powering its GT model. There’s not much to talk about here. You’ve all seen them driving down the streets, but there are two to talk about. First, the 2018 Cobra Jet Mustang. The car was built from the factory to be a pure drag racer and not street legal making close to 1,000hp powered by a 5.2L Coyote and a 3L Whipple supercharged. Lastly, is the 2020 Shelby GT500 and GT350 coming with another supercharged 5.2L Coyote. The 2020 Shelby Mustangs make 526hp from the GT350 and 760 from the GT500. After 60 years of Mustang, Shelby’s name won’t ever grace one again.

Mustang was once a pony car that Ford made to bring in a little more revenue. Little did they know that now when people think of Ford they think of the silver bronco running across the grille.