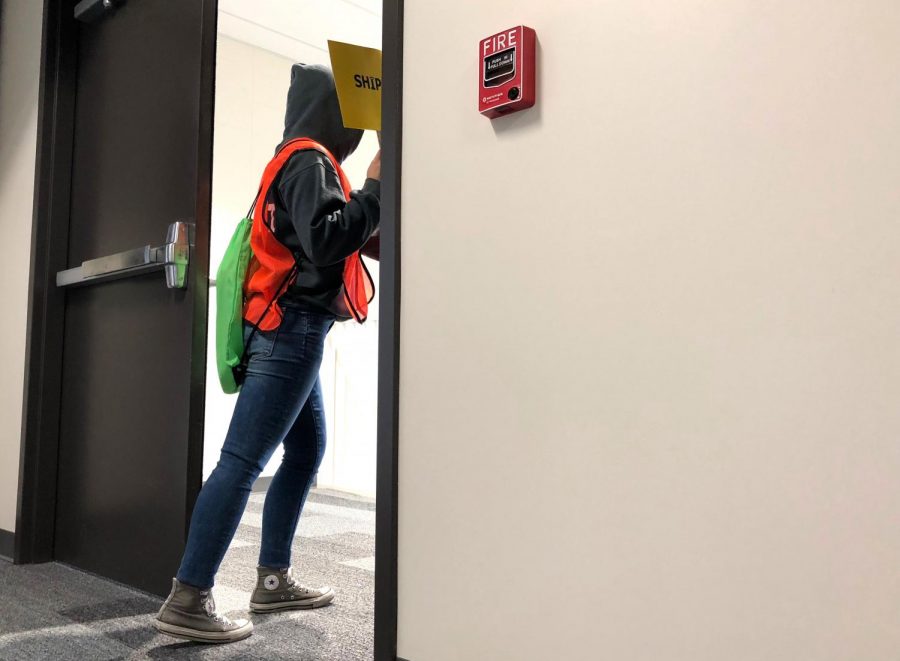 Office staff were frazzled when an alarm started beeping. “First time it went off we were like ‘Huh, what’s happening?’ associate principal Jerry Stratton said.

This alarm was a pre-alarm, which often goes off before the actual fire alarm happens. When a certain amount of smoke is in the air, the pre-alarm will sound. “If you’re vaping in our building, we may know about it because a fire-alarm will tell you that this is starting to happen in this area,” Stratton said.

With a new building comes new safety features, such as the pre-alarms, and different ways staff must conduct drills due to the layout of the building.

The first reaction from many students after seeing the new high school was concern regarding the glass windows. The glass presents some problems for how administration and staff conduct drills.

During tornado drills, staff and students are required to head to the lower level of the building. There, they must stay in either the wrestling room or the cage room area. Despite students concerns, Stratton believes the school has everything under control. “Our only concern is getting kids down there,” Stratton said. “We are going to rely on our weather people and talking about make sure we have enough time and when do we need to start moving.”

Hannah DeBruin ‘18 is not concerned with how tornado drills are handled. “Honestly, I think if it’s a tornado drill, they’ll probably have enough time to have everybody get to a safe area because there’s enough advanced warning nowadays,” DeBruin said. “It’s not a huge issue.”

Social studies teacher Jessica Dowell believes in some respects the windows are good. Most of the classrooms in the building have an outside access due to a window. “If we needed to, we could go through the window,” Dowell said. “Whereas in the old building, we had a lot of rooms that had no windows, so they had no exterior access if you needed leave via an alternative exit. You were kind of stuck there.”

In fact, Stratton reports that during the recent tornado drill, the amount of time it took to get all students to a safe location was the same as at the old building. “It took us around five and a half minutes,” Stratton said.

These underground structures are considered to be very safe and can withstand high tornadic activity. “Even though we’re talking about a significantly bigger building and more students, it was still about the same amount of time it was taking us to get all the kids into what we can consider safe locations,” Stratton said. “When we compare our building to the old building, we’re talking about most of the kids are below ground level, which we never had the opportunity before.”

However, Debruin believes it’s difficult to get from Point A to Point B. “Everybody’s taking the same hallway to get down there, so it’s pretty loud and disorganized.”

Dowell believes that how the building conducts tornado drills has improved. “In the old building, I think we had three different rooms that my students could potentially be in, that were designated as rooms that had space for us,” Dowell said. “If I’m trying to keep track of students in the event of an actual tornado, they are in three different rooms. I have no idea of who’s there, who’s not. How do I take attendance?”

Now, Dowell takes her students from her classroom located in the 100s to the activity cages in the basement. “Yes, it’s quite a ways away but there’s also enough room,” Dowell said. “We’re not crammed in like smelly sardines. I’ve got my little sign, everybody knows where to come to to find me.”

Recently, when an unexpected fire alarm went off, staff and students all evacuated out onto the football field. Debruin believes the school needs to take into account how the DPAs impact evacuations. “Not a lot of teachers have a homeroom anymore so they don’t have their evacuation supplies with them all the time,” DeBruin said. “I saw a lot of people wandering around looking for teachers that didn’t have signs.”