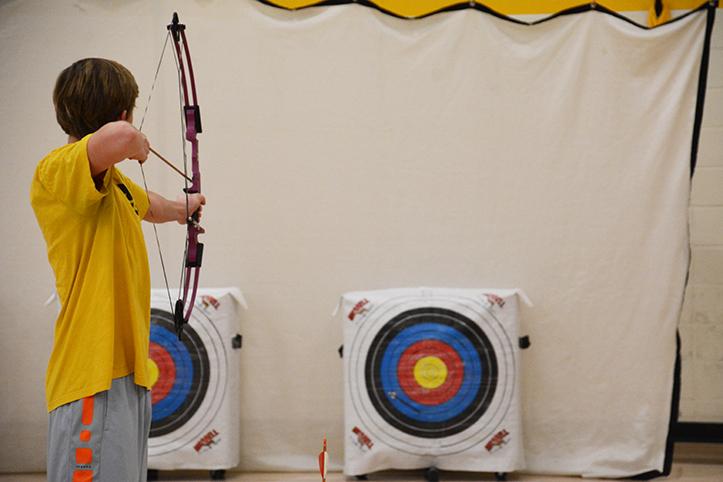 Sophomore Robby Chickering prepares to shoot an arrow at a target a few meters away during Track 2 P.E. Before Chickering and the rest of the class went up to shoot, Mennen gave instructions on whistle commands and how to shoot correctly.

When Dave Beason retired from his P.E. teacher position, Daniel Mennen was hired, bringing changes to Track 2 P.E. These changes include a new grading system with standards. In addition, Mennen’s Track 2 also has a written quiz over rules in each unit, or sport, the class covers.

One major change to Track 2 is the grading policy. With Mennen’s new system, certain things are now required to pass the class. One example Mennen gave was dressing out is mandatory, and not dressing out results in an automatic zero for the day. Mennen believes that problems like dressing out should of never been graded. “The old grading model allowed things to be graded that should not be, as they are more along the lines of  behavioral issues,” Mennen said.

Another change Mennen made was standards based grading. According to his Moodle page, there is no longer a point break down, but a letter grade system. For example, an “A” level grade shows that “Students consistently demonstrate ability to meet all daily practice criteria”. However a “C” level grade shows that “Students rarely demonstrate ability to meet daily practice criteria”. With this a letter will be issued as a score, instead of a point value. Instead of receiving a grade of “10/10” for daily work, the grade issued will be “A+”.

Along with daily work, there is also a written quiz. This is something Mennen refers to as a cognitive assessment, which is given on the iPad over the Socrative app. Mennen said that these quizzes are meant to re-enforce the rules of the game being played. “The biggest problem I observed with any game we played [last year] is that students don’t know the rules,” Mennen said. He hopes that students that know the rules will want to play more, even outside of class.

Such quizzes have came with much controversy. While Mennen points out that he provides a study guide and students can reassess on the quiz if they do poorly, students have not been so keen on the new changes.

Sophomore Howie Butler likes Track 2 overall, and enjoys the change from middle school PE. However, he has run into frustrations with the quizzes. “The questions are misleading and confusing to the answer, but other then that I really can’t complain,” Butler said. He also thinks that because of the addition of the quizzes, a higher credit should be issued for PE.

Other students that had Track 2 last year do not like the change. Senior Jared Boldridge is one one them. “[Track 2] was fun last year, it’s not anymore,” Boldridge said. He believes that the seemingly more intense workout might have an effect. “[Last year] was more chill, it was not as much try hard as it was this year,” Boldrige said. In terms of the assessments, Boldridge thinks that the quizzes are reasonable. “They are fair, I don’t study for them and that’s my fault,” Boldridge said.

The reactions from students to the change is noticeable from Brian Lutter, the other Track 2 P.E. instructor, who unlike Mennen, does not assess students in his classes. “I think the frustration is that we are raising expectations,” Lutter said. “PE in the past has not had that high expectations.” Lutter also believes that the assessments are being blown out of proportion, and students need to give this time. “I don’t think any teacher wanting to change expectations is a bad thing,” Lutter said.

Both Lutter and Mennen agree that P.E. is no different then other classes, in regards that assessments should track students learning. “Let’s say that I see or observe you in another class working on homework, but how do I know that you understand it?” Mennen said.

Lutter and Mennen also agree that a change is necessary to not just Track 2, but P.E. as a whole. With that, Mennen’s Track 2 serves as a pilot program, and nothing is set in stone. One thing they are not willing to do is to prevent change. “If we continue to do what we have always done, we will get the results in the past,” Lutter said.