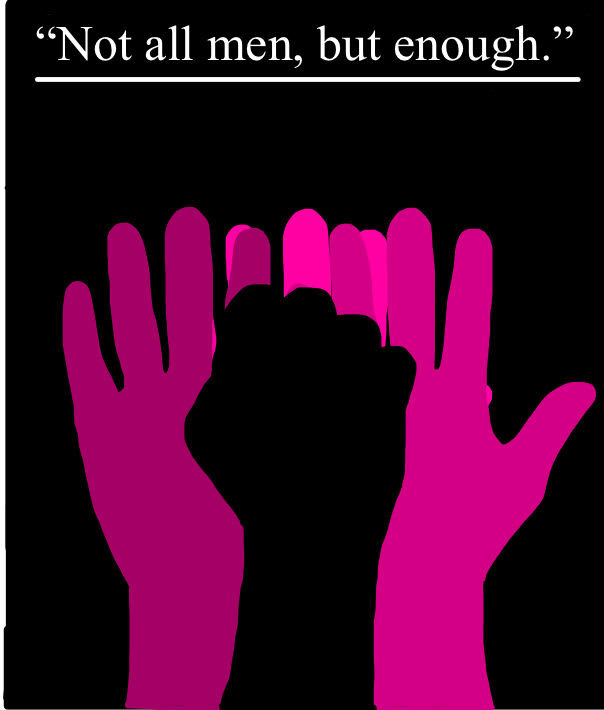 In 2006, women came together to raise awareness about the spreading of sexual abuse and assault in our society. This became the #MeToo movement, which has grown into a well known fight that has empowered women’s voices and experiences across the world. Although we have made our voices heard, there is still a long way to go until we as women can feel safe walking the streets alone at night, not having to clutch our keys tightly between two fingers as we make our way home, making sure to check under our cars before we get in them, and not having to think twice about if what we are wearing will cause us to be assaulted that day. These seem like every day things that we should not have to worry about, but to a woman these are the situations we have replayed in our minds over and over, hoping we will not ever become apart of the thousands of victims seen on the news.

Their shared experiences brought up both empowerment among women voicing their stories, and people who blamed women for their assault. Comments like “ you just need to dress more modestly” or “just change your behavior” and “ you were asking for it” puts the blame on women, when really the goal of preventing sexual harassment is on men.  This hate has lead to the trending hashtag #NotAllMen, which is the defensive response of many men when women voice their concerns of not being able to feel safe. “I would start by saying that, as women, we know not all men are rapists or predators,” Vivian Chen ’21 said. “We don’t need to be told that. It is, however, nearly all women who have experienced sexual harassment or abuse. If you saw a wasp or swarm of bees following you, the immediate reaction is fight or flight. Not all wasps and bees are out to sting you, but it’s hard to differentiate between which wasp will and won’t harm you, so you just assume all of them will. Likewise, a man might believe he himself won’t rape or harass a woman, but it would be difficult to tell from the prospective of a stranger, especially when they have been conditioned to be wary of men taking advantage of them.”

If we want to raise awareness about women’s sexual harassment, we need to start somewhere. Wether it is in the form of having a conversation with a family member, protesting the discrimination and disrespect of women’s bodies, or simply sharing an informative post on social media, every bit helps. Now, talking to family members about sexual harassment can be hard, but necessary. They might not understand your view right away, so that is why it is important to make sure your facts are reliable and strong. “There are tons of resources online, including the UN Women’s published report on sexual harassment that you can find on the internet,” Chen said. “There is an extensive list of anti- sexist books out there for education, as well as news articles, Ted Talks, videos, etc. I personally like to listen to podcasts, and BBC’s ‘Woman’s Hour’ is an excellent resource to educate yourself on global news items related to women’s issues.”

Taking 20 minutes a day to educate yourself about sexual harassment and the #MeToo movement can help you become a better advocate for yourself and others in your life. “I definitely think social media is a great way to educate anybody on stuff, especially this issue,” Jenna Westendorf  ’23 said. “And I also believe that having these conversations is helpful, especially with younger children so they understand and are comfortable with the topic.”

What to do when needing to report a sexual assault case-

Speak up! Coming forward about a sexual assault case can be difficult and scary, but Johnston has a wonderful team of officers, counselors, and staff members to help in any case. “I mostly just try to listen and help a student in any way I can, because the ultimate goal is we want all of our students to feel safe at school,” counselor Emma Heitritter said. “This is supposed to be a safe place and if something is happening that is causing a student to not feel safe at school, we want to know right away how can we fix that.”

“I think it’s a combination of hopefully building a relationship with the student prior, that they understand that it’s not their fault,” Erica Woods-Schmitz said. “That whatever has happened, it is not their fault. And there are long term components that we want to make sure we address and that the young lady or male feels as though they recognize that there are resources, and there are supports, and there is a moving forward and options other than just legal or mental health counseling, and that they aren’t alone in this and that hopefully the more we say it and the more kids that do come to us, hopefully the more we’re able to get that information out.”

Johnston makes sure students have as many resources as possible when it comes to cases involving sexual assault and harassment. Whether counselors help a student find a therapist through or outside of the school, they are there. “So usually from our standpoint it’s a conversation about what resources from a counseling standpoint we have, which are we have a list of outside therapists, we have a student assistance program, we have two licensed therapists here in the building for students who are unable to utilize outside resources,” Woods-Schmitz said. “So from a counseling standpoint we have that step, and of course we also have a school resource officer her in the building, and that they are welcomed and encouraged to talk with that school resource officer.” Remember to speak up, stay safe, and fight for women’s rights!