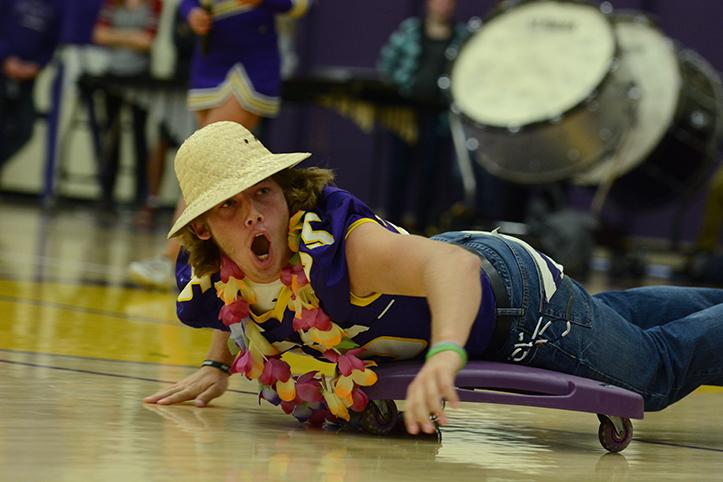 Senior Nolan Monthei yells at the crowd while rolling across the floor on a scooter to compete in the obstacle course. The pep assembly was right after third period Oct. 2 with homecoming festivities such as a teacher lip sync battle and obstacle course.

The homecoming pep assembly started off as usual; the band played the Johnston fight song, while the students were lead by the cheerleaders. Activities director Trent Wignall announced the winners for the various homecoming events. The seniors won the powderpuff game 36-0 and the winning Rock Around the Clock (RATC) team was midnight blue.

Later in the assembly, teachers and other staff split up into two teams and took turns trying to win the students over in a sort of dance-off. The purple team danced to “Can’t Touch this” by MC Hammer, “Shake It Off” by Taylor Swift and “Uptown Funk” by Mark Ronson. The Yellow team danced to “Ice Ice Baby” by Vanilla Ice, “Shut Up and Dance” by Walk the Moon and “All I Do Is Win” by DJ Khaled.

After, the varsity cheerleaders set up a relay race for a few of the football players. The events in the race included putting a cheer uniform on, dressing up for a luau, “swimming” down the basketball court, finding gumballs in tins full of whipped cream and shaking ping pong balls out of a tissue box. The two teams consisted of four players each. Team one took the win with Nolan Monthei, Tom Dusen, Tiano Wansley and Steven Williams. Team two included Tboy White, Jack Spear, Jordan Walley and Preston Arnold.