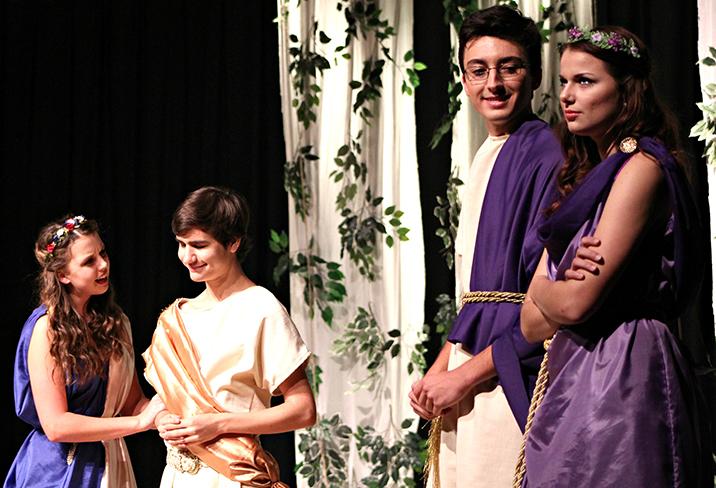 Helena (Lizzie Boeschen '17) and Demetrius (Ben Smaltic '17) listen to what Lysander (Will Linder '17) is trying to explain to Hermia (Nicole Hbson '17). 28 students performed in the play "A Midsummer Night's Dream," while four students assisted backstage as crew members.

Twenty-eight cast members performed Shakespeare’s “A Midsummer Night’s Dream” Oct. 28 and 29. Teacher Jeremy Fitzpatrick directed. The cast was made up of 14 seniors, seven juniors, five sophomores and one freshman. There were also four stage crew members.

When producing a play written by Shakespeare there is an extra challenge added to learning the lines. “It did indeed feel like learning an entirely new language,” Nic Ronkar ’17 said. “Memorizing lines was the hardest part of the production for sure.”

Stage crew also have to be prepared to handle anything that happens. “Night one Nic had forgot his headpiece when he went on in the second half so I had to run around and try to find it,” Cassidy Gabbert ’17 said. “It turned out he left it in the bathroom.”

The football playoff game, state cross country meets and regional swim meets all occurred at the same time as the play, which may have impacted viewer turnout.