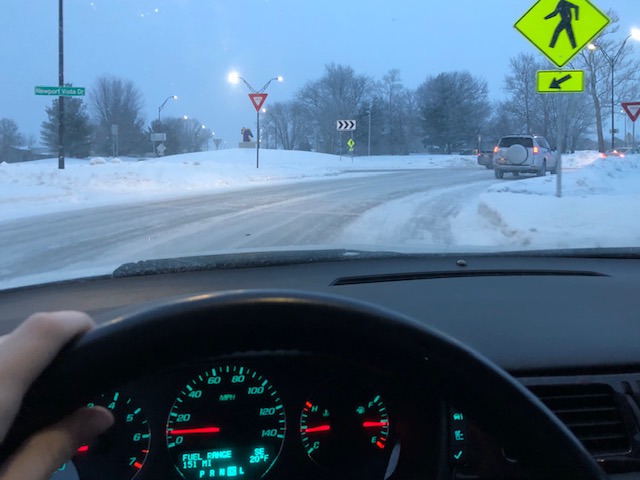 Me driving my car on the slick ice round-a-bout.

Recently, Johnston has been slammed with incoming snow and cold weather. Because of this, roads have to be plowed and salted to be driven on. But that comes with consequences. When all of the roads are laced with salt, it rusts out the under carriages of cars. This is always a complaint every year but never has a legitimate idea on how to get rid of the salt. In some places like Oklahoma and Colorado, instead of salting the roads they spread sand out. And with other states using this method, could be implicated into Johnston?

Road salt is mostly sodium chloride, which is the same stuff sprinkled on food, but in coarse granular form. Nathan Riggs, spokesperson for the state’s Department of Transportation in Indiana says that Indiana typically spends $33 million annually on road salt. And with this, Indiana’s weather is very similar to Iowa’s. In addition to corroding vehicles, sodium chloride kills vegetation, can draw deer and other animals to highways and may pollute streams. Alaska makes cost-effective and environmentally safe decisions when they respond to icy roads with potassium acetate. But it is more expensive than standard salt and could potentially be harmful to wildlife. And according to Caleb Dobbins, a highway engineer other substitutes can cost thirty times more and may still harm the environment. This is where sand comes in as an option.

Sand is the original winter maintenance material.  Sand is the first material that was used to help increase the friction of icy road surfaces in the winter before road salt was used.  In recent decades, though, sand has largely been replaced by chemical deicers like sodium chloride and magnesium chloride.  Sand is much more cost effective and is easier to obtain as well. This could be a great option to switch to because it will not erode cars from the bottom.

Head custodian Daniel Golbuff is in control of plowing the school parking lot. In Johnston, the city uses regular salt for the roads, and so does the school. “We get all of our parking lot materials from the city so what is used on the roads, is the same here at school,” Golbuff said. “I have not heard anything about using sand instead. What we use it just pure road salt.” The school will continue to use salt as long as the city does.

Many tests have been done, and chemical deicers have been found to be a lot more effective at restoring roads too safe friction levels after a snowstorm than sand. So the safest option is still salt for now. However, sand is still used for winter maintenance and there are instances where sand still makes sense.