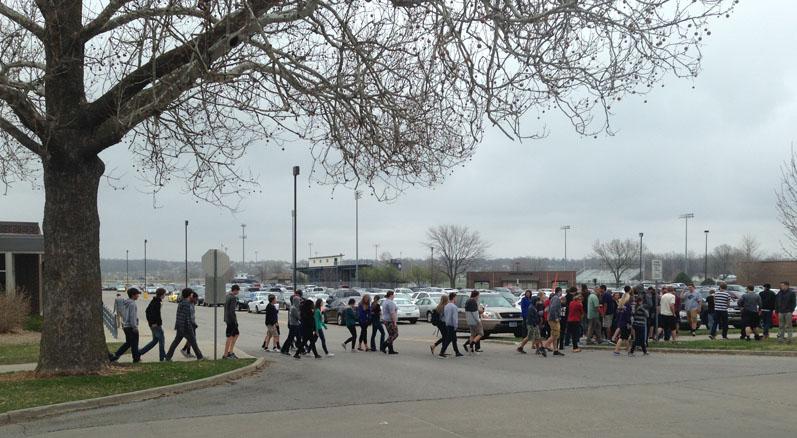 Students evacuate the building during a fire drill that occurred April 6 at 10:21am. This drill was a success, Associate Principal Jerry Stratton said, with an evacuation time of 2:47.

Each year, school districts are required to have safety drills to ensure that students and teachers know where to go in case of emergency. Despite what seems to be loose standards set by the state, school administrators and teachers take these drills very seriously. However, there have been some concerns of organization.

Schools in Iowa are required to have two drills of each type of emergency. These include include fire, tornado and intruder/lockdown drills each semester, to associate principal Jerry Stratton said. The requirements of the drills, as far as the state is concerned, ends there. Stratton mentioned that state regulations do not require the drills to be completed in a certain amount of time. In other words, there is no real pass or fail for drills set by the state.

Even with the seemingly loose regulations, Stratton holds high standards for the high school. One of the things done by administration is recording times. This idea that districts have to hold accountability was stressed by Stratton, stating that whatever problems occur should be discussed and corrected. “If we had a drill that takes 10 minutes, we are failing miserably,” Stratton said. If that were to happen the school would not necessarily do a drill over, but discuss with teachers of what went wrong, and how to correct it.

Times of drills are not the only thing that administration looks at. “I remember my first year here, and [during a lock down drill] I did not have my door locked,” English teacher Elizabeth Johnson said. “At the next faculty meeting we basically got our hands slapped. [Administration] said that we did not do this right, and we basically lost the lives of our students.”

Johnson sees some small problems with certain drills, such as not being sure where there supposed to go every time. “The last torando drill I was in the LMC, and I had no idea where to go,” Johnson said.

Senior Alexandra May had a similar issue. “The last tornado drill, I had P.E. that period, and no one told us were to go, so there were just bunch of kids sitting in the gym,” May said. The teacher at the time was not in the class yet. “Mr. Stratton opened the door and told us to go to the boys locker room,” she said.

Another problem that Johnson said she has is how seriously students take it. “It’s hard to practice something with so much terror and confusion,” she said.

Johnson, who used to work with Chicago Public Schools, said that drills are far more effective here than in Chicago. “I have no faith that the drills we had in Chicago would help our survival,” she said.

Overall, people have few objections to how the drills are done. Stratton said that the tornado drill held March 24, fire drill held April 6 and the lockdown drill April 10 were made in a reasonable amount of time.