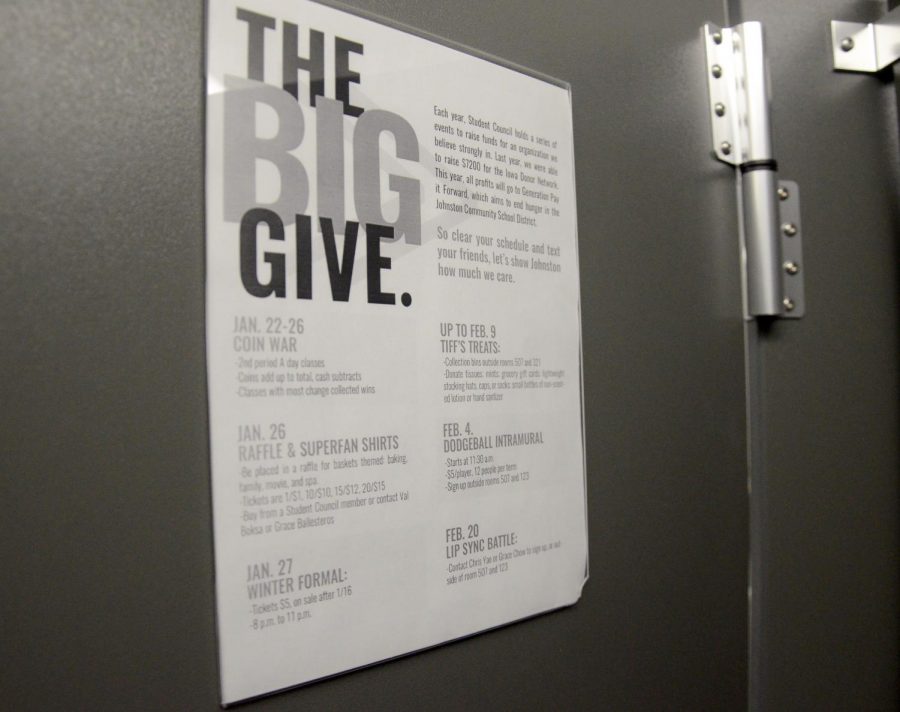 Flyer advertising Coin War, Winter Formal, Tiff's Treats, and other events hangs in the bathroom stalls. Student Council has had to put up flyers in the stalls due to their inability to hang posters.

Most of the school activities are developed and carried out by Student Council. They host events like Homecoming, Winter Formal, Big Give, and Coin Wars. Lately Kari Gray, Student Council sponsor, has voiced some concerns about the event results from this current year. “[I’m] super disappointed because unfortunately, this year, I’ve seen super low attendance and super low motivation,” Gray said. “Super low numbers of seniors getting involved and they are kind of the leaders of the school, so usually if seniors get involved then the underclassmen get involved.”

Additionally, Gray mentions that this is the first year the school had to cancel an event, let alone two. The two events are the dodge ball tournament and the lip-sync battle. The dodge ball tournament was originally planned to take place on Feb. 4 and later March 4, but because of the low attendance, the Student Council had to postpone the event and hope they will get more participants for the newly-dated tournament on April 15.

Unlike the dodge ball tournament, the lip-sync battle barely gained any participation, resulting in a complete cancellation of the event. “We were down to two acts which I would love for them to have performed, but it is something to raise money and we just didn’t feel right about charging an admission to something that was only going to be two acts long,” Gray said. “So unfortunately we have to make those decisions and it does affect those kids who do want to do it.”

After sending out a poll to the student body, several results came back offering explanations as to why participation has dropped. For one, most of the students mentioned that their interest were just not piqued by the activities. “Well one, it doesn’t appeal to me,” Willow Applegate ’20 said. “I’m not really into playing dodge ball, and I’m not really into competing in a lip-sync battle kind of thing.”

Other students say that they think the activities are boring or unappealing mainly because of the absence of their friends.

While some students are not participating because it does not appeal to them, others do not because they are too busy from school work or family business. Students receive homework on a daily basis; and unfortunately do not have any extra time to participate in the school activities, especially if they also have outside-of-school activities. Josh Hendrickson ’19 said his schedule is packed due to participation in several music ensembles for band and choir. He is also heavily involved in his church which leaves him time to only attend football games and school dances.

Although the issue doesn’t fully fall on the student’s shoulders, the lack of advertisement availability and information given on the school activities leaves many students open to confusion and feeling lack of motivation. “We are not suppose to hang things outside and we are not suppose to have posters,” Gray said. “Last year, Mrs. Marckmann used to be able to give announcements and that no longer is something we are able to do.”

Students have mentioned the negative effects of the limit of advertisement. “I feel like it doesn’t get word spread around until it’s like ‘hurry, sign up before it’s too late’ kind of thing,” Applegate said. Additionally, students do not feel compelled to participate because of the small information they have on the fundraiser and what it’s supporting.

While there are several problems that contribute to the lack of participation in the school activities, both students and teachers have suggested many possible solutions to help everyone get more involved.

For the lack of advertisement availability, several students have suggested teachers and Student Council members voice the activities more often and give their own motivation to take place for the reduced advertisement. “Mrs. Robilliard didn’t really like make it fun, but I guess she challenged us more,” Applegate said. “She was kind of like ‘You know, I’ve never not won so you guys got to do me good or I’m gonna be really sad.’ She just challenged us and we just tried to make her proud.”

As for the lack of interests students have for the activities, World Studies teacher Dale De Jong suggested possibly adding an activity to the fundraisers that would catch the student’s attention. “I think a sad reality of the world is that in order to raise money you have to have: one, a good cause and two, kind of a fun activity to do it with,” De Jong said. “I think maybe why the coin war doesn’t always work is because some people don’t buy into the fun of that, but Dave [Oldham] and I did.”

De Jong and Chemistry teacher Dave Oldham incorporated their own fun activity by making their classes compete. With the fun activity in play, De Jong raised $107.83 and Oldham raised $869.27.

Student Council continues to try to work their way around the several problems by asking students for their opinions, along with other things; but as Gray said, “We’ve had some really good positives; but unfortunately right now, we’re dealing with the negatives and how to make them better.”