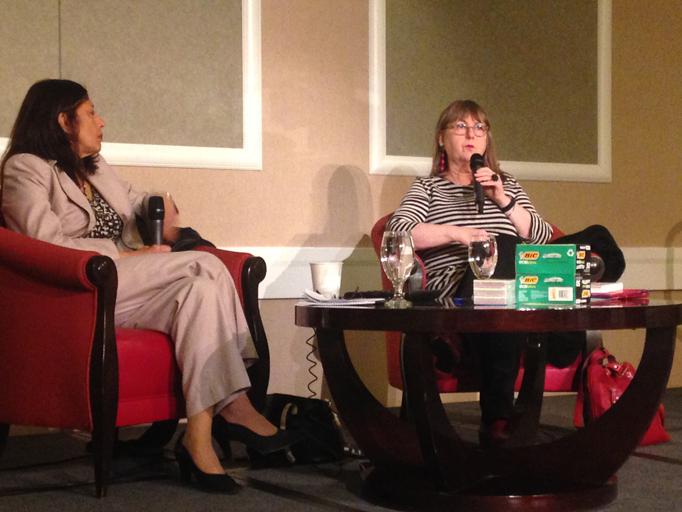 Des Moines Register columnist Rekha Basu moderates a question and answer session with former journalist and current novelist Jónína Leósdóttir of Iceland. The two spoke on Leósdóttir's experiences around the world and her writing.

Seven GSA members travelled to the 10th annual school safety conference on LGBTQ+ youth April 3. The conference was held at the event and conference center at Prairie Meadows in Altoona. Speakers included many people prominent in the LGBTQ+ community and LGBTQ+ youth today.

The conference was broken into four different sessions, each being 45 minutes long. Workshops were focused on different topics, such as sexual education, the importance of advocacy, bullying, suicide and politics and law. The two sessions for the opening and closing of the conference were both an hour long.

Young was the first speaker to start the conference off. He spoke about how he announced he was gay in 2013 to TMZ, about the feedback he got from WWE, his family and his friends, and how they were all positive. In addition to the conference, he has spoke at other events as a LGBTQ+ activist. During his time speaking, he held an online question and answer with the hashtag #AskDarren. One question on Twitter asked him how to deal with bullying from homophobic and/or transphobic people. “If they don’t know you personally, don’t take it personally,” Young said in the response.

At a session titled, “What’s Next: A Conversation with Abbe Land,” Land and Tammy Wawro, president of the Iowa State Education Association, talked about support systems and lifelines for LGBTQ+ youth, such as The Trevor Project, if they find themselves in need of such things. The Trevor Project was founded in 1998 after the producers of a short film titled “Trevor” decided to create a support system for suicidal LGBTQ+ youth.

Land also shared statistics on lesbian, gay and bisexual youth in schools and how they are twice as likely than their heterosexual peers to be bullied. Wawro and Land also spoke about what students and administrators can do in their schools to promote a safe environment for LGBTQ+ students, like hanging up “safe place” stickers.

At another session, Calla Rongerude, LGBTQ+ communications and public relations strategist, spoke on the power of storytelling. During that 45 minutes, numerous students, school administrators and even church ministers stepped up and spoke on personal experiences and about why they think it is important to support the LGBTQ+ community.

One school principal teared up while sharing her story, and one Methodist minister used the chance to publicly apologize to the LGBTQ+ community for being misunderstanding and discriminatory back when he use to teach school in the 1970s. “Nothing changes hearts and minds like an LGBTQ person sharing their story,” Rongerude said during the session.

During the lunch break, Sigurðardóttir gave a speech on what it was like to be the prime minister of Iceland and how it affected her personal life. Upon meeting at a politics committee meeting in 1984, she and Leósdóttir began a secret relationship. The two were both married to men at the time and had children of their own. Over the course of 15 years, the two spent the weekends at each other’s homes and kept their relationship private. It was not until 2010 that they were able to marry, 31 years later after meeting for the first time. Sigurðardóttir spoke of the conditions for LGBTQ+ people in Africa and Russia where they are still legally able to be force into slavery or exile because of their sexuality. “I am what I am and what I am needs no excuses,” Sigurðardóttir said to close her speech.

At a follow up session, Leósdóttir took part in a question and answer session, moderated by Des Moines Register columnist Rekha Basu. Students and school administrators from across the state took part. Questions were asked about how their ex-husbands and children reacted to their relationship, about her books and plays and if she knew she was attracted to women before meeting Sigurðardóttir. Leósdóttir explained that she does not believe in labels for her sexuality. “I was very happy with [my husband],” Leósdóttir said. “It’s not a choice who you fall in love with.”

Later in the day, Laramie Project specialist and employee for the Matthew Shepard Foundation Susan Burk. “The Laramie Project”, a play recreating the events that took place in Laramie, Wyoming, and the Matthew Shepard Foundation, founded by Judy and Dennis Shepard, were started in honor of Matthew Shepard, a gay man who was beaten, tied to a fence and left to die because of his sexuality in 1998. Shepard died six days later at Poudre Valley Hospital, in Fort Collins, Colorado. While gaining worldwide attention, Shepard’s death also gained worldwide donations in a fund to support his parents, Judy and Dennis. “Little kids were emptying their piggy banks,” Burk said at the session.

Since Shepard’s death, the The Laramie Project and Matthew Shepard Foundation have spread their message of the events of took place and the end for hate crimes. “The Laramie Project” is continued to be directed and played in high schools and colleges across the country, and the Matthew Shepard Foundation offers advocacy programs, support systems, and scholarships to help future LGBTQ youth.

At the closing session, Byard and Peru took to the stage. Byard delivered a speech on why she believes it is important for current LGBTQ+ youth to fight for a “better” future for the community. Following her, Peru sang three songs, all three of which repeatedly make the room erupt in laughter. Iowa Safe Schools’ 10th annual school safety conference on LGBTQ youth brought in speakers from all across the world who spread their messages to student and administration from across the state. “One of my goals was to create a world for younger people would feel safe being exactly who they are,” Peru said during her speech. “You will create a better and beautiful world.”