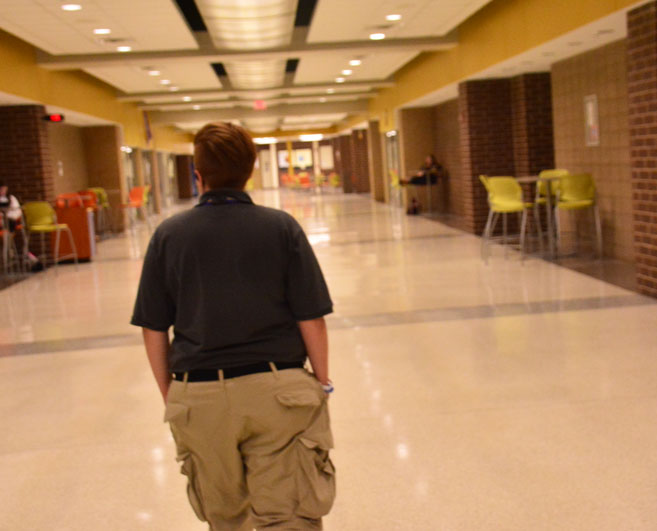 Erin Kohlsdorf, the new school security officer, patrols the hallways of the school. She looks forward to forming relationships with the students and staff through her job.

A new face now occupies the desk right by the commons doors and is often spotted by the main doors, catching a few students eyes. Erin Kohlsdorf, the new security officer, happens to play a role in student and staff safety.

“I haven’t had any interactions with her really,” senior Taylor Boysen said. “She’s stared me down a few times for being late, but that’s it.”

Fellow senior Austin Russ also does not really understand what her job description entails or who the unfamiliar face happens to be.

“I haven’t ever talked to her,” senior Austin Russ said.

Like Russ and Boysen some students think that Kohlsdorf is only there to check ID’s at the beginning of the day. However there is much more to the job than that.

Checking ID’s and letting people into the school is Kohlsdorf’s main duty. From 7:15-9:30, she sits at the door in front of the commons and makes sure that everyone entering the school is either a staff member or student. After that she patrols the hallways and checks that the exterior doors are locked. During the last 15 minutes of the lunch hour, she checks ID’s at the commons doors for seniors who went out for lunch.

“I just want to make sure that it’s a safe place for students to come,” Kohlsdorf said.

She is the replacement for Chris Rye, the school security officer that started the position second semester of the 2014-2015 school year. Chris took an assignment elsewhere, but still works with PerMar. PerMar is the security company the school has a contract with.

Kohlsdorf recently graduated from UNI with a degree in criminology and looks to move up in the security field. “I’d like to go into security but maybe more security management. It’s more like writing procedures instead of walking around and actually doing it,” She said.

Kohlsdorf appreciates the new job and enjoys being able to interact with the students. “I just love getting to know the students and staff,” she said. She also appreciates how kind they have acted towards her. “I haven’t really had any problems or confrontations,” Kohlsdorf said. “I think they just like not having to wear the lanyards.”

“I’ve talked to her daily to see how things are going, and she’s typically smiling,” Principal Ryan Woods said. “I think the students understand that she’s here to keep them safe, so I’m hopeful that those interactions should be positive.”

Although most students have been easy and rule-abiding, there are always the few that make her job a little more interesting. “I had a student prop a door open with a Nike Free shoe, and then they came walking into the office with just one shoe on to get their shoe back.” Kohlsdorf said. She estimates that there have been about 20 doors left open this year.