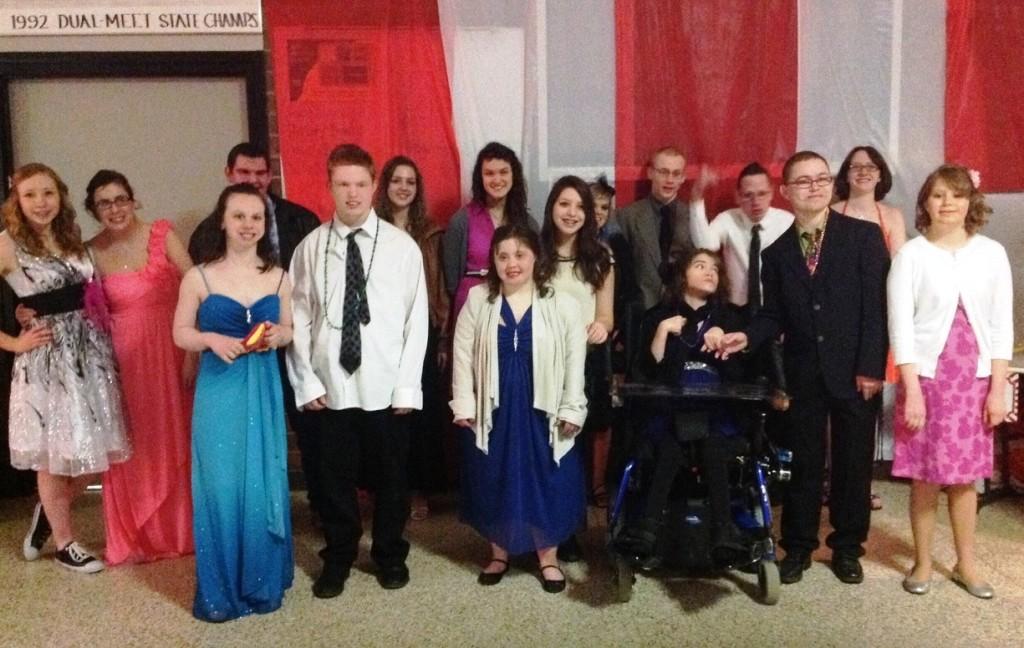 Students attending Best Buddies prom gather for a group picture. The prom was held at Dowling High School on Sat. March 9. "Prom was fantastic this year," Best Buddies president Callie Coulter said. "The theme was "A Night at the Carnival," so there was dancing, games, and carnival-themed food."

Alum and pageant queen Jessica Pray presented crowns and sashes to seniors Patrick Holz and Tori Calhoun after they were named the Johnston prom king and queen at the Best Buddies prom March 9. A king and queen were named from each school attending.

About 12 schools participated in the event , mostly from the CIML. 400 people attended the prom, held at Dowling High School.

Best Buddies is an organization designed to create opportunities for one-to-one friendships for people with intellectual and developmental disabilities. High schools from all over Iowa participate in the organization. President of Best Buddies, junior Callie Coulter, joined Best Buddies her sophomore year. “I think the movement to include people with disabilities is not just a fluffy, nice cause to raise awareness for,” Coulter said. “I think it is a justice to fight for.”

Coulter was part of the committee to nominate the king and queen. “I nominated Patrick and Tori for prom king and queen because they have good attendance to Best Buddies events, and are committed in their Best Buddies match,” Coulter said. “I know Patrick was particularly excited because his birthday was the following Monday.”

Everyone attending the prom sang to Holz for his birthday. “It was cool and I was happy when they sang to me,” Holz said. “I liked being king with Tori because she’s a good friend.”

Coulter had a great time at prom, saying it was a huge success. “Events like Best Buddies prom give students a chance to let go of their worries for a night, and just have fun with friends,” Coulter said.