The Black & White • May 10, 2017 • https://jhsblackandwhite.com/shimanami-tasogare-symbolistic-imagery/ 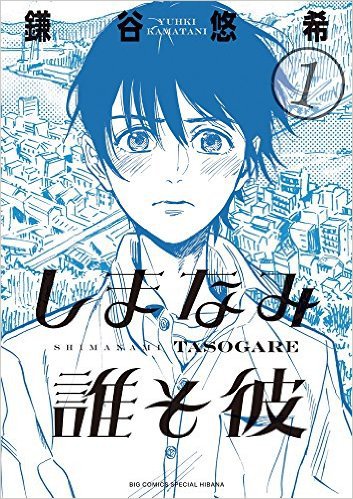 This manga was different from what I had been expecting. From it’s description, I could gather that the main character identified as gay, and was being helped through living in a homophobic town by an adult female. What I wasn’t expecting was it to encompass far more of the LGBTQ+ spectrum the way that it did.

Shimanami Tasogare is a short manga about a boy named Tasuku Kaname who has recently moved to a new high school. A classmate became convinced that Kaname was gay, and thus told the entire class. Kaname hadn’t known what to do, and so rejected everything the kid said in hopes of everyone forgetting about what happened. At the end of the day, he didn’t believe he’d be able to go to school anymore and planned to jump off a bridge. Just before he did, a woman jumped out of the window of a nearby house and Kaname went to see if she was alright, forgetting about his own plan.

What he discovered was a lounge filled with random items and people of all ages relaxing. Kaname tells them what he saw, and none of them were surprised or panicking, explaining that it was just the owner of the house leaving for her walk. The owner reenters the house later, and Kaname is still there. She noted that he didn’t follow through with his plan, and said that if Kaname ever wanted to talk, she would listen.

It is in this woman’s presence, in a room separate from the other people, that Kaname admits to himself that he is gay. The woman gave him a kind smile before continuing with her task. After Kaname returned to the lounge, the people there said he could come back any time to talk. We later discover that many of the people in the lounge identify as a part of the LGBTQ+ specter, though we haven’t discovered everyone’s thoughts.

Besides the LGBTQ+ appeal with this manga, I love the symbolism they scatter throughout the pages. No one’s past is clearly reviled, but the thoughts portrayed in the moment are done artfully and well thought out. For example, the people in the lounge work to restore old and vacant houses. One member of the group started with the idea of being able to break past her old life, emphasized by breaking through an old and rotting wall, to create a new and happier future with her girlfriend. Kaname follows her lead, but starts small with steady progress. His tool is a crow bar, pulling out the wall’s nails.

Shimanami Tasogare shows the fear of those still ‘in the closet’ as well as the hope of being able to express themselves and the acceptance from people outside of LGBTQ+. It also shows how hard it can be for people of all ages to accept who they are. This manga isn’t drawing its readers into angst or showing horrible scenarios and creating a sob-story for the readers, and even within the first couple of chapters there is a large amount of character development as they learn to accept in a natural process.

It also isn’t trying to grab attention by showing anything extreme in one way or the other. The main character does hide his preference from his school, but the people at the lounge know what he thinks and who he likes. He seems to be an innocent child that only wants to understand himself and the people around him.

For many manga, they go about showing an extreme attraction, where the main character will stare at their crush for hours and embaress themselves around the crush. Since this manga doesn’t follow the same setup, the continues with a more serious note.

Another stereotype Shimanami Tasogare breaks is the amount of in depth mental trauma. Even though the manga shows symbolisum, such as character breaking apart when a certain word is mentioned, we dont see much in the way of bullying or rejection from family.

I give this manga a 8/10, since it is a well-paced manga with good meanings, but I haven’t been able to discover what the ‘goal’ of the manga is. My absolute favorite part of the entire series is the symbolism that clearly shows each character’s thinking.