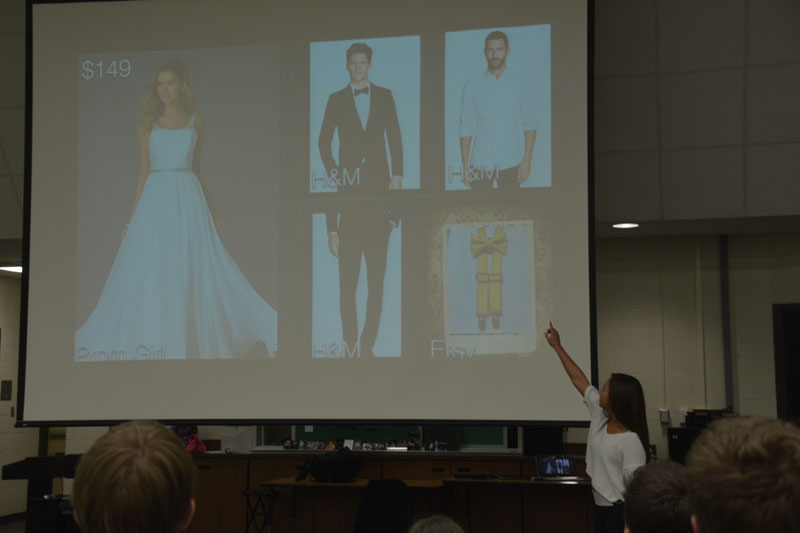 Senior Michaela Davis gestures to the projection screen, where the costumes she selected for her show choir project are displayed. As part of the annual project, students have to create their own show choir show, complete with music, themes, and costumes.

Senior and Innovation member Elliot Suiter is working to construct a show choir show that may be among the strangest the show choir world has ever seen. “My show as a senior is a Spongebob-themed show choir,” Suiter said.  “My students will be dressed as pirates and will be singing and dancing to various tunes of Spongebob.”

While most show choir students will not create a show quite like Suiter’s, every student must work either individually or in pairs to create an entire show choir show from top to bottom. Each show will be complete with costumes, music and what the band would be like to fit within a $450 budget for Innovation and $350 budget for Synergy.  “It’s fun especially when we don’t have anything to do the rest of the year because it’s not like we’re practicing for competitions or anything,” senior and Innovation member Courtney Mithelman said. “The project can definitely be time consuming, but if you know what you’re doing it shouldn’t take too long.”

Synergy director Samantha Robilliard has been doing this project with her show choir students ever since she came to the high school three years ago. “The kids need to come up with their own show choir show where they make an iMovie or a PowerPoint or some other way to present an entire show choir show to the class,” Robilliard said. “It has to be at least five songs, and they have to say who their choreographers will be and why they picked that choreographer. They select a few competitions that their choir will be going to and reasons why they picked those competitions.

What some students enjoy most about the show is choosing the songs. “There are songs that I hear throughout the year and I think that it would be a good show choir song,” Mithelman said. “For example, Florence & the Machine songs are good for show choir because they have a lot of different types of instruments in them.”

Sophomore and Synergy member Peter Beebe wants to create a show for his project that includes content that is relatable to high school students. “I thought about doing a theme that ties into high school life because we’re all in high school, so something that we can all easily connect to,” Beebe said. “Throughout the year, we have to connect to every song we sing. So it would be easier if I did a song that people can easily connect through.”

Another important part of this project is for the instructors to find an idea for what kind of music the students want to head in their shows. “The directors will take some people’s ideas into account, and maybe even make them a song in the real show,” Mithelman said.  “I did a song in my show a couple years ago that they actually did in the girl’s song this year for Synergy. It’s also a way for directors to find different music that we listen to and we think would be cool, so we can expose them to some other music.”

Robilliard agrees and thinks that the different songs and themes the students select help her in knowing what the students want. “That’s what’s so great for me is it helps me keep connected with what this age group,” Robilliard said. “As I’m getting older, I’m becoming more out of touch with what kids are liking as well. For example, I knew Florence & the Machine, but two years ago almost every other project had one of her songs in it. So it made me really listen and think if I wanted to add one of her songs to a show, which I ended up doing last year.”

Last year, Synergy used a theme that was an idea from senior Abby Gorsche’s show choir project. Gorsche had the idea of the show going from dark to light, which was incorporated into Synergy’s show last year. “A couple of the songs I had picked would fit into that show, so that was helpful for me to pick out the rest of my show and costumes,” Robilliard said. “The great thing about kids, Johnston kids in particular, is that they’re very creative and very intelligent. They have really good ideas, which is helpful for me.”

Overall, the project has many benefits to the students. “Why I think this project is great is that we will have people who will end up going or at least are interested into going into music as well,” Robilliard said. “We also have students that will help other show choirs after they have graduated, and it is very applicable to when they leave here as well, it will carry on with them.”