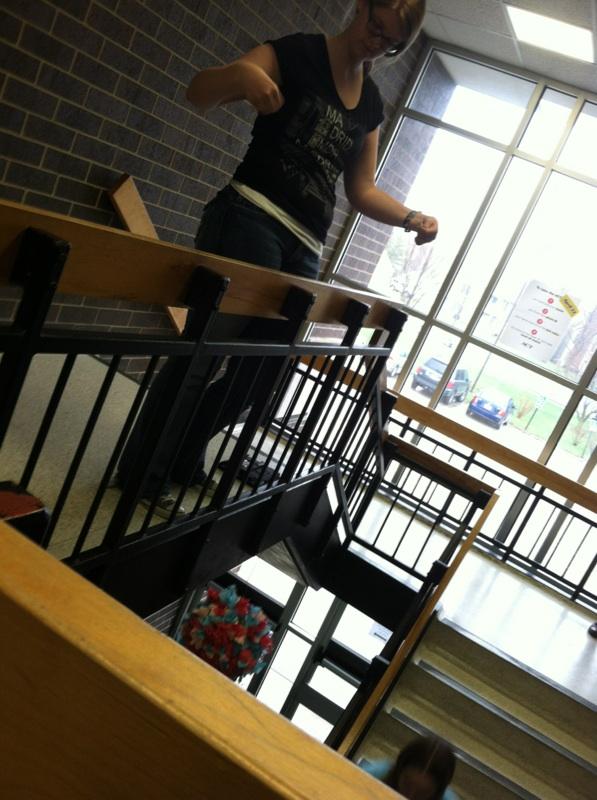 Holding senior Allison Clark's pinata by a string, senior Erin Conlan slowly lowers the pinata down to the floor below, where Clark is waiting to smash it. Clark destroyed her pinata with one swing.

Members of the Spanish club smashed four piñatas April 10. The members made the piñatas at a previous meeting soon after the winter holidays. Since then, the piñatas had been stored in the display case outside Spanish teacher and club adviser Angela Koob’s room, until the meeting.

Piñatas were smashed by someone standing at the top of the staircase and dangling them down to another student on the floor below.

Senior Erin Conlan made one piñata in the shape of a taco using wire. “I randomly decided the night before the piñata meeting that I wanted to make a taco,” she said. “So I ran into my garage and pulled out any wire that I could find. This was around 10:00 at night when I made this decision. My parents weren’t too happy. I was up until 2:00 but finished with just a few cuts as souvenirs.”

The taco piñata is currently sitting in Conlan’s room waiting to be decorated. She hopes it will be completed before she graduates as she considers it her way of leaving a mark on the school.