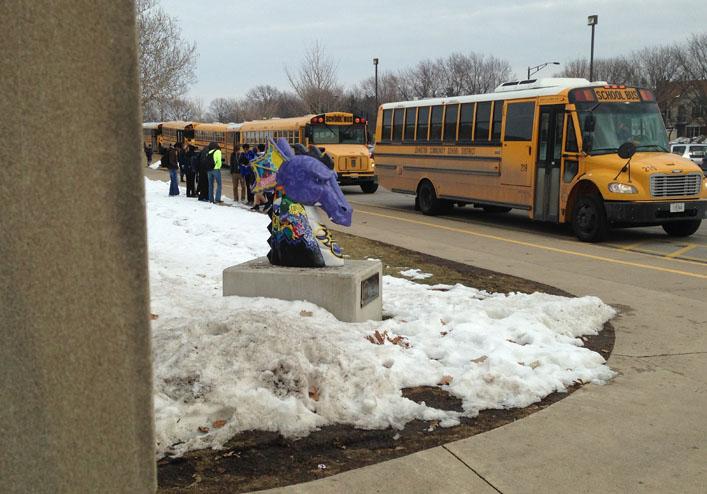 Buses line up in front of the high school to take students home after school Feb. 10. Given the state's inspections these buses are safe to travel on.

According to public records, of the 78 buses in the district inspected by the state during the first semester in 2013, five had severe violations that required them to be taken off the road for repairs immediately. State inspectors found 82 minor violations (30-day repair), or about one violation per bus.

Max Christensen, Executive Officer of Bureau of Finance, Facilities, Operation and Transportation Services for the Iowa Department of Education, said in an email interview that every six months, once per semester, school buses from all districts in Iowa are inspected by the Iowa Board of Education, with some help from the Iowa State Patrol. The inspections are divided into three main categories: notes, 30-day repair and out-of-service.

The notes category includes items to be aware of. For example, if the tread on a tire was getting to close to the minimum requirement, it would still pass inspection. However, the note would remind the district that the tire will become a problem if not replaced soon.

The 30-day violation requires an item to be fixed within a month. The bus can remain in service.

Christensen said that there is no such thing as  an average inspection, some pass, some fail. “If there were such a thing as an ‘average’ inspection, it likely would be a bus with several 30-day repair items that would not be major safety concerns,” Christensen said.

Inspections themselves are fairly extensive. Christensen Discussed what is inspected. “The inspectors look at everything on the bus – seats, tires, brakes, bodywork, mirrors, windows, heaters, defrosters, doors, wheels, suspension, drive line, etc.,” Christensen said. “The process involves the inspector actually crawling underneath the vehicles to inspect items as well as walking around the vehicle and inside the vehicle.”

Denise Johnson, Director of Transportation for the district said the district’s buses are safe. “They (the violations) are pretty common, it can be something like a turn signal or something of that matter,” she said.

Students did not see problems with the actual buses, but with other aspects. Sophomore Dheepak Nalluri said he has never seen something mechanically wrong with the buses. He was more concerned with the driving of one of his bus drivers. “Sometimes they won’t even look down when they go around the round about,” Nalluri said.

Problems with bus drivers were heard from other students. Sophomore Bobby Bailey said, “The buses are safe. The drivers, not so much.” He added that one driver routinely hits the curb and last year hit an ice patch and slid about 10 feet. However, Bailey said both problems occurred with same bus driver, and those where the only two times he saw problems.

Johnson did not respond to calls made by the “Black and White” about driver ability.

Christensen said all bus drivers must pass a physical inspection given by the Department of Transportation every two years, take three hours of in-service training every year and have the appropriate license to drive the vehicle.

He added that there are few problems heard from parents. “We actually hear very few complaints, he said. “Especially if you consider how many buses are operating in the state and the number of miles they cover, the percentage would be extremely low.”