The Black & White • May 20, 2016 • https://jhsblackandwhite.com/student-council-creates-new-constitution/ 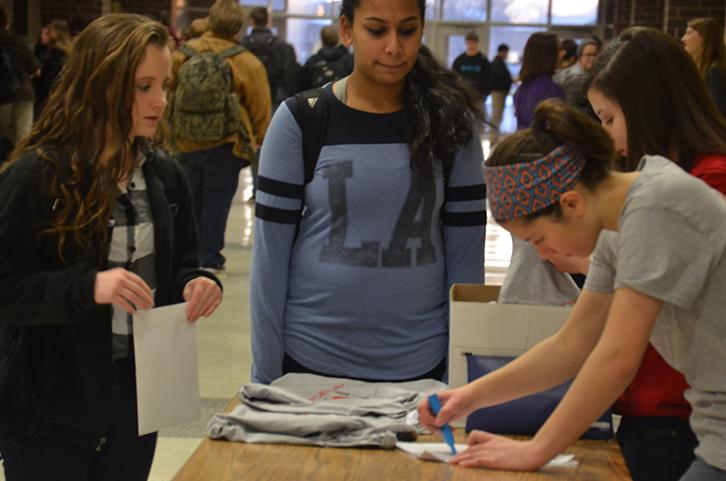 Helping out senior Sabaritha Chander seniors Lauren and Becca McDowell look for Big Give shirts. The Big Event is one event that is held by student council.

Student Council ratified a new constitution April 24 to take effect for the 2016-2017 school year. These changes were made for a variety of reasons in order to improve several student council procedures. “I’m hoping (these changes) will streamline everything in the future,” Student Council Advisor Kari Gray said. “If we need to change things, we will as we go.”

In order to change the Constitution, the student council created a committee to draft the necessary amendments. Then, the changes were voted on by the officers. In order to pass, 2/3 of the officers had to agree to the changes. “All of the student council members agree with these changes because they know they were necessary,”Student Council Secretary Bernardo Duarte said.

Prior to the changes, the student council encountered many problems when it came to upholding the Constitution. “We knew most of our students were not reading (the Constitution), thereby not abiding by it,” Gray said.

Many members of student council were also frustrated with the lack of involvement from some students. “These changes were made because we had to find a way to get people to participate more in student council instead of just showing up to meetings, but not helping in events,” Duarte said.

The Constitution was also changed since Student Council began collaborating with other school districts. “(We made these changes) because we visited Ankeny Centennial and tried to model our new council after them,” Student Council vice president Meredith Campidilli said.

One of the changes made was the elimination of the class officer position. Although some students expressed interest in the position to put on college applications, they typically did not have any responsibilities. “They didn’t really do anything for that particular position,” Gray said. “They were just voted on that, and unfortunately it’s usually a popularity contest.”

The new Student Council Constitution also amends the existing attendance policy. Previously, members were given four absences and automatically removed from student council after their fifth absence. The member could then appeal to regain their position, however this meant that all students with five absences would have to undergo an appeal process.

The new policy is a strike policy. A strike could include anything from not fulfilling a committee assignment to excessive amounts of absences from meetings. “Every one of those strikes will come with a conversation with the executive board and that student so it’s going to be an appeal process as we go rather than going backwards,” Gray said.

These changes were made to maintain the integrity of the officer positions. “You’ll notice that most of our students don’t pay attention to the speeches,” Gray said. “Their attention span kind of wanders off, but we really want to make sure we have the strongest team that we can.”