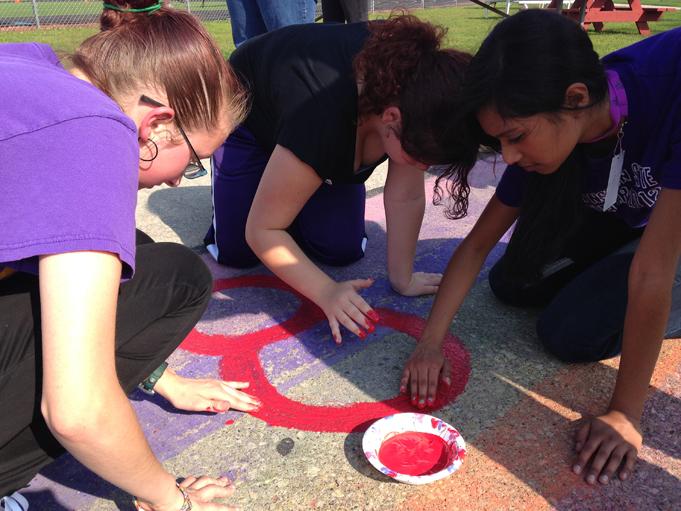 What happened late at night Sept. 25 and continued into the early morning of Sept. 26 has been talked about a lot by administration and the student body. It has been on the announcements several times. It is known that students trespassed into the press box, tipped over two porta-potties and graffitied the school buildings, but it did not cover the one thing that I found to be the most disrespectful; the vandalism on the Gay/Straight Alliance’s stadium painting.

As student president of the Gay/Straight Alliance club, I have to say what was done to our stadium painting was terrible. It was rude, disrespectful, and showed the community that Johnston is not as perfect as they thought. I have heard and still hear people saying the club is a dumb idea and that it is not needed. “The vandalism that was on our painting is a perfect reason why we need the GSA,” GSA vice-president Maddie Stoen said. “There are so many people against LGBT people. We need to try and change that, to make the kids that are LGBT feel safe going to school.”

To all the students and even some teachers that I have heard say the GSA is not needed, listen now. What happened Thursday and Friday was not just vandalism. That was not just students being stupid. It was an act of hate and mockery.

It is 2014 and American society has progressed since the 1969 Stonewall riots in New York City. It is completely OK to have personal beliefs and to not believe in same-sex marriage, but what is not OK is to go and around spreading hate and bigotry and passing it off as a joke.

People that believe spray-painting two male genitalia facing each other on a painting that supports LGBT students is the reason that we as a whole can not move forward. If just one had just been painted on the GSA painting, I would not have taken as much offense to it. But the fact that it was two hit me a bit harder. Because it was two instead of one, it came across as a personal attack.

None of what happened was called for, but I especially think that the mockery of the GSA and all LGBT students was one of the worst things to happen that night. Actually, the vandalism on the GSA’s painting was not only vandalism, but also a hate crime according to Iowa Code 729A. A hate crime does not have to be physical, it can be a spray-painting of two male genitalia on a painting supporting LGBT students because it clearly shows hate towards the gay community.

But amongst what happened, I was exposed to people who also felt terrible about what happened. I had students that were not even members of the GSA club making sure I was okay. A few even came Friday, Sept. 26 after school to help repaint the GSA painting. “I was outraged and couldn’t get it off my mind,” senior Lexi Williams said. “I couldn’t believe that someone would even think of being that disrespectful and immature to a club that is only trying to make everyone feel safe.”

Like I said before, I would not have cared as much if it was just one male genitalia  spray-painted on. But since it was obviously a statement making fun of the LGBT community, I decided to fight back. It was a testimony to show the people that tried to beat us down that we are better than that, so we took action. Thanks to administrators and Student Council adviser Kari Gray, we were able to repaint the GSA’s painting, and added the phrase “NO H8” and handprints to show the unity and support for each other that exists in the group.

I have never been more proud of the GSA group. Even when cleaners washed the offense paintings off, we were not done. We wanted to rise above the people and show that the GSA is a club that deserves respect. To everyone that helped the GSA and our members bring back the painting to its former glory- thank you. Through the negativity and hurt, I was showed that there is always still good through bad times. “I wanted to help, and maybe show who whoever did it that hate will not be tolerated,” Williams said.