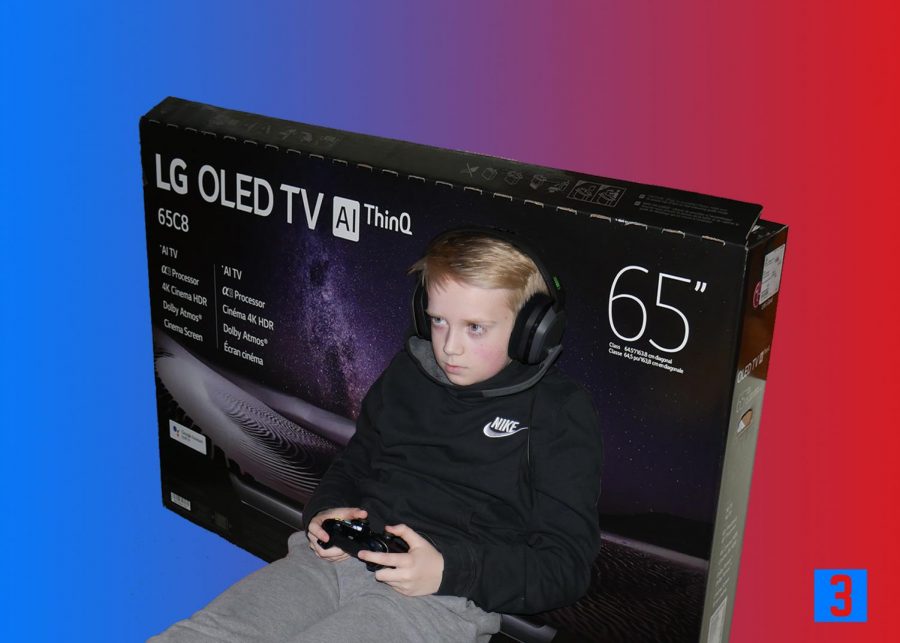 Everyone has those days that seem like they might turn out to be the best day ever, and just go horribly wrong. Saturday, November 3, 2018 was that day for me. It started off strong with a nine mile long run and breakfast pizza courtesy of Casey’s General Store. The Iowa Hawkeye football team was playing against Purdue at 2:30, so a couple hours before kickoff, my dad and I thought it would be a bright idea to haul out to a West Des Moines Best Buy and buy a TV (OLED and 65”, of course). We have been wanting a new TV for years, but have never pulled the trigger. Our current flagship TV has a line down the middle of it… so why not just go buy one when we are on a time crunch and it is raining outside? Quick aside: at the same time the TV impulse buy was going on, my brother was one day into not having his Xbox microphone working, therefore, we decided to pick one up while we were at Best Buy for him. This is important because Xbox (especially Fortnite) is a crucial function of communication for sixth graders. We got the TV home safely and brought it down to the basement to set it up as one does. Thirty minutes later, we had finished. It was finally time to unbox our new TV! We did, and all of the sudden we realized we had a massive problem on our hands. The top half of our new TV was razor thin, and it would be a difficult process to hang up above the fireplace. We were in over our heads. And the Iowa game started and we did not have a television to view. We put our brand new purchase back in its box and tried to fit together all of the styrofoam pieces like they once began. Luckily, at this point we were experts at mounting and unmounting TVs, so we quickly put our old one back up, and began the Iowa game which we had to record (watching a game on recording is not fun this day in age, due to the fact that you have to stay off your device and not have a Twitter feed to scroll by live). Alright, enough is enough about the TVs, it is time to talk about the Hawks. I am going to keep it brief–they lost to Purdue 38-36 in an ugly game. Yeah… My Saturday automatically feels worse when the Hawks lose. We even bought Casey’s donuts at halftime to see if they could help us rally. Nope, the Hawkeyes still lost and now we were unhealthier than when the game started. Now what? Time for my brother to play Fortnite with the bros. It was fine by me because I had my fair share of TV for the day. We wanted to see if the new microphone works. Guess what? It did not. And after trying every troubleshooting method, even calling some jerk at Xbox Support, we did not have a solution. All in all, Saturday sucked. It even extended into Sunday, because my dad and I wasted multiple hours of our Sunday night trying to fix the Xbox mic and it still did not work. I just want to forget Saturday, November 3, 2018.

In the past few weeks, I have been to the University of Iowa Memorial Union (IMU) twice. Once with the Black and White for the Iowa High School Press Association fall conference, and once with my parents for a visit to the U of I. Funny thing is, my dad worked in the basement of the IMU in the shipping and receiving department. On October 6, 1993, the Smashing Pumpkins came into Iowa City to perform in the IMU ballroom. During their midday soundcheck, he was working and got to watch them with a very small crowd of people. So as we sat in that ballroom 25 years later, he brought up the story, which has sent me on a complete Smashing Pumpkins binge. It is not that I never listened to them before, but they have been boosted up in my rotation.

Yung Gravy and I have something in common: Rochester, Minnesota. The 22 year old rapper originates from the mean streets of Rochester, which is also where several of my family members live or reside from. When I started listening to Yung Gravy, I thought his music was pretty unique in the way that it blends old music with rap, and tops it off with flexing through his lyricism and monotone, nonchalant tone. Also, before you click play below, know that his music is not safe for work (NSFW).

I have spent the past few weeks watching the second season of Ozark on Netflix. I do not want to spoil anything, so I will keep it brief–the show is absolutely brilliant. The acting is fantastic, the cinematography is on point, and it has me on the edge of my seat every single episode. 10/10, recommend.

The Book of Basketball by Bill Simmons

I love basketball, and I love Bill Simmons’ writing/content. I read his website The Ringer on a daily basis, and have listened to his podcast for years. I just started the book, which is an absolute beast (Approx 700+ pages). I will be reading it a ton over Thanksgiving break, and can not wait to further my basketball knowledge.