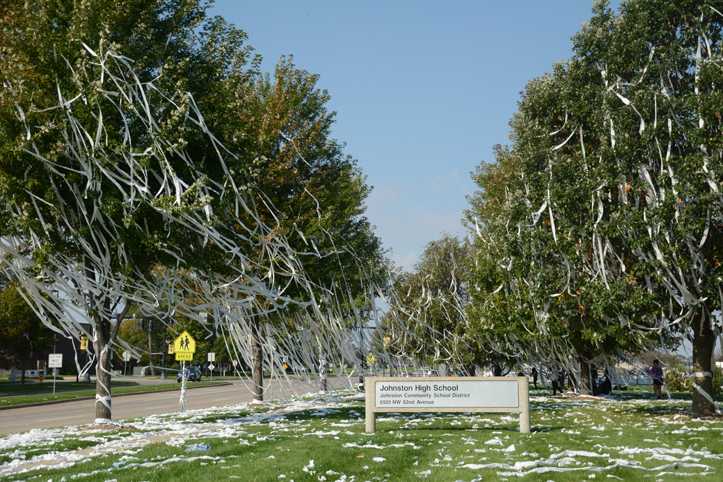 During the night of Thursday, Sept. 25, students began vandalizing the high school, instead of only the annual activity of TPing the trees on campus.

This year’s annual TPing of the high school on Thursday, Sept. 25 ended with a threat to cancel all homecoming events due to vandalism and illegal acts that occured that night. This led to an e-mail sent home by superintendent Dr. Corey Lunn in which the decisions made during the night were discussed.

​The e-mail was sent to the parents and teachers in the school district Friday morning. Lunn talked about what the police dealt with during the TPing.

​”Late last night, beginning at 11:30 p.m. and ending at 2:30 a.m., the Johnston Police Department dealt with a disruptive and disappointing situation on our JHS campus,” Lunn said in the letter. “Police responded to the site and informed the students that they were trespassing and needed to leave the premises.”

Students who were there, however, did not quite receive this message in the way that Lunn explained it. Senior Emma Thayer, who took part in solely the TPing along with 500 of her classmates, did not encounter the police. “The cops circled the school and never got out or did anything,” Thayer said.

​Juniors Alec Wray and Preston Arnold, both partakers in the TPing but not the vandalizing, did not hear anything about leaving either. They both stayed until the cops showed up and began circling the school. As they began to leave, they were on the street across from the school, and a police car pulled up next to them. The officer got out of the car, began walking to Wray and friends, then stopped and simply looked at them. “He never said anything, he literally just stopped walking and looked at us just waiting for us to run,” Wray said.

​Much later in the night, around 1 a.m, senior Chanel Terpstra remained with approximately 100 of her classmates across the street from the school. “(The police told us) ‘if you step foot on our property, you are subject to arrest. We own this street,'” Terpstra said. The students who were there replied with a classic football chant of ‘you can’t do that,’ often used when a referee makes a call against the other team during a sporting event.